There has been previous speculation about the next version of Xbox being called Xbox 8 and the latest news from China throws fuel onto this rumour inferno. The first and most obvious reason is that the new Xbox would be seen as part of the family of Microsoft Windows products with Windows 8 and Windows Phone 8 coming later this year. Microsoft showed a closer integration between mobile, gaming and desktop/tablet platforms at E3 last month. The company has however made no details available about the successor to the Xbox 360.

Reasons for the next generation Xbox to be called Xbox 8

Gaming and culture website Kotaku managed to get a quote from a Microsoft rep about the domain names “Microsoft often acquires various domain names as part of its ongoing business strategy, but beyond that we have no comment”. Also Fusible points out that another Chinese cyber-squatter owns the most important domain of all for Xbox8 - Xbox8.com.

Below, for your entertainment, we present several very poor Photochop jobs of would-be Xbox 8 logo designs found today scattered throughout the internet. 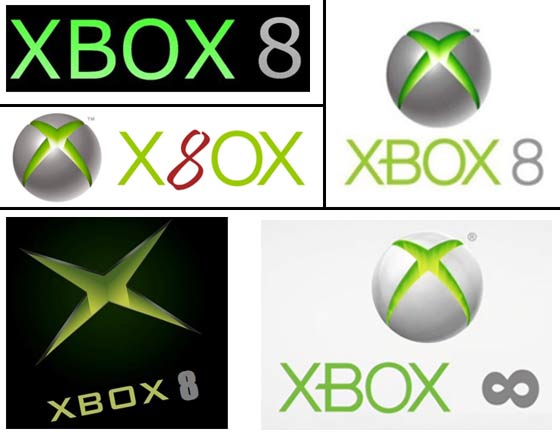 The Xbox 8 logo won't look like any of these

I particularly like the one top-right - thinking that it could be the basis of a neat boot animation, with the XBox “ball” as a sun rising and bringing with it the “XBOX8” name - a bit like the old Thames TV ident.
Posted by saltyzip - Wed 04 Jul 2012 11:32
I would call the new version just XBOX, applesque as with the new iPad.

It will probably be the last console of its kind before the likes of OnLive take over so lets just immortalise its name in it's pure and simple form.
Posted by McEwin - Wed 04 Jul 2012 11:53
“The Xbox 8 logo won't look like any of these”

Brilliant.
Posted by Dark Knight - Wed 04 Jul 2012 11:56
Well it would make the naming/brand more simplistic instead of 720 and with more future releases the numbers branding could get into the 1000's lol.

My only issue would be that this would actually only be the Xbox 3 but who cares the system should be a beast for console gamers.