Doom Eternal executive producer and id software studio director, Marty Stratton, has confirmed that the game will not launch with real-time raytracing support. In an interview with Digital Foundry, the key exec said that the development team had merely done some initial testing and explorations with real-time raytracing about a year ago. However, putting time and resources into ray traced graphical frills was soon halted as reality and deadlines started to bite.

Stratton's key quote, when asked about real-time raytracing support in Doom Eternal was the following:

"So we actually haven't talked about that at all, and we quite frankly haven't spent a ton of time (on raytracing). The team basically did some initial implementation and explorations - about a year ago. But at that same time we had so much that we wanted to do on the game still."

The above makes it sound like it was purely time and resources which prevented id from implementing the eye catching new graphical tech. Stratton adds that the developers were keen to use real-time raytracing, being the "biggest fans of new tech," and it wasn't easy to get them to give up their efforts with the "shiny new toy". The Doom Eternal executive producer re-iterated that getting the game out on time was high on his priorities and added. Importantly, that it be of "the highest polished quality," when it is released.

Looking to the future, Stratton said his development team are now starting to find time to check out raytracing tech again. However, he teased the tech might not be used in just the most obvious ways in future productions - not just for reflections, lighting and shadows - which is interesting. 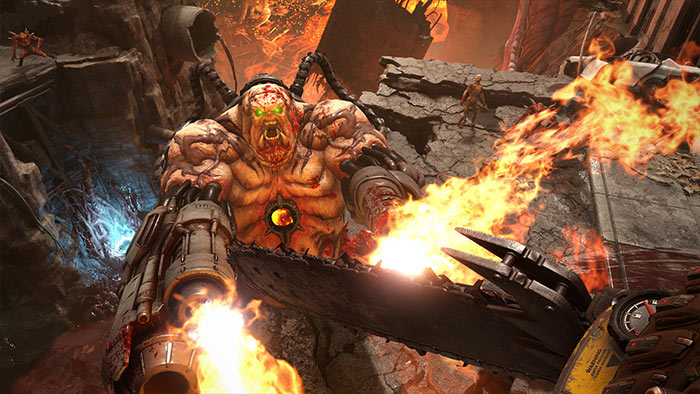 We saw the second trailer for Doom Eternal published about a fortnight ago. The game was originally scheduled for a November 2019 launch but is currently slated to be released on Friday, 20th March on PC, Google Stadia, PS4 and Xbox One.

I do hope that they release it as an add on later if they laid groundwork. I'd love to see RT in some more games to push things forward. I think that investing in the tech now is a bad consumer choice due to Nvidia's pricing strategy and marketing that is so overegged it could only not be bull if it Ray Traced everything so amazingly, it precipitated the second coming.

But more devs playing with it and maybe helping to justify GPU manufacturers investing to bring it into the realm of mere mortals has to be good.