Component juggernaut Corsair splits its wireless gaming headsets into three families. At the top of the design stack is the Virtuoso RGB SE, built for attractive looks and clean sound. Gamers with an urge for pseudo-7.1-channel sound are steered toward the Void range, while the latest HS Series straddle a middle ground of form and function.

Headlining this range from today onwards is the HS80 RGB Wireless priced at £140. 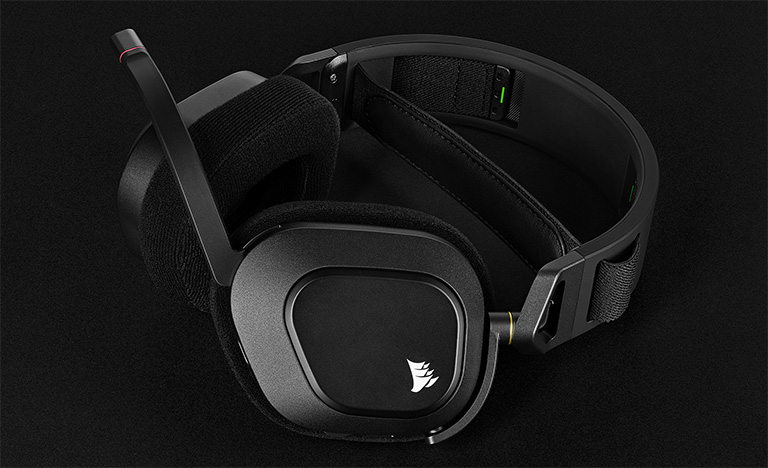 A couple of features are immediately obvious. Corsair eschews the oval earcups of the Virtuoso and HS70 and opts for design language consistent with the gamer-focussed Void range. I prefer the former for its simplicity and audiophile intentions but the aesthetic change is not a deal-breaker.

New to HS80 is what Corsair refers to as the 'floating headband architecture.' Rather than rely on traditional microadjustments, HS80 employs a far thinner, flexible band that's adjusted by positioning two Velcro straps contained within the main frame. It's a neat idea that works surprisingly well for a perfect fit, but it would certainly be aesthetically better if Corsair hid the adjustment fabric out of sight. It looks ungainly on an otherwise minimalist design.

HS80's 369g weight makes it feel portly but is consistent with other wireless solutions such as the Virtuoso. After using it for a few hours over the last week, the combination of the soft headband and plush (non-removable) earcups allay fears of long-term discomfort. 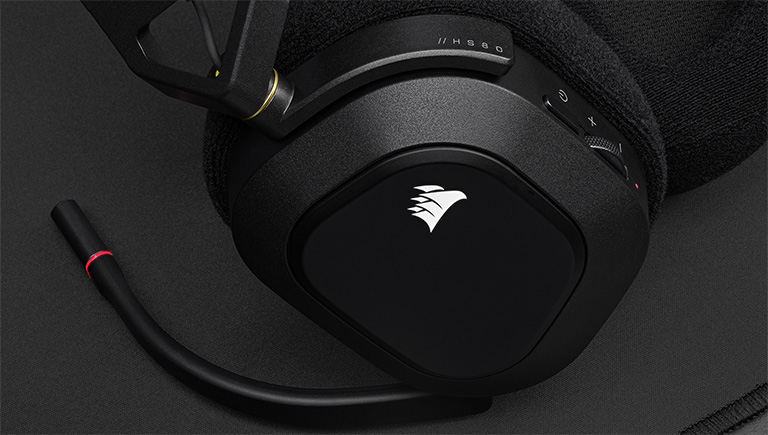 In keeping with recent premium Corsair wireless headsets, HS80 employs Slipstream technology for low-latency access. Getting up and going is easy: simply plug in the supplied dongle and Windows recognises the headset and installs appropriate drivers. The headset works as is, yet it's worth installing the Corsair iCue software for fine-grained control over lighting, sidetone settings, equaliser presets, and other useful features such as auto-shutoff times and toggling voice prompts.

When it comes to lighting Corsair thankfully keeps RGB restrained. It's only available on the sail logos situated on either side. One can argue RGB is verging on pointless for headsets - you don't see the results - yet Corsair does it better than most.

HS80 keeps to the simple design mantra by removing any touch-sensitive controls and keeping only the power and volume rocker on the left-hand side. I'd prefer the rocker to have more resistance between each step, but this is a personal choice. A Type-C port enables a wired connection to a Type-A via a supplied six-foot cable. 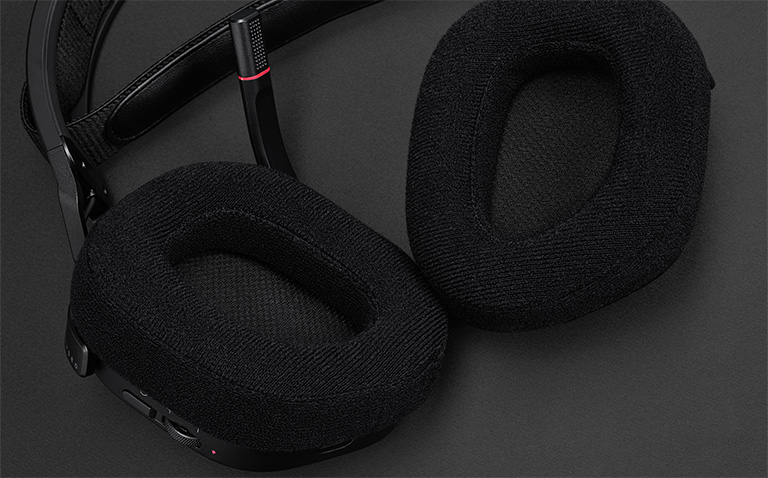 50mm drivers reside in each cup. Comparing back-to-back, sound quality is generally on a par with the HS70 I've reviewed previously, translating into a pleasant sound that goes loud enough without distorting. Overall, across music genres and multiple games, I prefer the HS80's acoustics, though absolute bass is somewhat lacking. Understand that you need to be wired in order to process top-quality 24-bit/96kHz sound; going wireless diminishes this to 16-bit/48kHz (CD quality). These cans are never what I'd term as audiophile, so users wanting the best possible sound quality will need to look elsewhere.

As before, PC users can jump onto the Windows Store and download the free Dolby Access App to avail themselves of some Atmos action. Bear in mind 15 or so games support it right now so it's more of a novel rather than must-have feature. HS80 can also be used wirelessly on a PlayStation 4/5 but not on an Xbox.

The non-detachable microphone is wonderfully bendy and moulds into exactly the right shape. Sound quality is solid, if unremarkable, and similar to other Corsair headsets, and it employs the same flip-up / flip-down for muting and unmuting. 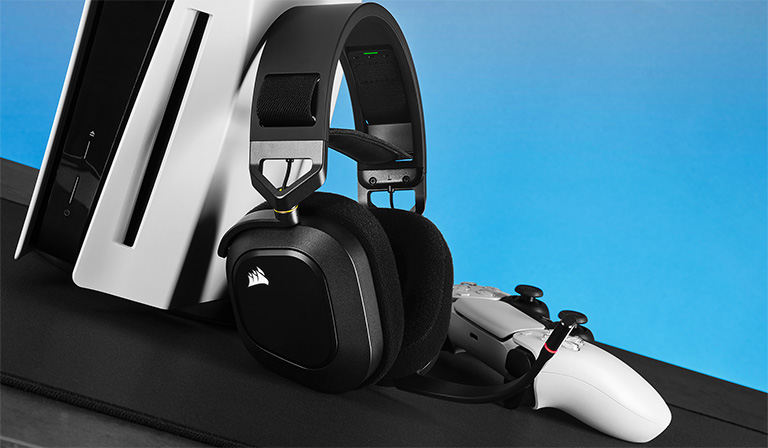 Corsair claims a 20-hour battery life. I managed about 15 hours with the RGB on, so HS80 will outlast even the most mammoth of gaming sessions. Charge indication is provided in iCue and via a traffic light system on the headset itself. A small LED shines green for good charge, amber for medium and red for low. As the LED is located to the rear, it doesn't interfere with gaming. Range is excellent, as the HS80 keeps good connection with the dongle from 30 feet and a floor away.

There's nothing intrinsically wrong with the Corsair HS80 RGB Wireless gaming headset. It does exactly what it says on the tin by offering solid design and more than passable audio quality, though I lament the lack of Bluetooth support that would elevate its versatility by a further notch or two.

It feels like the HS80 RGB Wireless exists to offer users a Virtuoso RGB SE experience at a lower price point. In that regard, even at £140, it succeeds.

The reviewed headset is available from Scan Computers.

Posted by ilh - Thu 19 Aug 2021 15:08
“Corsair claims a 20-hour battery life. I managed about 15 hours with the RGB on”
Keep it turned off then. I loathe the RGB obsession at the best of times but this is just getting ridiculous. It's a headset, it's on your head, you cannot see it, who is it that gives that much of a rat's arse about RGB that companies keep doing this pointless crap?