Next week the Worldwide Developers Conference (WWDC) starts in San Francisco and there is a lot of expectation that Apple will be showing off new software and hardware. Pundits are expecting more Mountain Lion details and iOS 6 information. On the hardware front there is speculation that some new or updated Apple computers or electronics devices will also be seen for the first time.

Today a photograph from a Chinese web forum has emerged purporting to be the spec list from the new 13-inch MacBook Pro refresh carton. The photo is reproduced below. 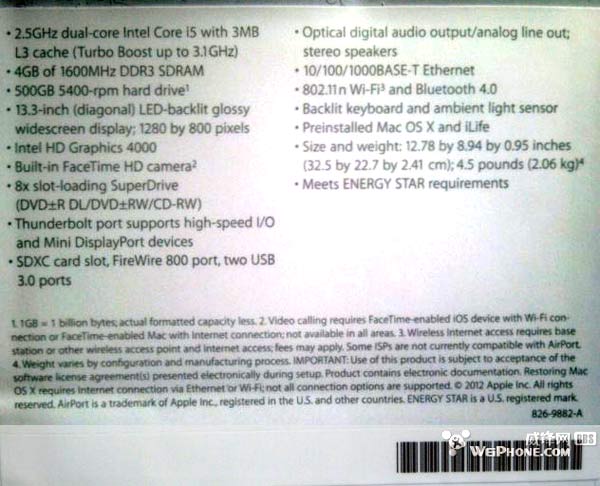 Reports at 9 to 5 Mac indicate that most of the Mac computer lines are shortly to be updated and the 15 inch MacBook Pro and some MacBook Air models will feature Retina display models. This leaked spec for the MacBook Pro 13-inch is, in comparison, rather unexciting. The main points of change are that the new MacBook Pro 13-inch will be Ivy Bridge based, feature Intel HD 4000 graphics, USB 3.0 ports and faster 1600MHz DDR3 RAM.

The MacBook Pro 13-inch refresh 2.5GHz processor detail corresponds to the Intel® Core™ i5-3210M Processor. That’s a slight upgrade on the previous versions 2.4GHz chip. The 13-inch display uses a resolution of 1280 x 800 pixels. The weight and thickness of the laptop remain unchanged.

Overall it seems like the leaked photo is of one of the least interesting new refresh models that will be announced at WWDC next week. This unsensational photo and February’s iPad logic board leak from the same Chinese forum, which proved to be accurate, gives credibility to these new MacBook Pro 13-inch specs. Apple hasn’t commented on the leaked specs.

There's more than just one variant for sale currently in any case. Chances are that there would be more than one after the next speed bump too.
Posted by this_is_gav - Wed 06 Jun 2012 12:47
1280x800! A new laptop with a respectable aspect ratio!

Still, it's an Apple, so nah.
Posted by bobharvey - Wed 06 Jun 2012 16:10
rather dissapointing. I was hoping for around 1500 vertical pixels this year. It is 2012 now, tha knows!
Posted by Roobubba - Wed 06 Jun 2012 18:10
16:10 should be the standard from my perspective, so on the one hand I applaud apple for this change. But nothing else: I want them to fix my work laptop which is only just over a year old and has died a horrible death twice, now. Awful, expensive, unreliable and slow computers :/ Still, where the sheeple follow, the other companies sit up and take note so perhaps 16:10 could be making a comeback. I will be maintaining my 24" samsung 1920x1200 monitor for as long as possible… It's been great for a number of years now and I have caps ready to make sure it runs for a good few more, until such time as I can get a tri-16:10 setup going, that is :)