It was very interesting to see Apple revamp its M1 silicon to coincide with the launch of the new MacBook Pro laptops last week. Perhaps even more eyebrow-raising were the new graphics performance claims. If you check back at our article on the launch, you will see that Apple claimed that the M1 Max SoC in the MacBook Pro 16-inch could deliver 4x the graphics performance of AMD's Radeon Pro 5600M GPU. The second rung M1 Pro, meanwhile, was still a decent 2.5X faster in graphics compared to the AMD GPU which debuted as the most powerful MBP option in June 2020.

Now the new Apple M1 Pro, M1 Max-powered Apple MacBook Pro machines have started to get into the hands of users and reviewers, we are starting to see the real-world performance of these laptops sketched out for us. PC heavyweight sites like AnandTech and PCMag have, in recent hours, taken a closer look at these machines in terms of graphics firepower than one might expect from 'the tame Apple press'. 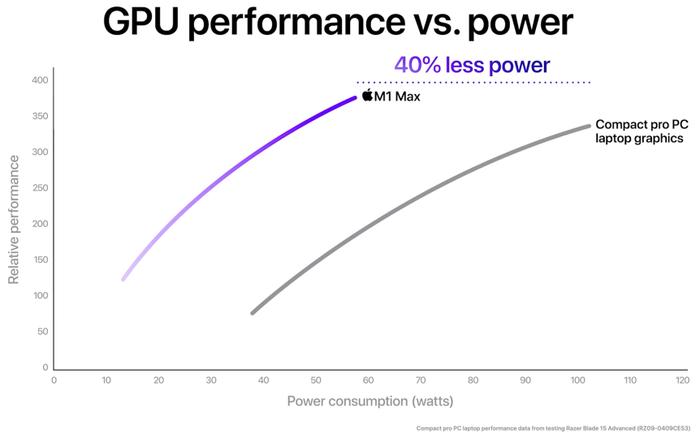 AnandTech's cold hard stare at the GPU performance of the M1 Pro and M1 Max has the most relatable gaming performance comparisons - including Shadow of the Tomb Raider, and Borderlands 3 – vs a throng of modern gaming laptops with up to RTX 3080 graphics. Meanwhile, PCMag looked only at GFXBench 5.0 synthetics, which will probably please Apple. 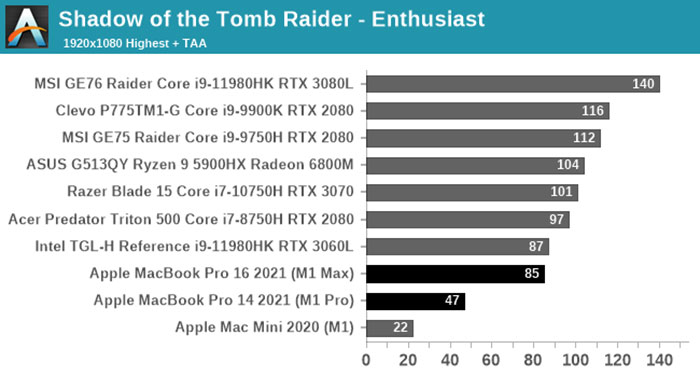 In brief, Apple's strong synthetic and productivity performance is impressive but "all over the place," to quote AnandTech's Editor Ryan Smith. However, gaming performance isn't accurately represented by the AMD Radeon Pro 5600M GPU comparison slide from the MacBook Pro launch (chart at top of this article). Apple Boot Camp isn't able to help, as it isn't available right now for M1 Macs, and Apple systems need to cope with x86 binary translation and an overall lack of gaming optimization for AAA titles.

Other important points from the Apple MacBook Pro reviews are; battery life looks great in reality too, the screens are great - but the notch might annoy some, the new 6-speaker sound system is a good upgrade, HDMI and SD card ports are welcome, and these systems are expensive. However, if you are a Mac user who professionally makes use of the Apple creative apps optimized for M1 (e.g. Final Cut Pro with ProRes and ProRes RAW support) this is probably a good upgrade to crunch through your workloads - if you need a portable and don't want to wait for the inevitable desktop M1 Macs with powerful new silicon.

Posted by CAT-THE-FIFTH - Tue 26 Oct 2021 10:17
Apple and hype - NEVER!! :clapping:
Posted by Tabbykatze - Tue 26 Oct 2021 10:19
I mean, pushing 85 FPS on quite a demanding title at the highest settings with TAA on effectively, an APU is no mean feat. I'd say that's actually quite a success considering every other configuration on that list is a dGPU. Obviously there needs to be a substantial amount of optimisation done but colour me impressed that they have an iGPU that competes with dGPUs quite successfully considering nearly no one has looked at optimising for Mac OS for gaming in a very long time let alone for the M1 processors GPU architecture.
Posted by [GSV]Trig - Tue 26 Oct 2021 10:25
Pretty sure I said that the performance increase they were shouting about would be in a test done with a specially optimised version of something…
Posted by CAT-THE-FIFTH - Tue 26 Oct 2021 10:27

Tabbykatze
I mean, pushing 85 FPS on quite a demanding title at the highest settings with TAA on effectively, an APU is no mean feat. I'd say that's actually quite a success considering every other configuration on that list is a dGPU. Obviously there needs to be a substantial amount of optimisation done but colour me impressed that they have an iGPU that competes with dGPUs quite successfully considering nearly no one has looked at optimising for Mac OS for gaming in a very long time let along for the M1 processors GPU architecture.

The M1 Max is around 425MM2 on cutting edge second generation TSMC 5NM N5P,and has double the transistors of a GA102 used in an RTX3090. It also has something like 400GB/S of memory bandwidth using very expensive soldered LPDDR5. Its significantly bigger than even the XBox Series X SOC which is well under 400MM2 on TSMC 7NM which is close to an RTX3060TI/RX6700XT in performance.All the Nvidia mobile dGPUs are on Samsung 8NM which not only is less denser than TSMC 7NM but also probably isn't as efficient.

It gets even worse,when it can barely match a mobile RTX3060(looking at other tests) too in the best case scenario. Now consider how an RX6600XT competes with the RTX3060 desktop model,and how a mobile RX6600 based dGPU is probably going to beat a mobile RTX3060.So a 235MM2 Navi 23 dGPU with only 224 GB/S of GDDR5 bandwidth using a 128 bit GDDR5 memory bus,and an 8C Zen3 SOC(which also has an iGP),is probably going to be as good as what Apple is producing on a process node which is at least one generation behind,using less die area and transistors too(and cheaper to make) with less memory bandwidth using cheaper memory.

Its going to be like the Intel dGPUs,which are using a sledgehammer approach on better nodes to try and defeat the opposition. But its quite clear AMD and even Nvidia are doing more with less transistors.

Another issue is the API Apple uses for its GPUs,which is very compute focussed,ie,Metal. But instead of replacing Metal with Vulkan they stuck with it. That is probably the biggest issue - if they had at least adopted Vulkan,it would make it far easier to code games to use the GPU in the M1. So you have the big issue of devs,having to not only code with DX12,Vulkan and whatever Sony uses in mind,but also Metal? Metal is worse than Vulkan for gaming workloads and Apple won't support the latter.
Posted by gagaga - Tue 26 Oct 2021 10:42
As ever they kill the benchmarks, but all a bit meh IRL. Nice machines, true, but…