HP has gained a reputation for letting slip details of processor generations before they become official. Continuing this trend, a listing spotted by Twitter-based momomo_us shares some key tech specs of an all-in-one PC line which lets the buyer choose between "Up to 12 Gen Intel Core i7 Processor and up to AMD Ryzen 7000 Series" CPUs.

At the time of writing the listing is still live, in outline, on the desktop computers product page, but when you click onto the thumbnail, it leads to an error page. Other key specs of these AiO computers that can be seen in the listing include the choice between up to a 1TB PCIe SSD or 2TB HDD, and a choice between Starry White or Starry Forest colour finish. Other than that, standard features include a micro-edge FHD display, pop-up webcam, dual speakers, emoji key keyboard, and Windows 11.

We have had plenty of pre-launch info about Intel's 12th gen processors, codenamed Alder Lake, and they are one option open to would be buyers. With this slim desktop, HP is probably going to be using laptop processors from Intel, and from AMD. 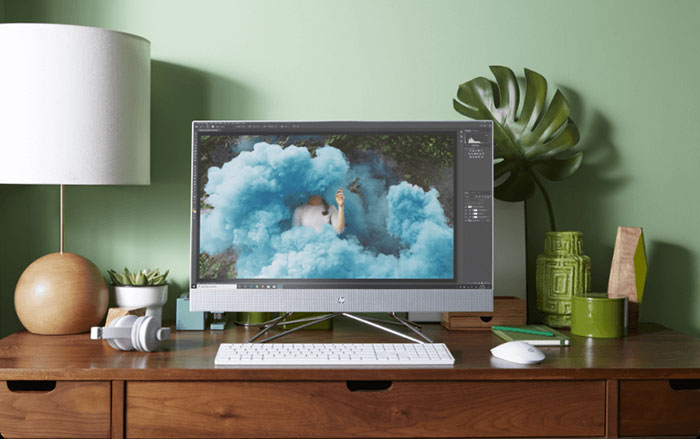 So, what could the mysterious "AMD Ryzen 7000 Series" be? Firstly it could be a typo, written instead of Ryzen 7. However, that is probably too many keyboard errors in one go, and we are indeed seeing one of the first listings for a system packing an AMD Ryzen 7000 Series processor. If it is a mobile part, then for this form factor we would be looking at Rembrandt H in early 2022. See the roadmap below, but if this is the case then this AMD-powers AiO will use Zen3+ cores and Navi2 graphics in a TSMC N6 process chip running at up to 45W. Rembrandt U may feature a high security processors (HSP) and supports LPDDR5, PCIe4 and USB4. 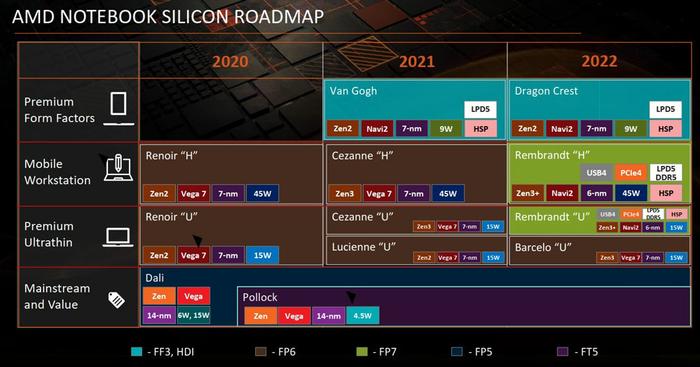 Intel's ADL-P and -M processors for mobile applications, and AMD's latest entries for this market, are expected to debut at CES 2022. HP's listing indicates its next gen AiOs are "coming soon," but seem to be about three months away from launch.

Update 13th October: If you visit the HP product page now, these AiO computers from HP are described as featuring "Up to Pentium Silver J5040 or up to Ryzen 7 5000 Series Processors". Getting both the Intel and AMD CPUs wrong is quite a big error on HP's part.

Posted by zaph0d - Mon 11 Oct 2021 12:08
My guess is that the 6000 series will be the Zen3+ with the extra cache on chips and microcode improvements still on an AM4 and AM5 compatibility but ddr4 only and the 7000 will be AM5 ddr5 Zen4
Posted by Saracen999 - Mon 11 Oct 2021 12:17
I do wish they (meaning mainly AMD and Intel) would just tell us what spec, and their best estimate of when. Then, I could at least make an informed decision, based on my needs and wants, and that spec/timetable, of wait versus buy now.

This drip, drip of leak and speculation drives me utterly nuts.
Posted by DanceswithUnix - Mon 11 Oct 2021 12:39

There was never a desktop 4000 series was there, and HP have long been the cause of oddball parts from AMD (including ISTR that lovely Athlon 5200+ dual core that unlocked to a quad core Phoenom).
Posted by cheesemp - Mon 11 Oct 2021 14:26

Saracen999
I do wish they (meaning mainly AMD and Intel) would just tell us what spec, and their best estimate of when. Then, I could at least make an informed decision, based on my needs and wants, and that spec/timetable, of wait versus buy now.

This drip, drip of leak and speculation drives me utterly nuts.

I think its a deliberate act to stop you preordering a competitors product now. Keeps you guessing rather than preordering and also allows them to tweak the product at launch to ensure they beat the competitor. I suspect Intel/Amd have a list of possible power limits/frequencies/pricing but if they let it all go now it gives them nothing to change should competitor drop something 3% faster!
Posted by QuorTek - Mon 11 Oct 2021 15:10
which chip would die first… would be Intels as its clocked hard already.