As Apple has continued to shift towards consumer electronics and non-traditional computers, its Xserve systems have started to look increasingly out of place. Now, the company has announced that it is finally departing from the rack-server market, and will stop selling the servers as of January 31 2011.

The Xserve 1U systems were launched in 2002 with PowerPC G4 processors, but transitioned to Intel Xeon CPUs with the rest of Apple's systems in 2006. Even though sales will end, the company will continue to provide full support, including honouring all warranties and extended support programs. In an effort to aid anyone currently using an Xserve, the company has prepared a handy transition guide (PDF). The document recommends either moving to an all new Mac Pro-based server - which is now available on the Apple web-store - or a Mac Mini running OS X Server. Despite Apple's assertion that the Mini is the company's "most popular server form factor", we doubt there will be too much interest, especially since performance is - by Apple's own estimates - around 25 per cent that of an Xserve system.

In fact, we really don't foresee either of these alternatives finding much favour with current owners, as neither is capable of offering the same sort of feature set as a rackmount server.

Though it's not clear if Apple is exiting the rackmount market for good, the company has categorically stated that it isn't developing a future version of the Xserve. In honesty, given this news we'd also be surprised if the server edition of OS X stayed in development for much longer.

Posted by kingpotnoodle - Fri 05 Nov 2010 16:09
At the prices they wanted for them I'm not surprised if they had trouble shifting them. £2451 for a basic config with single CPU, 3GB and a 160GB SATA drive is daylight robbery! Sitting in a datacentre rack style and “magic” don't really count as selling points…

You'd have to have software that ONLY ran on OSX Server to even consider one.
Posted by b0redom - Fri 05 Nov 2010 16:50
Really, unless you're after a super high end setup (where IBM/Oracle are still playing), nothing can compete with Linux on Intel. Sure people are buying Microsoft servers etc, but bang for buck, I'd go Linux almost every time…. and I like Apple stuff.
Posted by MrChimpy - Fri 05 Nov 2010 18:19
There are some applications where you absolutely need OS X in a datacentre - running an OS X only binary for example. I've been in one such situation recently. We opted for Xserve and they're not bad boxes - but hugely overpriced and immature compared with established rack kit. For example the SATA drives will merrily pop out if pushed - that's not behaviour you want in a critical environment. The rack kits are also like something out of a museum - it's a bit galling having to screw rails together when you're used to cheaper servers with sprung mounting kits.

That document seriously touts 2x mac pros in 12U as a solution. 12U! The mac mini doesn't have server level poke at all.

This move really pisses on some people's chips. Some people were using OS X for heavy stuff - BSD base and Xgrid etc. Just another instance of Apple being a rather dangerous partner. Xgrid was really nice - remember when they were pushing xserve clusters?

…and no, I can't rebuild my OS X binary and run it on linux. It's from Apple :) Hackintosh (in or out of VM) etc just won't wash in critical environments either.
Posted by mikerr - Fri 05 Nov 2010 23:23
Having removed Xserve from their store, apple have added a new standard “Server” configuration to its Mac Pro lineup: 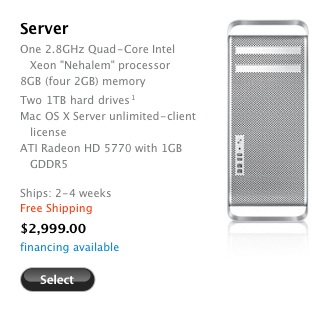