At the Apple 'Spring Loaded' event yesterday evening we saw a refresh of the iMac AiO computer line, and iPad Pro tablets, with 'Apple Silicon' M1 chips. Another product announcement was of the Apple AirTag, a Find My app-friendly tracker tag. Lastly, there is a new purple version of the iPhone 12 on the way.

Apple's iMacs have had a big design shake-up to go with the new processors. Actually, Apple asserts that changing to the new M1 processor enabled a drastic redesign, facilitating "powerful performance in a design that's just 11.5mm thin". With a reduction in bezels here too, this new iMac with 24-inch screen, is only slightly larger viewed from the front than the previous 21.5-inch model.

Another thing that is immediately striking from the presentation is all the colours that the iMac is now available in – seven shades (blue, green, pink, silver, yellow, orange, and purple) with matching keyboards (compact or full layouts with Touch ID), Magic Mice, and Magic Trackpad accessories available.

The iMac processing upgrade is said to boost the AiO's performance by up to 85 per cent in CPU bound tasks, and the GPU is claimed to be 50 per cent faster than the previous best 21.5-inch iMac with discrete graphics. This isn't a new M1 processor, Apple uses the same M1 processor with 8 CPU cores and 7 or 8 GPU cores in the MacBook Air, 13-inch MacBook Pro, and Mac mini – which were revealed last November. In this iMac the logic board is fitted with two tiny fans, but they don't need to shift much air to keep the processors cool so won't generate more than 10dB noise, according to Apple. 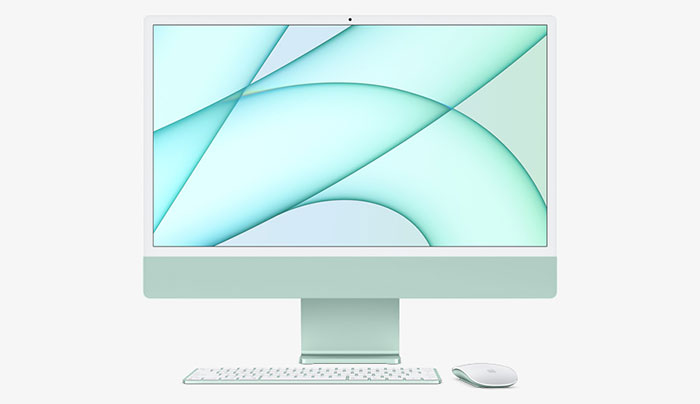 Another key feature of the new iMac, as an AiO, is the built-in monitor you have to live with (though you can plug in external monitors). This built in display is a 24-inch 4.5K 'Retina display' with a P3 wide colour gamut and over a billion colours, plus 500 nits of brightness, and Apple True Tone technology. An anti-reflective coating helps with readability on this flat screen.

Apple has improved the built-in camera, mics and speakers to make this a well-rounded AiO choice. It says the 1080p FaceTime camera is the best it has ever built in to any Mac, and is adept in low light situations. A three mic array employs directional beam forming to highlight your voice in noisy environments. The sound system with four woofers and two tweeters is particularly rich, and offers Dolby Atmos support.

Apple has fitted two Thuderbolt / USB 4 ports to the new iMac. Thunderbolt ports facilitate superfast data transfer devices and the connection of up to 6K displays. The two pricier iMac models come with a further two USB 3 ports (Type-C connectors again) and an Ethernet port in the iMac's power adaptor. All new iMacs come with built-in Wi-Fi 6 and Bluetooth 5.0. 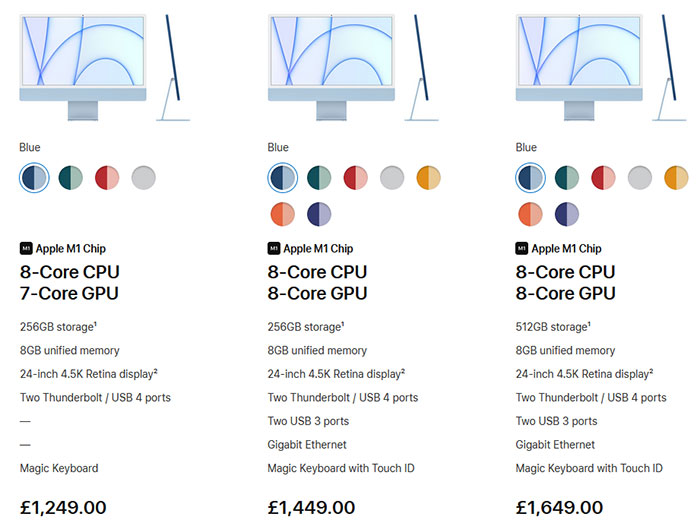 Apple is making the new iMac available to order from 30th April with availability starting a couple of weeks later. In the UK iMacs are priced from £1,249 to £1,649, as you can see in the screenshot above.

As per our headline, the iPad Pro has had an M1 revamp too. The upgrade delivers 50 per cent more compute performance and 40 per cent faster graphics, according to Apple. Storage is now twice as fast, with a new 2TB configuration available. Like the new iMac, top models with 1TB or 2TB of storage come with 16GB of onboard RAM (otherwise its 8GB). The latest iPad Pro comes with 5G with eSIM support. For wired connectivity support the USB-C port on the new iPad Pro is Thunderbolt and USB 4 compatible.

Apple has fitted its new Liquid Retina XDR panel to the new iPad Pro 12.9-inch model. This screen features a mini-LED backlight among its many charms, as you can see from the infographic, below. 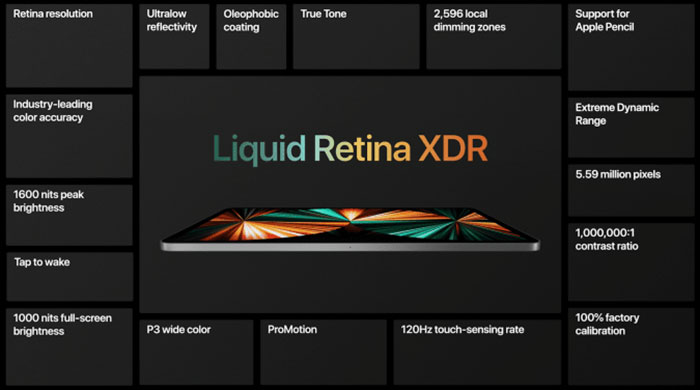 If you are interested in these iPads they are available to order from the end of this month with stock arriving in the second half of May. Pricing starts at £749 for the 11-inch iPad Pro, with the 12.9-inch model costing from £999. Pricing will rise if you want more than the base amount of storage (128GB) or you want Wi-Fi plus cellular connectivity. Users will get 8GB RAM on models with 128GB, 256GB, or 512GB storage. 16GB RAM is installed on models with 1TB or 2TB of storage.

simonpreston
Part of me wants to buy one. Another part of me sees 8GB RAM, and 512GB storage for just under £1700.

If this was running a full OS without all the restrictions on software/usage that iOS has then it wouldn't feel too bad (and in all honesty, I'm expecting OS-X on iPad Pro sooner rather than later).

Not to mention I'm not exactly a fan of what they've been doing of late business wise when it comes to competitors.

The new airtag is clearly a tile copy (with some updated tech) and greater integration into the OS without all the restrictions they'd stuck onto tile (and others like them) a few OS updates ago in the name of ‘privacy’….. who's going to go with a competitor when you've got to jump through hoops to use it properly when apple's own version just works…. tile have a complaint with the EU over this iirc, along with spotify regarding subscription fees etc
Posted by darcotech - Wed 21 Apr 2021 11:27
So the premium over the same MacMini is the whooping 750£.

darcotech
So the premium over the same MacMini is the whooping 750£.

Knowing that hardware costs Apple even less then with Intel, we can say Apple attained new (very very high) level of greediness.

darcotech
So the premium over the same MacMini is the whooping 750£.

Knowing that hardware costs Apple even less then with Intel, we can say Apple attained new (very very high) level of greediness.

To be fair you can put some of that premium on the display being used and while I hate the marketing spiel Apple uses for their displays they would cost a fair bit (at least on the 12inch iPad Pro) due to the ‘quality’ of the output etc.

Still agree with the greediness side of things but to be fair part of that is down to shareholders wanting to keep making money when anyone with common sense can see that Apple is majorly overvalued on the shares front… what exactly do they have worth a lot of value if they lose iPhone/iOS users, they're not like MS (similar value etc) with their diverse portfolio of things making them money and increasing in some areas too.