You are here:
Hardware Wii News 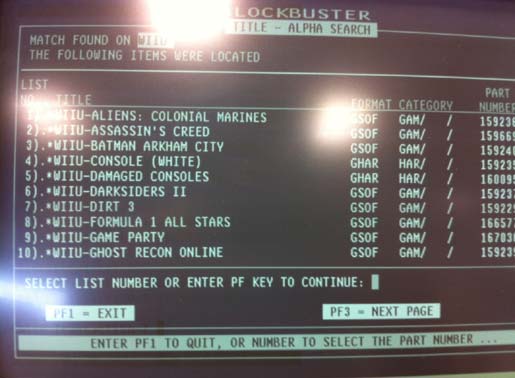 The full list of "launch titles" published in the leak at GoNintendo.com is as follows.

Some of the titles in the list have been previously announced but some others are unannounced or unknown titles. Officially the launch games lineup will be unveiled at the E3 event in Los Angeles next month. Only then we will know if this Blockbuster UK list is accurate.

The Wii U launch is crucial for the future of Nintendo as a games hardware company, as we know from the recent poor results. A strong launch campaign and equally strong launch games lineup is imperative, will these titles be enough to propel the console to a sustained bestseller position? Lets hope the prices of the console and games are competitive in the first instance.

17 Xbox Series S Lockhart to be revealed this August

Lower-end Xbox Series X sibling is expected to be a much cheaper route to next-gen gaming.

Posted by Whiternoise - Tue 08 May 2012 07:18
Wake me up when there's new IP on the list.
Posted by Pleiades - Tue 08 May 2012 07:19
TBH None of those sound particularly amazing so it might come down to the innovative/intuitive controls, as with the Wii. Personally, I wish Nintendo good fortune, and hope they can continue to make the hardware as well as the games. Still miss Sega's consoles (especially the Megadrive, though Dreamcast had its own allure too)…
Posted by Noli - Tue 08 May 2012 09:31
A surprising number of ‘grown up’ titles but I imagine they're all castrated in the graphics & gameplay department compared to their pc (and even xbox) equivalents.
Posted by Spud1 - Tue 08 May 2012 09:43

Whiternoise
Wake me up when there's new IP on the list.

Exactly what I thought when I read that list. We've just been through (ok going through) yet another generation of remakes with the 3DS, and in that case these games do feel fresh and new again (its been 10 years since I played zelda, star fox etc) but I don't want to be doing the same sort of thing again with the Wii-U.

Noli
A surprising number of ‘grown up’ titles but I imagine they're all castrated in the graphics & gameplay department compared to their pc (and even xbox) equivalents.

Doubt it given the Wii U is more powerful than the Xbox and PS3 :)