Earlier this week, Nintendo released its latest quarterly financial results for investors and analysts to pore over. During the most recently completed quarter, ending 30th June, Nintendo Switch hardware sales totalled 4.45 million units, and software sales totalled 45.29 million units. This means that Nintendo has now shipped 89.04 million Switch consoles since the product launched, making it the 7th biggest selling console of all time. 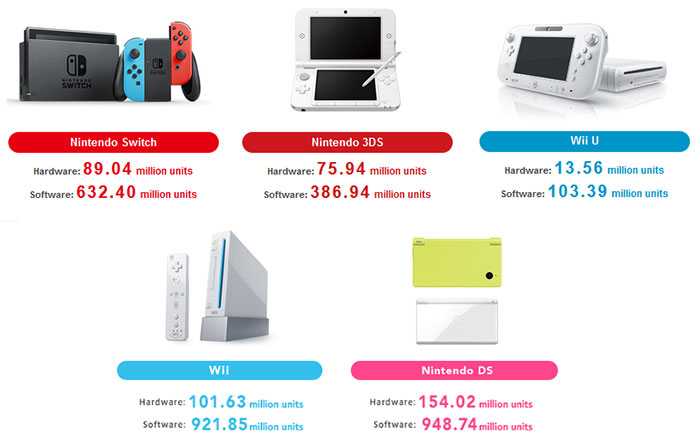 We are nowhere near the end of the line of the Nintendo Switch though, its popularity looks like it still has many furlongs to run, and the recently launched Switch OLED version (coming in October) should help over the next few months/year. Thus, it is quite confidently predicted that it will outsell the hugely successful Wii in the coming year (101.63m units sold). The venerable Game Boy (118.69m) is in the Switch's sights too, but that might be a target for 2023.

To put the shipment numbers in perspective, it is worth looking outside of Nintendo land. Current-gen rivals like the Sony PlayStation 5 and Microsoft Xbox One X/S are hardware shifting tiddlers compared to the Switch, with approx 10m and 6.5m sales total to date according to most recent figures and estimates.

On the topic of Sony and Microsoft comparisons, the Switch has now outpaced consoles like the PS3 (87.4m) and Xbox 360 (86m). Nintendo's hybrid console hasn't reached the level of success of the iconic PS1 yet (102.63m) but it looks set to do so in the next few months. Perhaps the biggest prize will be the toppling of the Sony PS2, which at 155m lifetime sales, still holds the number one spot just above the 154.02m tally of the original Nintendo DS.

Of course, a large part of any Nintendo console's success comes from the exclusive gaming titles, many of which come from Nintendo itself. With this in mind, it is interesting to see what Nintendo has lined up, and the following list was compiled from new information given to investors during the recent results publication, via Nintendo Life.

Scycekiller
They may pass it in sales, but they will never surpass Wii Sports for peak gaming perfection.

Wii Sports Resort for me - table tennis!
Posted by bae85 - Sat 07 Aug 2021 09:04
I applaud Nintendo for sticking to their guns of innovating and putting fun first and foremost in their priorities. When the Switch came out I was nonplussed about it, but here I am a few years down the line, one of my kids has one and my other one will get one soon maybe for xmas, and it is amazing. It does exactly everything you could ask for and does it well, honestly can't find any faults with it.
Posted by aniilv - Sun 08 Aug 2021 01:26
The only console i have spent money on buying games for. The portability and family friendly titles are worth it.
ps or xbox nowdays are just crappy pc's