SuperData observed that the demand for VR headsets outstripped supply during the recent holiday season. The games industry watching arm of Neilsen has just published a report with its XR (AR, MR and VR) projections until 2023, and the report includes recent market data on the segment. 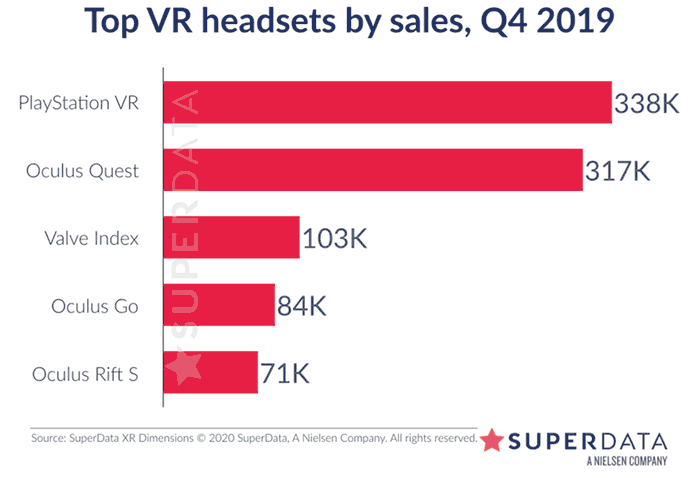 In the runup to Christmas 2019 you can see from the chart above that the PlayStation VR headset was a pretty clear winner in the sales stakes. It helps that the PSVR is one of the most affordable HMDs, added to the fact that it pairs with a popular well defined gaming platform like the PlayStation 4/Pro. 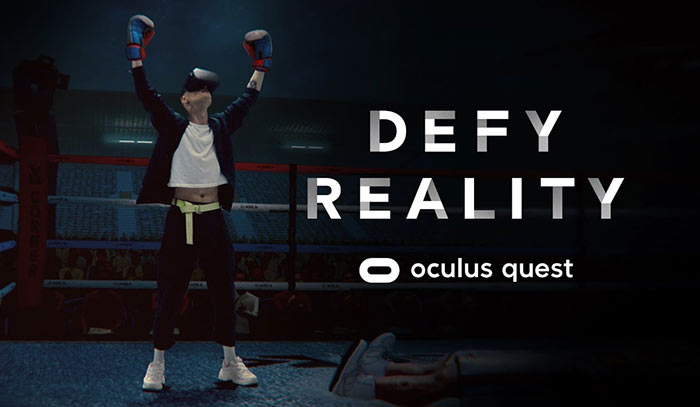 Less than 10 per cent behind the PSVR headset was the Oculus Quest. This is quite different to the original Oculus Rift, its successors and PC-tethered rivals as the Quest is a self contained untethered device (Qualcomm SD835, 4GB RAM, 128GB storage), with a pair of six degrees of freedom controllers, which runs using the Android OS. Like the PSVR the Oculus Quest has a low-ish buy-in price, and it became available last summer (at the same time as the Oculus Rift S) starting from US$399.

A particular observation of SuperData concerns the acceleration of sales of the Valve Index HMD in Q4 last year. Valve released this headset in late May and from then until the end of Q3 it had sold a modest 46,000 units. However, one has to remember the considerable price that Index kits (headset, controllers, base stations) go for, in addition to needing a modern gaming PC.

In November, coinciding with the 21st anniversary of the release of the original Half-Life, Valve announced Half-Life: Alyx. This "flagship VR" game would not be a VR version of Half-life 3 but an in-between 1&2 adventure in VR. In January HEXUS reported that the announcement of Alyx, due to be released in March, had causes a Valve Index sales surge resulting in worldwide shortages of these pricey HMDs. 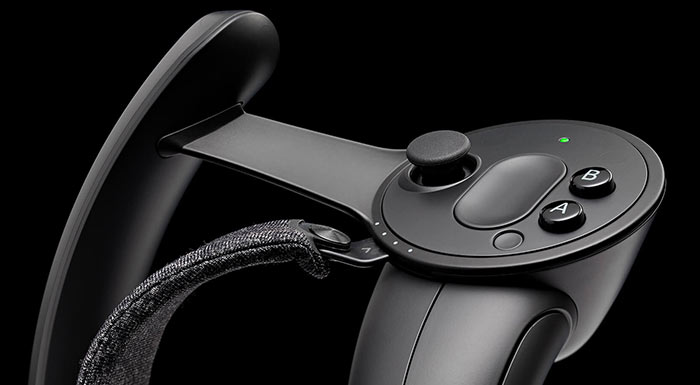 SuperData has quantified the sales surge as inspiring 103,000 Valve Index sales in Q4 2019. Even with its steep entry price the Index outsold all other PC tethered HMDs in the quarter. Undoubtedly it would have sold even faster if the stocks had been available. Research from the likes of SuperData is quite interesting to see as Valve is a private company which doesn't reveal details of its operations to the public.

Looking further ahead, the SuperData report reckons that "Earnings from AR/MR headsets like the HoloLens are expected to grow significantly in 2023 once form factors and price points that are acceptable to consumers become available". XR consumer revenue should reach $6.7bn by the end of the forecast period, a little under half of all XR revenue.

excalibur1814
…and eBay will soon find itself with a whole load of new listings.

And the sellers will find themselves making a loss rather than the profit they hoped for because not as many people are interested in VR as they thought?

It wouldn't surprise me if this demand wasn't natural, but rather speculators buying them up in expectation of profit from high demand.

I just can't see VR as being anything but niche, and can't see Half Life: Alyx as being enough in reality to convince so many people into the ecosystem. Maybe that is just my own lack of interest in going the VR route colouring my perception, but I just see it as similar to the 3D TV attempts, in that it's just a matter of time before manufacturers and content creators stop bothering again.
Posted by DanceswithUnix - Thu 30 Jan 2020 13:10

Output
It wouldn't surprise me if this demand wasn't natural, but rather speculators buying them up in expectation of profit from high demand.

It could be natural though. Those of us that played Half Life back in the day are getting on a bit now. Kids have grown up, starting to get a bit of cash again, why not splash out on a VR headset?

Christmas break is an obvious time to take the plunge too. I already had a headset, but did spend some VR money putting a PC in the living room so I can play stand-up games. Still need a new GPU in that rig, but more important family expenses first else an RX 570 would be winging its way already.

I suspect the blocking problem for VR soon will be lack of space for people to jump around in without punching TVs, vases etc. There is a wall I need to pad where I use mine :)
Posted by Output - Thu 30 Jan 2020 13:53

DanceswithUnix
It could be natural though. Those of us that played Half Life back in the day are getting on a bit now. Kids have grown up, starting to get a bit of cash again, why not splash out on a VR headset?

You make some fair points.

As I said, it could be my own lack of interest in going that route myself that's colouring my perception.