The portable PC gaming potential of the Steam Deck means it is a product with great appeal to many HEXUS readers. Naturally, with such an audience, there are questions about the internals and upgrade possibilities, and thus Valve's new teardown video is a welcome release.

Valve introduces the video as being an instructional episode, where users are shown how to open up the Steam Deck and replace one or more components. The video specifically addresses thumbsticks and SSD replacement. However, as the thumbnail shows, Valve thinks this kind of tinkering should be off the menu for most would-be users, and is best left to repair techs who tinker with computer/mobile devices day to day.

It only takes the removal of eight self-tapping screws on the back of the Steam deck to be able to pry it open with your fingernails. This on-screen action comes with dire warnings about self-tapping screw/hole wear, and the ease of breaking sensitive components through clumsiness or ESD. Valve also mentions something important about what you see on screen – final shipping versions of the Steam Deck might look somewhat different inside, such is the nature of product development.

Thumbsticks can easily become worn or break on controllers and consoles, so it is good to see them changed in the video. The video narrator says that all the components in the thumbstick assembly are custom for the Steam Deck, but in the next few months, Valve will work to make spares available. In the video, the modular thumbstick assembly with its own PCB looks quite neat and relatively simple to swap.

SSD swapping using off-the-shelf parts currently available "could cause problems," says Valve. It says the variable component M.2 2230 specs of devices on the market might impact; the power consumption of the device, electrical and mechanical interference, and thermals. Getting to the M.2 2230 SSD requires quite a few more screws being removed, as it is under some metal shielding in this tightly packed device. As a reminder, the narrator says that if you want more storage the easy solution is the microSD slot, which is "plenty fast enough" for the job. 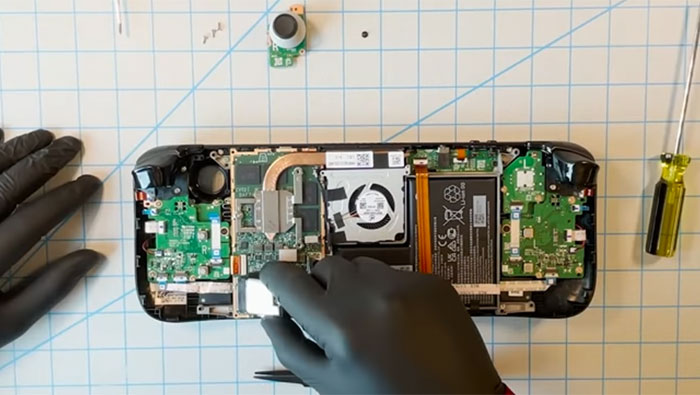 Valve is going to have SSD upgrades available in its eShop, as well as the aforementioned thumbstick components, and more. Remember though, repairs and modifications by general users aren't recommended, and the warranty doesn't cover the device being opened up by end users.

Posted by ronray - Thu 07 Oct 2021 14:23
I'm glad it looks like the parts subject to wear and tear can be replaced. This was my main concern with the design.
Posted by Nifl - Thu 07 Oct 2021 17:06
I love how informative they are about the dangers and the warranty doesn't cover damages you cause.
I also like how easy it is to disassemble.
Most competitors are like:
“Little sticky screw cover looks damaged -> warranty void”
and
“If you touch the insides you will die immediately and your house will explode”
and
“You will have to drill out the bolts to replace the keyboard”
Posted by Tabbykatze - Fri 08 Oct 2021 08:41

Tabbykatze
Aren't warranties being voided by that method now illegal?

From the LTT video I watched, it seemed like Steam phrased it quite carefully, and in a way designed to skirt that.

You have the right to open it up and monkey with it but won't be covered for any damage you do in the process. I took that to mean you can peel back stickers, or whatever, but if you cause damage doing it, on your head be it.

And I don't fault them on that, either.

The grey area, of course, could be in whether what you did is or isn't responsible for whatever is broken/damaged/faulty.