With millions more people working from home due to the ongoing global pandemic and space for many being at a premium, having a simplified working environment on the kitchen or dining table is easier said than done. Corsair understands this and, in the name of cable decluttering and flexibility, offers Thunderbolt 3 docks under the Elgato banner.

Moving with the times, the company has released a more consumer-focussed version carrying the Corsair name. Costing around £260 and known as TBT100 Thunderbolt 3 Dock, let's take a closer look.

Compatible with any Windows and Apple laptop or desktop featuring a Thunderbolt 3 port, the mains-powered TBT100 serves many purposes. A 66cm single-cable connection offers between 45W and 85W of power to the host computer depending upon which ports are in use, so it's useful for charging as well as providing expansion. Though it may be readily obvious, it's worth noting that, even though Thunderbolt 3 is carried over a USB-C cable, the dock doesn't work with computers featuring only Type-C ports: they need to have a TB3 controller inside, generally limiting use on Windows to modern Intel-powered laptops.

A medium-sized, fanless 100W charging brick is more petite and lower in capacity than the 170W beast accompanying the sister Elgato Pro Dock, but it is still by no means small. TBT100's front is more useful for consumers, too, as it features an on/off button and a USB-C port, both of which are conspicuous by their absence on the prosumer Elgato. A UHS-II SD card reader is also handy, as is the headphone jack. Being picky, a couple of front-facing USB-A ports would have been useful, and wouldn't it be great if some form of wireless charging was built into the top of the chassis; it's a perfect place to rest your phone.

Like the Elgato, pictured at the bottom, build quality is excellent. Both share high-quality aluminium construction and feel suitably premium, as you would expect at their significant price points. TBT100 measures 228mm long, 83mm wide and 25mm tall and weighs 446g, making it similar to you know what. We prefer the TBT100's design for a couple of reasons. The chamfered edges feel nicer in the hand and bottom grip is better as it uses two rectangular strips instead of four smaller feet that have less purchase.

There's no second downstream TB3 port for further connecting a slew of high-speed storage devices, which is a shame, and it precludes the dock from being considered prosumer. Instead, the rear is home to two USB-A (5Gbps), Gigabit Ethernet, a single USB-C (10Gbps), dual HDMI 2.0 (4K60), that single upstream 40Gbps TB3 port, power and a Kensington Lock. We'd also prefer a DisplayPort connector instead of second HDMI. It's worth knowing that 15W can be supplied to each Type-C USB port and 7.5W for Type-A, though the concurrent limit for all USB is 30W. There's no fan residing inside the TBT100 and the chassis becomes merely lukewarm after large file transfers.

Knowing that a laptop will receive at least 45W of power means most Windows Ultrabooks are covered for charging duties. Those using higher-powered MacBooks may run into charging issues when operating at full tilt. The 16in Pro model, for example, is bundled with a 96W adapter, but that's a corner-case issue.

Performance, as expected, is similar to the Elgato Pro Dock. We first connected a WD My Passport SSD to the front Type-C port and saw sequential read and write speeds of 1,012/920MB/s, which is very close to the figures obtained when connected directly to an HP EliteBook 830 business laptop.

Running the same drive on the USB-A ports via an adapter reduces peak bandwidth to 522/468MB/s, commensurate with the protocol's reduced potential. In other words, USB transfer performance is nigh-on identical to not having a dock between drive and laptop.

Thunderbolt docks tend to be very expensive as they remain niche products. The £260 asking fee is, however, about right when considered against relevant premium rivals from Belkin, CalDigit and OWC. In an ideal world, we'd like to see a DisplayPort connector, more, newer-standard USB, and most crucially of all, a downstream Thunderbolt 3 connector.

If you can't wait for Thunderbolt 4 to arrive en-masse in 2021 and need a high-quality dock to simplify that cramped working setup, the Corsair TBT100 Thunderbolt 3 is worth a shout. 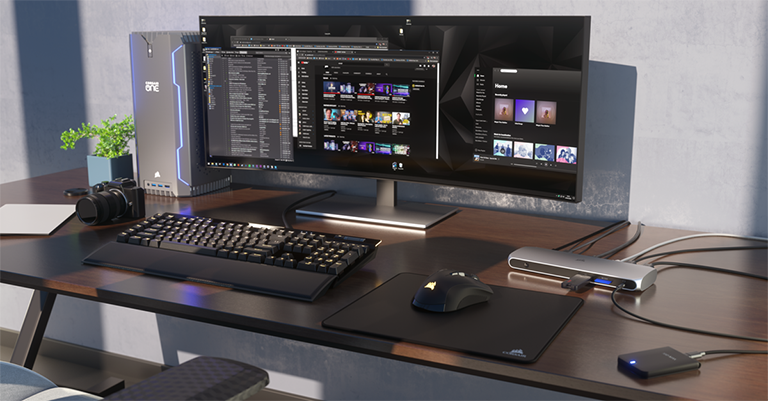 Posted by Tabbykatze - Tue 22 Dec 2020 14:28
The lack of USB-A ports meaning you'd have to have adapters galore makes this a non-starter for me.

At a bare minimum you'd have a wireless KB/M combo and a webcam which is both ports on the back done for (if you are a laptop closed person like I am).
Posted by kimgitz - Tue 22 Dec 2020 16:35
Waiting for a Thunderbolt 4/USB4 Dock with 4 port USB-C Hub (Thunderbolt 4 and USB4), Dual HDM1/Displayport, 10GbE with AVB support, 4 USB-A 3.2
Posted by gagaga - Wed 23 Dec 2020 12:18
The Lenovo and HP docks have better port selection and can be picked up on ebay for half this price.
Posted by b0redom - Wed 23 Dec 2020 13:57
I was looking for something similar for my MacBook Pro, as the keyboard is giving up and I can't be without it due to work. I ended up going for:

b0redom
I was looking for something similar for my MacBook Pro, as the keyboard is giving up and I can't be without it due to work. I ended up going for:

That dock is nearly double the price.