You are here:
Systems General News

HEXUS has reported upon compact / portable devices powered by AMD Ryzen Embedded processors previously. Just ahead of the New Year we reported upon AMD's efforts to help OEMS create a Ryzen Embedded mini PC ecosystem - new designs included a multitude of what you might call NUC-a-likes. Before that the highest profile devices that had a chance to get into consumer hands were the Smach Z handheld console PC, and the Udoo Bolt (120mm square).

Now DFI has launched what might be the most compact AMD Ryzen Embedded R1000 processor powered SBC (single board computer) yet. The new DFI GHF51, is credit card sized like the famous Raspberry Pi. In metric measurement terms that usually means 85 x 55mm but this board is actually listed at 84 x 55mm and described as a "1.8-inch SBC". 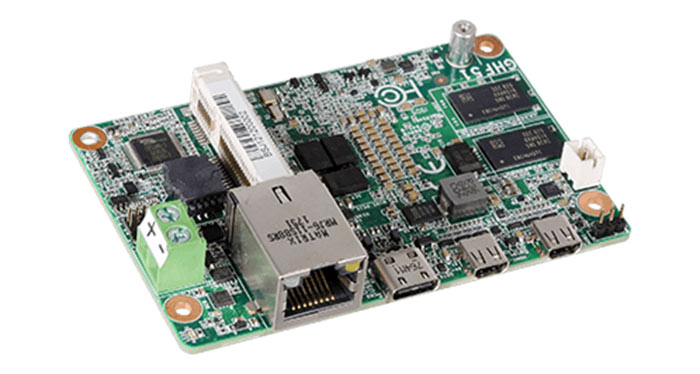 Rather than the Arm-based processor of the RasPi, the DFI GHF51 wields a 12-watt AMD Ryzen Embedded R1000 series processor. This is the dual-core brother of the quad-core V1000 processor. Actually there are two 12W R1000 SoCs listed on AMD's site, and we don't know which one this GHF51 will use. One is the 3.5GHz R1606G and then there is the 3.3GHz R1505G. Both of these processors have Vega graphics with 3 CUs, and the GPUs support H.265 video encoding and decoding, VP9 decoding, and support for displays with resolutions up to 4096 x 2160 pixels at 24Hz. Display connectivity is provided by a pair of micro-HDMI ports.

Other key specs of the DFI GHF51 are a choice of 2GB, 4GB or 8GB of single channel DDR4 3200MHz RAM (soldered). Storage choice varies from 16GB to 64GB eMMC. The GbE (RJ-45) networking port uses either the Intel I211AT or I210IT PCIe controller. There is a single USB 3.1 gen 2 Type-C port. DFI have furnished this SBC with an 8-bit DIO and 1x SMBus, as well as an fTPM 2.0. Board users will power this device via a single 12V DC 2-pin port, with basic settings saved via the CR2032 battery. OS choice is currently either Windows 10 IoT Enterprise 64-bit Linux. 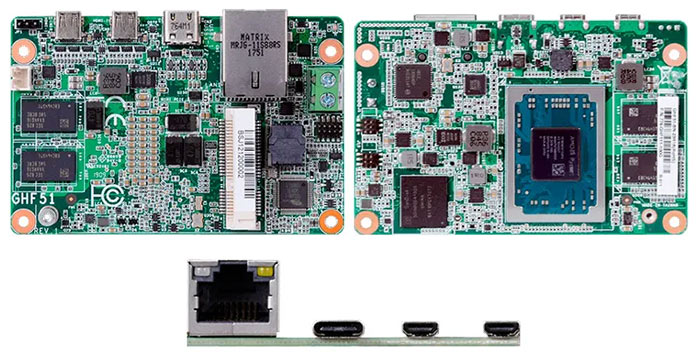 The DFI GHF51 details we see on the official web page are marked as preliminary. LinuxGizmos shares the important news nugget that this Ryzen Embedded device is expected to become available from Q3 this year. We don't have any indicative pricing though.

DFI has already 'launched' a credit card sized SBC based upon Intel's Atom Processor E3900 Series It is called the ALF51.