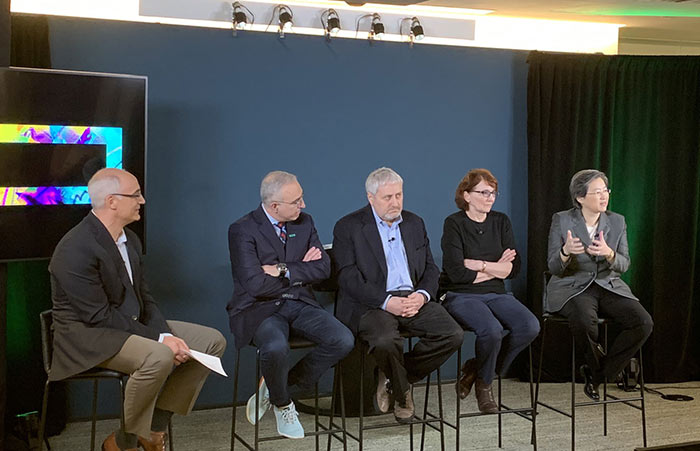 El Capitan's is expected to deliver in excess of 2 exaflops of double precision performance to researchers with access to facilities at LLNL. Some of the most important functions of El Capitan will be calculations to ensure the safety, security and reliability of the USA's nuclear stockpile. However, El Capitan will also be employed for the expanded use of AI and ML in research, computational techniques and analysis that benefits NNSA missions. 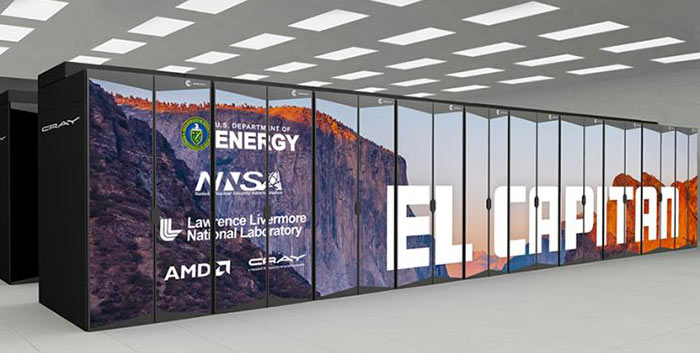 "This unprecedented computing capability, powered by advanced CPU and GPU technology from AMD, will sustain America’s position on the global stage in high performance computing and provide an observable example of the commitment of the country to maintaining an unparalleled nuclear deterrent," said LLNL Lab Director Bill Goldstein. "Today's news provides a prime example of how government and industry can work together for the benefit of the entire nation." 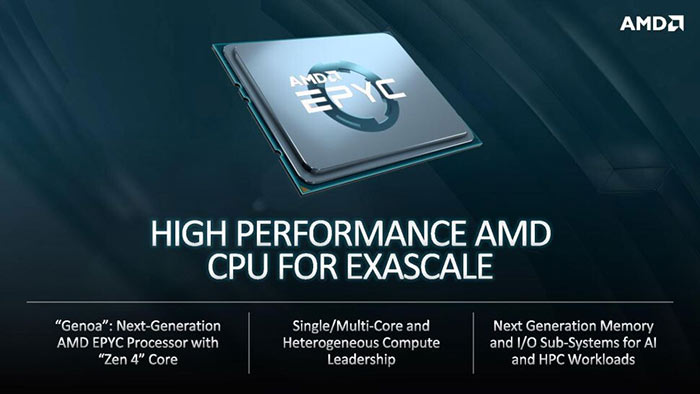 With El Capitan scheduled for an early 2023 turn-on, you will not be surprised that it will be powered by AMD technologies that are generations ahead of what is currently available. The AMD Epyc CPUs that will be used, for example, are next-gen parts, codenamed 'Genoa' and will be based upon the Zen 4 architecture. Similarly next gen Radeon Instinct GPUs will be used. AMD says that these GPUs will use the next- generation of high bandwidth memory and have been designed for optimum deep learning performance. Another important attraction of AMD's upcoming GPUs is that they are "anticipated to dramatically increase El Capitan’s energy efficiency as compared to systems using today’s graphical processors," notes the LLNL news blog. 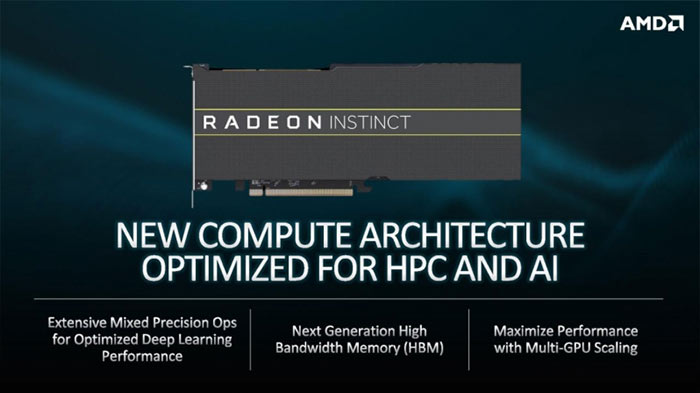 Bringing the CPUs and GPUs together will be the 3rd Gen AMD Infinity Architecture, which will provide a high-bandwidth, low latency connection between the single AMD Epyc CPU and four Radeon Instinct GPUs included in each node of El Capitan. AMD explains that this architecture allows for faster than ever unified memory access. Last but not least an enhanced version of the open source ROCm heterogenous programming environment is being developed to make the best of the hardware advances.

Posted by 3dcandy - Thu 05 Mar 2020 13:46
Will it run Crysis?
Posted by mers - Thu 05 Mar 2020 16:47
To hell with Crysis , can I play Solitaire on it ?
Posted by QuorTek - Thu 05 Mar 2020 17:33
I like how AMD can pretty much just sell the full packet and coming from same place probably even making it cheaper compared to the competitors, I also am looking forward to much more affordable products from all sides.
Posted by nobodyspecial - Fri 06 Mar 2020 14:51
Why is named in spanish? WTF AMD. WE are USA. I cringe every time I see companies waste money on spanish labels in USA. Total waste. You can't read english? GTFO. PERIOD. I have no use for you, and don't want prices going up because of dealing with your useless butt (Americans will gladly do your job if you are forced to work instead of handed welfare forever - no check if no 40hrs doing something we need done - force mcdonalds etc work on them - they want to stop doing that work get a better REAL JOB). You slow our schools, cost us money (welfare, healthcare, crime, drugs, etc), and disrespect our laws. Again, GTFO. Here's hoping trump rounds up EVERY illegal in 2nd term and deports them ALL. Get in line, or get out.

Most people that come legally pay a heavy price (some 50k and years to get in!), #1, and are forced to learn more than our own students do about our history/rights etc #2. That is no joke. I'd rather have a legal immigrant these days vs. today's SJW kid who can't get a job as school didn't teach JOB skills, just BS skills and hate. They hate america, the constitution, military (only reason they have a right to freely dis america to begin with), WORK in general and want everything free. That LEGAL immigrant, understands what our rights are for, how we got them (fighting/dying for it all) and VOTE that way to keep them. Why do you think dems hate them? LEGAL immigrants don't vote dem as they get that the “better life in america” (or the American Dream if you will), doesn't come from freeloading. Only illegals who add NOTHING to your bottom line vote dem as they are WELFARE dependant usually for life. Even dems say they finally pay their way at 80yrs or 3rd gen. Not interested in that length of time. If you can't pay your way TODAY, and have means to support yourself for a decade or more (time for you to get skills here, etc), go fly a kite. Everywhere else (mexico too!) have major restrictions and requirements to get in. You basically have to be completely covered with NO need for a job to get into mexico legally, living off your ALREADY gotten money for example. Nobody else imports useless people in such massive quantity. Nobody else takes in 1mil LEGAL people either. WE are #1 by far.

Not impressed with your naming AMD (or allowing it to be named that - English or FU on supercomputer CA). That is a name that could make me avoid your next gpu. CPU not sure, but NV gpu just moved up my list unless they just get trashed (99% sure this won't happen). IF I get a chance to avoid you, I will now. I see spanish and see red these days. Please pass Executive order forcing ALL spanish removed from USA everything. PERIOD. You are worse than our SJW kids if you can't even read/speak english and we have no use for you.

I'm sure it runs solitaire (good thing, govt workers like it), even though I'd remove it from any PC in my company ;)
Posted by VasilisPGR - Fri 06 Mar 2020 23:24
They named it “El Capitan” - “Captain” like it's the top powerful supercomputer.

The term “captain” derives from katepánō (Greek: κατεπάνω, lit. " placed at the top“, or ”the topmost"), which was used as title for a senior Byzantine military rank and office. The word was Latinized as capetanus/catepan, and its meaning seems to have merged with that of the late Latin “capitaneus” (which derives from the classical Latin word “caput”, meaning head). This hybridized term gave rise to the English language term captain and its equivalents in other languages (Capitan, Capitaine, Capitano, Capitão, Kapitan, Kapitän, Kapitein, Kapteeni, Kapten, kapitány, Kapudan Pasha, Kobtan, etc.).

If you get the point-meaning of the name, does it really matter from what language that word came or in what language it's written in? I think it's a great name.

Also “El Capitan” is the name of a rock formation in Yosemite National Park, California. :)