Qnap had a diverse range of products on show at the CES this week. However, it didn't go wild, keeping a focus on storage and networking but introducing some AI and new cloud experiences to the range spanning personal, SMB and enterprise products.

A highlight among the products announced, and winner of Qnap's buzzword bingo prize, is the new TS-2888X AI-Ready NAS. It provides an IOPS-optimized storage infrastructure that accelerates AI workloads plus the QuAI AI developer package enables a range of open-source tools and frameworks (including Caffe, TensorFlow, AlexNet, FaceNet, and more) for AI workflows. 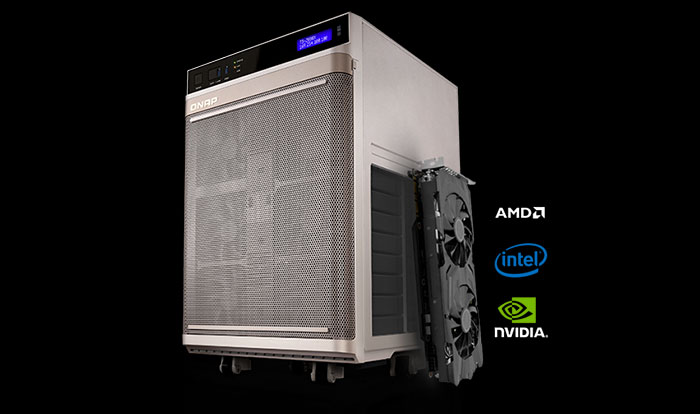 Moving onto some small storage/networking gadgets, Qnap's marketing manager showed us the cute QuLaLa - a portable external 2.5-inch storage with Thunderbolt 3 and management app. You can fit any kind of 2.5-inch drive yourself in this basic portable product which also plays nicely with iOS devices. Next, Oliveros picked up a compact Thunderbolt 3 to 10GbE adaptor which might be particularly useful for some thin-and-light laptop users.

The Qnap HS-453DX Silent Multimedia NAS, as launched in November, was on show as was a larger version that supports more drives. We also saw the new TR-004 which is a direct attached storage device - 2 bay or 4 bay versions of this Thunderbolt 3 NAS will be available. 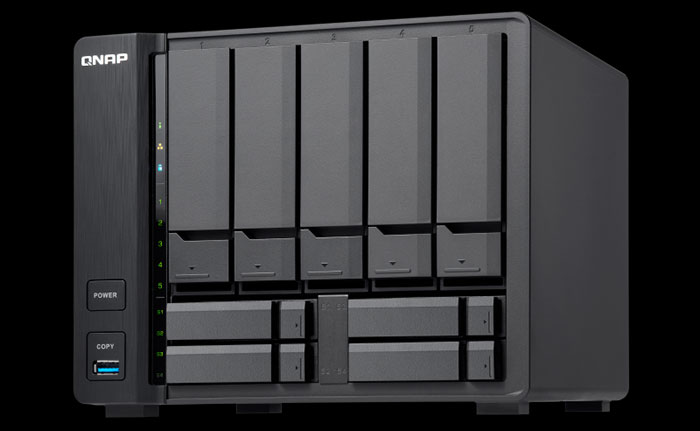 Moving up to SMB devices and the TS-932X is one of the firm's new 9-bay form factor NAS devices (pictured above). Interestingly, it combines five 3.5-inch SATA and four SSD bays and uses an intelligent algorithm to keep the hot data on the faster SSDs while less frequently accessed cold data is shuffled along onto HDD.

Lastly, Qnap told us about their new Thunderbolt 3 NAS series with 4, 6 and 8 bay options, aimed at creatives, and a revamped AMD-Ryzen powered NAS series with 6, 8, or 12 bays.

Posted by Tabbykatze - Fri 11 Jan 2019 11:32
I'm liking that TS-932X, it means for SMBs they don't have to mess around with Freenas and custom hardware. Plug and play!
Posted by Slogbelly - Wed 16 Jan 2019 00:25
I love my NAS. Almost 900 movies, just wish the house had wired ethernet as there is one section in the house (where the TV is) that gets just so-so signal and for some reason the NAS buffers sometimes.
Posted by aidanjt - Wed 16 Jan 2019 00:56
I like that the TS-932X uses a single 140mm fan, nothing annoys me more than rackety NAS units. Too bad about the CPU, I'm sure it'll be alright for a few people in a small business punting a few moderately sized files across to each other, but it's garbage town for media consumption.