Working from home with the occasional trip to the office has become common practise for a growing number of people, and balancing between the two can take some figuring out. When it comes to data, and sharing documents between both locations, a NAS can be a valuable addition to the workplace.

These turnkey mini PCs can serve as your own personal cloud, and though the availability of new and existing models has been affected by the global chip shortage, we are starting to see some return to normality. Qnap is eager to get the wheels back in motion and has launched a refreshed four-bay unit aimed specifically at the home office or small business. Enter the TS-451D2. 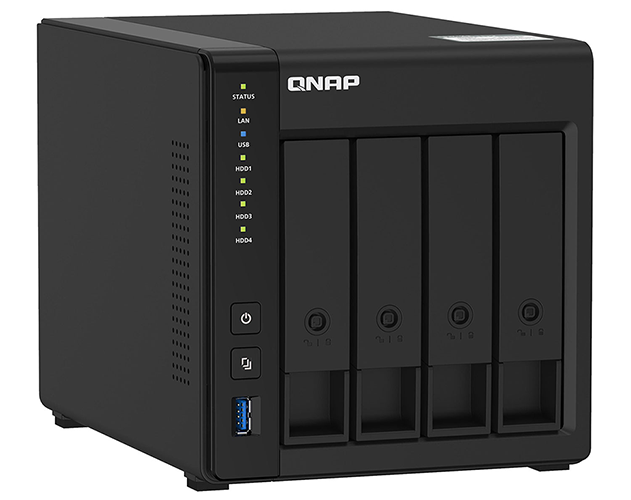 Priced at around the £430 mark, and with stock available at the time of writing, the new addition to Qnap's vast portfolio attempts to offer the core essentials without breaking the bank. £430 is hardly pocket change, mind, and remember the fee is a for a diskless configuration; add, say, a quartet of 4TB NAS-specific hard disks and you effectively double the initial outlay.

From a visual perspective, Qnap's black chassis hasn't changed a great deal over the years, and it's a shame the Taiwanese manufacturer hasn't used this opportunity to spruce-up the 165mm x 160mm x 219mm box. The column of LEDs is fine for at-a-glance status of drives and connectivity, we appreciate the front USB 3.2 Gen 1 port being accompanied by a dedicated one-touch copy button, and if you've little ones in the house, it is helpful to know that all four SATA 6Gbps bays are lockable. Do note, however, that the drive trays are plastic, and the basic locking mechanism is unlikely to stop a determined thief.

Beneath the hood resides a dual-core Intel Celeron J4025 processor allied to a quick 4GB pool of DDR4 memory. Qnap does officially state that a 2GB model will also be made available, though limited visibility suggests the entry-level unit may not be making its way to UK shores. We'd argue that 4GB ought to be the minimum on a four-bay unit, and we like the fact that both SO-DIMM slots are easy to access with the drive trays removed. Both slots are staggered on the inner-left wall, behind the power button, and adding a second module to elevate the TS-451D2 to 8GB is a simple and relatively inexpensive upgrade. 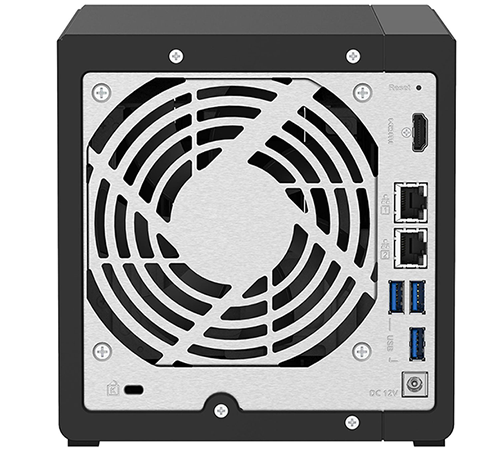 Around back, alongside the variable 120mm cooling fan, are all the ports a home-user is likely to need. These include HDMI 2.0, allowing for direct output of 4K60 content, two Gigabit Ethernet ports with support for link aggregation, a further three USB 3.2 Gen 1 and a 12V connector for the external 90W power brick. Do note that only a single Ethernet cable is included in the retail box, so you will need to source additional patch and HDMI cabling to make the most of the available ports.

Qnap covers the expected bases, and it is nice to see that USB 2.0 has belatedly fallen by the wayside, however users seeking an element of future-proofing may lament the absence of certain features. Forward-looking 2.5GbE network ports haven't made the cut, and upgradeability is hampered by the absence of a PCIe expansion slot. Such goodies are available further up the Qnap ladder, with the existing £520 TS-453D serving as a better fit for high-speed networks.

The TS-451D2 is ultimately an incremental upgrade over its predecessors, yet HDMI 2.0, faster DDR4 memory and USB 3 across the board represent useful gains, and with a 64-bit Intel Celeron processor at the helm, there's performance to cope with business features such as hardware AES-NI encryption and home-user value adds including real-time media transcoding. It is no coincidence that Qnap advertises 'Plex Media Server' on the TS-451D2 packaging; it may well be a useful business tool, but we suspect some folk suspicious of future lockdowns will be eyeing the NAS as a multimedia repository. 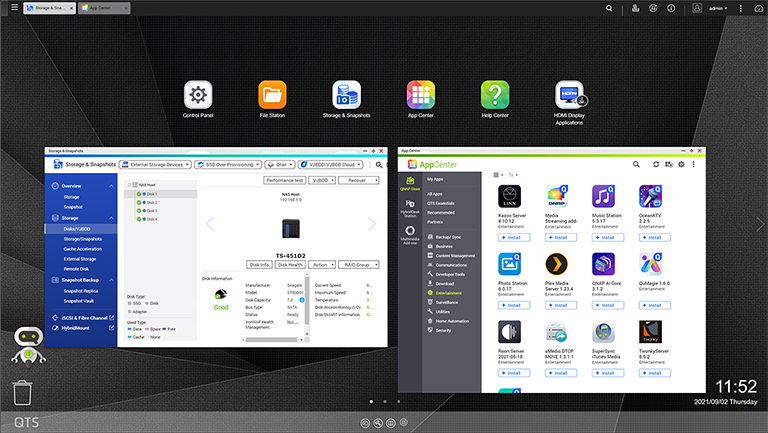 As always, the real strength of a turnkey NAS lies in its software ecosystem. Qnap's QTS operating system has evolved over the years to become one of the best in the business, and though the feature set covers everything from ext4-based snapshots to SSD caching and full-blown virtual machines, the well-presented GUI does a fine job of guiding NAS newcomers through the basics. Common tasks such as shared folders, multiple user accounts and a variety of backup options are well handled, and the list of available apps, both on the NAS itself and on mobile devices, is about as comprehensive as it gets.

Plenty to get stuck into, and QTS 5.0 is now firmly in view on the horizon. Currently in beta ahead of a final release later this year, the next-generation Qnap OS employs an updated kernel with the promise of greater security, improved performance and a refreshed interface that may well give rival Synology a run for its money. Enough of the preamble, let's now see how the TS-451D2 performs in our customary benchmarks.