Gigabyte has launched a new power supply to join its Aorus P-series modular display line-up. Joining the P750W, and P850W power supplies the new Aorus P1200W is the most powerful yet, by far, as well as being the most efficient (80-Plus Platinum rated, the others are 80-Plus gold). However, there is an even more glaring difference – as per our headline, Gigabyte has seen fit to add a large LCD panel. In the fevered minds of the Aorus designers, the concept "Welcome to the Digital Code Era," is the central reason why the display was implemented. 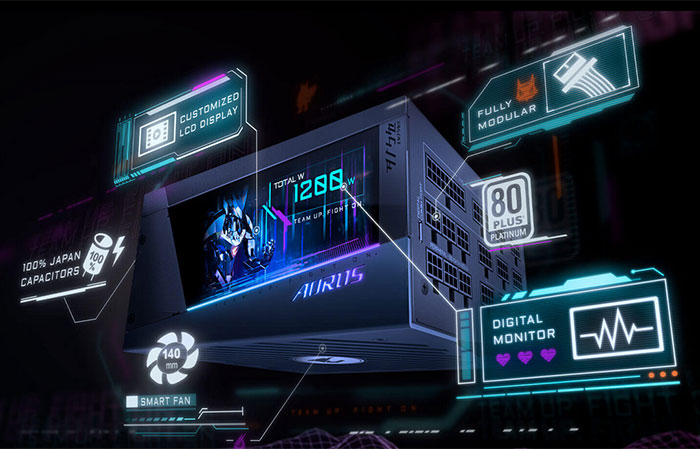 The Aorus P1200W modular PSU's display is of an unknown type and resolution. Gigabyte describes it as an 'LCD Monitor'. From the images of the product, it looks like it offers quite detailed and sharp imagery, and video playback within an asymmetric frame. Aorus has thought up five reasons you might want an LCD monitor on your PSU, as you can see in the image below. The most convincing and practical sounding reason is for digital monitoring - real-time power consumption wattage, current, temperature, fan speed and other values can be displayed.

As well as the sizable LCD monitor on one side of this 150 x 160 x 86mm ATX PSU (same compact size as the other Aorus P-series), Gigabyte would like to highlight the following attractive features:

For reference, the modular connectors available to users are shown above, alongside the PSU efficiency curve chart (click to zoom). Gigabyte says that the 140mm fan in this PSU will smartly stop in scenarios where there are loads of 240W or lower, and remain at 20dB or less up to approx 720W power draw. You can compare the Aorus P1200W modular PSU specs with its 750 and 850W brethren here.

Gigabyte has put an aRGB backlit Aorus logo in a wedge section below the display. This can be customised with the RGB Fusion 2.0 software for lighting / sync effects. It doesn't say so, but the same software is probably where you will set up the display content, whether it be real-time monitor data, an image, GIF animation loop, or video.

At the time of writing, I don't have pricing or availability details for the new Aorus P1200W modular PSU with LCD panel.

Most cases now shroud your PSU off, so is this just a fun gimmick or actual use (barring enthusiast overclockers whom are using their system on an open bench!), we dunno!
Posted by QuorTek - Mon 02 Aug 2021 12:33
They are covering a need there is none for… I don't get what use of it.
Posted by Saracen999 - Mon 02 Aug 2021 12:36
My first reaction is perfectly covered by the first two replies in here, especially :rolleyes: which is delightfully succinct. So here's the long version.

My second reaction was, well, next time I see someone with their head stuck inside a PC case for an undue length of time, and sweating profuely, I'm going to wonder exactly what they're watching …. on their PSU.

My fourth reaction was not just an LCD monitor but also

Gigabyte has put an aRGB backlit Aorus logo in a wedge section below the display.

An LCD monitor and RGB? That's just getting greedy. And showing off. And no wonder it's 1200w if it has to drive all the fancy gizmo's.

My next reaction was the bit in the review that mentioned pricing was not yet available. I bet it wasn't. ;)

My overall conclusion was, well, as this is a 1200w PSU it's aimed at a pretty small target marget anyway. How many PCs, even with extremely muscular graphics cards actually need 1200w. It's a niche market, IMHO, to say the least. But if someone wants all that, and has more money than sense, why not? It's not like we're facing a global environmental crisis, a threat of global warming, imminent power shortages and all frantically being encouraged to try to switch everything to lower power consumption devices, from electric cars to LED light bulbs, is it?

Oh …. wait ….
Posted by ilh - Mon 02 Aug 2021 12:52
“In the fevered minds of the Aorus designers, the concept ”Welcome to the Digital Code Era,“ is the central reason why the display was implemented.”
Pretty sure we've been in the “digital code era” for a good few decades, not sure that's a good reason for implementing something so pointless. That being said, I'm looking forward to someone getting Doom up and running on it and playing it through changing energy requirements of the PSU by putting it under different loads.