On Friday, VideoCardz shared a batch of AMD Radeon RX 6600 non-XT graphics cards images from its sources. The images are crisp and detailed, and the GPU centric leaks site has a nice comparison slider showing easy to spot differences between the PCB layout and heatsink - from top-down views of the respective add-in-cards.

The exact tech specs of the Radeon RX 6600 are not yet known, or firmed up by any substantial leak. However, rumours are that compared to the RX 6600XT it will have 1792 cores, vs 2048 cores. Other than that, most of the specs look like they will be the same, apart from the power saving from running fewer GPU cores. The cutbacks are likely to mean that the competitive position against the Nvidia's GeForce RTX 3060 is weakened enough for it to lose out to the rival on average.

On Saturday, a pair of PC hardware retailers in Australia published online listings with pricing for this new Gigabyte Eagle (GV-R66EAGLE-8GD). The prices given were AUD$805, and $910. The first listing might not include Australia's Goods and Service Tax (GST). Converting AUD$900 to GBP today would get you about GBP£480 before any fees. One of the Australian retailers also stocks the Gigabyte Radeon RX 6600 XT Eagle, for which it is asking AUD$300 more (inc tax). 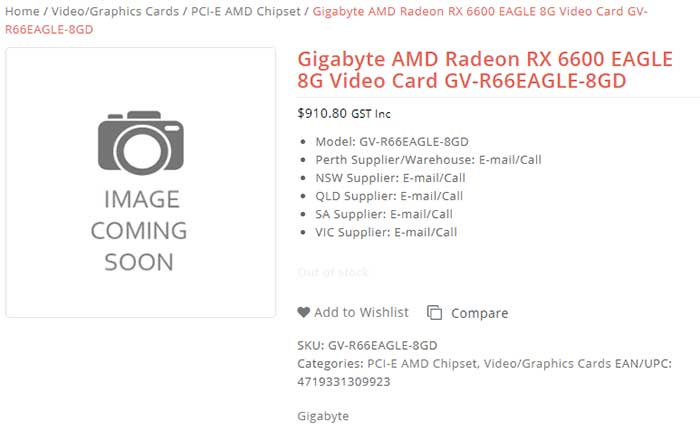 The nature of the above leaks suggests that the official launch of the AMD Radeon RX 6600 can't be that far away. According to Coreteks in July, the XT-less RX 6600 is going to become available in October. The established leaker recently added that he expects the non-XT variant to be available in much smaller quantities than the XT, as "AMD is getting great yields with [TSMC] N7, so it doesn't make sense to sell non-XTs when people will buy XTs if they're out there".

On Sunday, news of the first collaborative efforts to be realized by the Samsung and AMD partnership was shared on a tech forum in Korea. The story goes that Samsung has prepared a number of SoCs to address its mid-range, high-end, and flagship devices.

Samsung is going to debut the first Exynos / mRDNA SoCs in its midrange-premium Galaxy A-series smartphones, says the source. Some Chinese smartphone firms are also on board with launching devices based on this SoC.

Looking at rumoured configurations, the SoC is going to mix Arm Cortex-A78 big cores with various amounts of AMD mRDNA CUs, depending on the market segment. Some Galaxy A-series mobiles will get SoCs with two or four mRDNA CUs, and there will be an SoC for Galaxy S devices with six CUs, says the source. GPU clocks in testing are currently running at up to 1GHz. For some perspective, the Valve Steam Deck uses eight RDNA2 CUs running at 1-1.6GHz.

The above news nuggets are interesting, but require a pinch of salt or two, as always. Even if true at the time of writing, configurations can change.

Posted by cptwhite_uk - Mon 06 Sep 2021 12:45
Are we looking at a situation where the latest hardware is effectively bought in bulk by miners and we're going to have to suffice with last gen, ex-mining hardware (for reasonable cost/performance), for the forseeable future? It'll be interesting to see what happens in the GPU used market space when the next generation of GPU's launch - will miners switch as soon as possible and discard their previous cards on the used market - surely we will reach an equalibrium where the demand for mining cards will tail off? I've been a PC gamer for 24 years, and was lucky enough to get a 3060Ti on launch day for £369. I could afford £1000 for a GPU if I wanted, but I'm just not willing to pay these kinds of prices. Surely we're going to reach a point where it's affecting game sales, as the majority are put off PC gaming by the extortionate costs to maintain a viable modern gaming PC?

Where does this all leave the gaming PC community? Playing 2nd fiddle to the Mining community, and having to rely on their cast offs and scraps, with limited amounts of current gen hardware for the lucky few enthusiasts? I'm not sure I see the solution, is there any impetus for manufacturers to even increase production when they can just keep making double (or more) the profit per card at current supply levels?

The whole supply / demand chain seems broken for the last year, and the situation doesn't look like it's going to change anytime soon.
Posted by CAT-THE-FIFTH - Mon 06 Sep 2021 12:55
Its already listed in Australia at the equivalent of over 600USD!! Considering other PC components are nowhere near as badly affected,it makes me wonder whether we will see the EU,etc stepping in and fining Nvidia/AMD in a few years. This all smacks of the times when RAM,HDDs,etc went up to silly levels in pricing,and there was apparently certain Gentlemen's agreements in place! ;)
Posted by DanceswithUnix - Mon 06 Sep 2021 13:28

cptwhite_uk
The whole supply / demand chain seems broken for the last year, and the situation doesn't look like it's going to change anytime soon.

Right now it looks like the Ethereum difficulty bomb is set to create the Ethereum Ice Age (jeeze these people are bad at language) in December. At that point, by design, Ethereum should be very unprofitable to mine.

A lot of people have said things like “I shall just switch to Ravencoin”, but those people are apparently not that good at maths. The act of everyone switching to alt coins will tank their profitability.

cptwhite_uk
Someone asked when prices will return to MRRP a few months back and I randomly said March 2022, only half joking. At this point it's possible I was right, or even too optimistic.

That's a tricky one, but you could well be about right!

Nvidia will be watching the Eth2.0 transition very carefully, knowing that around Christmas there will likely be a flood of used GPUs hitting the market and a sudden drop in demand. I wouldn't be surprised if they slowed down production to avoid having unsold cards lying around.

Mind you, I thought that the London fork of Ethereum would tank mining, but the value of Eth has risen to the point it is really very profitable to mine still.