In March we saw monitor specialist AOC move into the gaming headsets market with an affordable pair of wired devices, the GH200 and GH300. Now it is expanding its PC gaming friendly accessories range with the addition of mice, mouse mats, and keyboards.

There are basically three keyboards models but as AOC offers buyers switch choices with its mechanical keyboards there are five keyboards listed on its product pages, as follows: 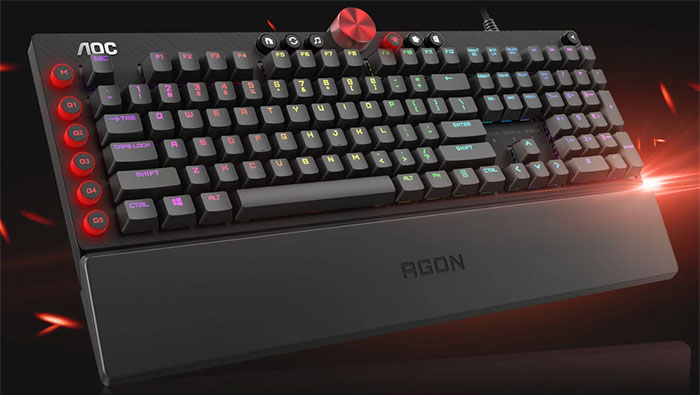 AOC GK500 with Outemu Blue or Red switches. $49.99
This is a simpler offering, with the cheaper Outemu brand mechanical keyswitches. It keeps the premium metal alloy top cover, 100 per cent anti-ghosting and N-Key rollover, 1,000Hz polling, and per-key RGB LED lighting. However, the wrist rest isn't 'leather', and you won't find a USB pass-through, or the range of dedicated macro and media keys with volume wheel. AOC's GK500 measures 433 x 192 x 37mm, and weighs in at 1,050g.

AOC GK200 keyboard. €42.20
This entry level gaming keyboard is described as offering a 'mechanical feel' thanks to 'tactile sliders' in place of the usual rubber dome membrane. The GK200 looks the part in the images, but the specs reveal you have a 25 key rollover here, which should be more than enough, with 25 yet anti-ghosting too. Meanwhile, it covers the essential gamer preference of 1000Hz polling, and metallic top cover, and RGB lighting (though this isn't per key backlighting, rather rainbow zoned lighting). A detachable magnetic wrist rest is included and the GK200 measures 461 x 168 x 53mm and weighs 808g. 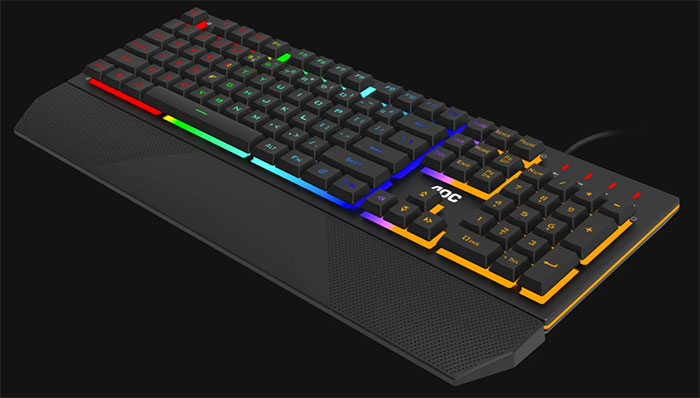 You will find a similar split to the above in the new gaming mice on offer from AOC, like they designed appropriate partners for the above. At the top end you have the AOC Agon AGM700 with the Pixart PWM3389 sensor, 8 programmable buttons and customisable lighting – priced at $39.99. Moving down a notch there is the GM500 with Pixart PWM3325 sensor, but which also boasts 8 buttons and 16.7m colour lighting – priced at $24.99. Meanwhile, the GM200 offers a Pixart PWM3519 sensor, with 6 buttons, more basic lighting options, and a shorter click lifespan rating of 10 million L/R clicks (compared to 50 million) – priced at €20. 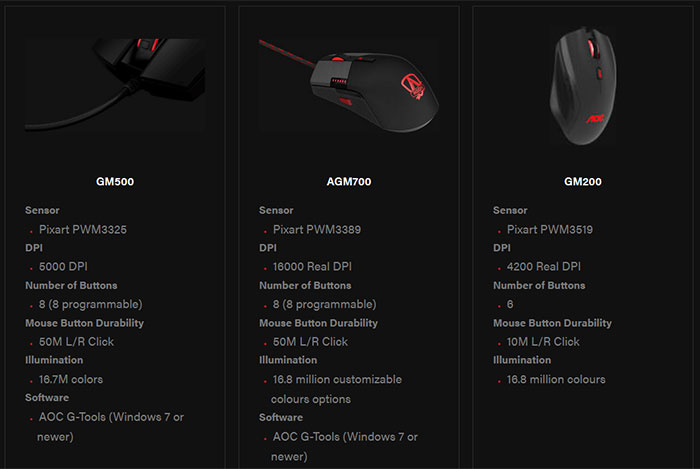 Last but not least the AOC gaming accessories range includes both a single and dual monitor arm with gas spring mechanism, designed to support 75x75mm VESA mount monitors up to 9kg.