Microsoft is looking closely at a big change in the design of its upcoming Surface computers. A newly unearthed patent application, spotted by Paul Thurrott, indicates that the firm is considering adding an inking input area onto the wrist rest of its Surface Book hybrid.

In the illustrations within the patent document you can see that one possible design features a 'writing surface' situated to the right, and of a similar size to, the touch pad. The sketch shows that what the user inks on this part of the 'writing input device' shows up verbatim on screen. 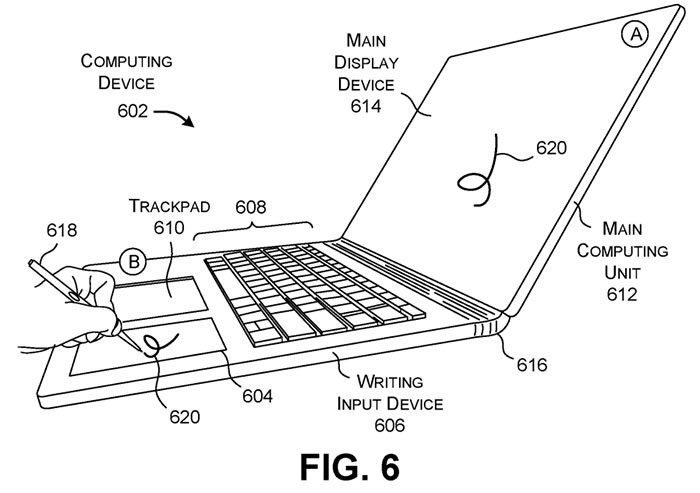 Though all Surface devices feature touch screens, and users can choose to ink via the screen using touch or stylus, it is noted that in traditional clamshell usage mode such a reach is unnatural: "A user may interact with the writing input device in a manner similar to a physical pad of paper," via the new stylus input pad, the patent application explains. "This capability improves the user's note-taking experience by not requiring the user to assume an unnatural posture while taking notes."

Reading the patent further, a "triggering event" will be used to transfer the captured digital ink from the writing input device to the main screen of the device. One might expect an 'enter' symbol on the e-ink input display to confirm a signature or other inking scrawl is acceptable for placing in the main screen document.

Elsewhere in the patent there is an optional stylus silo / receptacle / housing touted. Currently the Surface Pro X includes such a design feature as part of its Type Covers but other Surface PCs currently lack this handy design finesse.

Would current Surface users welcome the above innovations? Please let us know in the comments below.

Posted by EvilCycle - Tue 10 Dec 2019 11:53
Since tablets came along I have no idea why this hasn't already been a thing for years, mobile professionals that sketch drawings a lot but can't replace a laptop with a tablet for whatever reason (software, keyboard layout etc.) would be all over this I would think.
Posted by [GSV]Trig - Tue 10 Dec 2019 13:13
Given the area is pretty much wasted bar where the trackpad is I don't get why the entire area isn't being used for touch or something, image if the entire palm area was configurable to either all be touch, or you could move it from left to right in the software and configure what parts of it were touch, or write or dead spots etc
Posted by Scryder - Tue 10 Dec 2019 13:21
Hasn't PDA's been around since the 90's? So is this really an innovation or rehashing of old ideas?

Also, I got this a while back for my daughter to play with: LCD Writing Tablet … the only thing missing was a connection to the computer. I assume as these are now relatively cheap, the cost for MS to add this is now feasible, probably not in the past.
Posted by Zhaoman - Tue 10 Dec 2019 14:25
Yeah it defo looks like a good idea. Maybe just make the trackpad bigger and make it a combined touch/writing input, that seems pretty logical to me and would provide a bit of best of both worlds for compatible laptops.
Posted by duc - Tue 10 Dec 2019 18:07
Something like an IBM ThinkPad TransNote….maybe