HP has emailed HEXUS about a range of new gaming products which will fill the ranks of its Omen and Pavilion lines. Unveiled at the HP Gaming Festival in Beijing today were several new gaming laptops, a number of gaming peripherals, and even a new gaming chair. Nicely, all the newly announced gaming products will be arriving in the UK through July and August and I have shared pricing and release dates at the foot of this article. 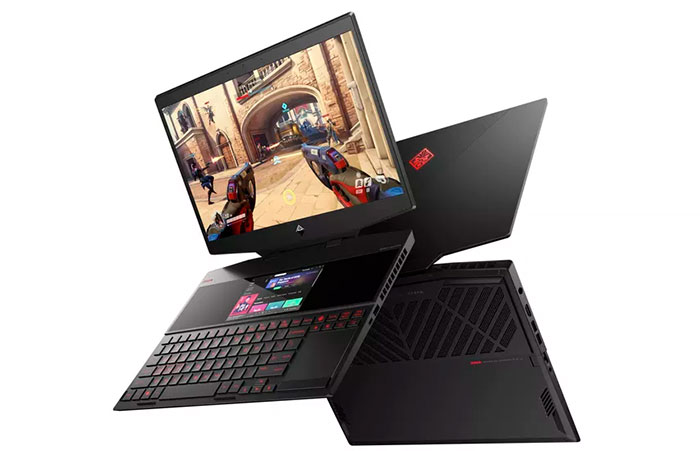 Put your phone down

The highlight of the HP unveilings in China was definitely the HP Omen X 2S, which is claimed to be the "world's first dual-screen gaming laptop". Its central proposition is that a second screen embedded above the keyboard deck "shakes the foundation of what's expected of a gaming laptop, with tremendous multi-tasking capabilities for various activities and support with dedicated hotkeys".

We are told that 82 per cent of PC gamers use their mobile phones for messaging during gaming sessions, 61 per cent listen to music, and 49 per cent watch game related live streams, video content and browse website. The second screen in the HP Omen X 2S is meant to rationalise all this activity and bring the focus back to your gaming PC. The six-inch touchscreen situated above the keyboard desk lets players "message friends in WeChat and WhatsApp, browse in Spotify, watch Twitch and YouTube, or even serve as a hub for Omen Command Centre software," without interrupting the on-screen action. 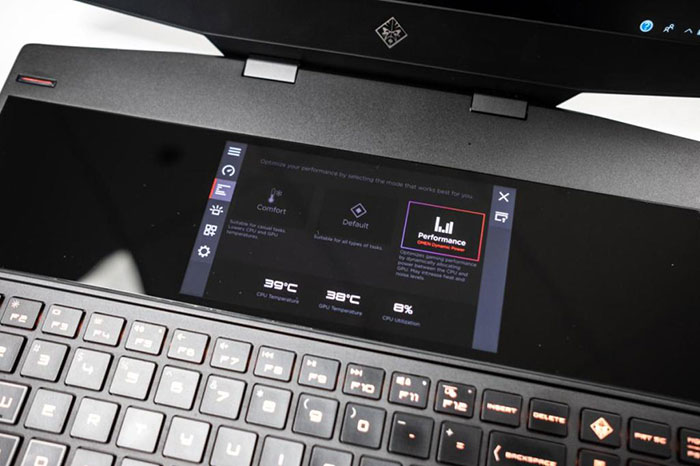 In addition to the functionality outlined above, HP has integrated a real-time screen mirroring feature that can cut and magnify parts of the main screen – including copying the map portion of a racing game – to the second screen.

Moving on to the more usual laptop specifications, the main screen in the HP Omen X 2S is 15.6-inches in diagonal and can be configured at purchase as a 1080p display with 144Hz or 240Hz max refresh, or you can swap it out for a 4K HDR 400 60Hz panel. Inside you can choose from Intel 9th Gen Core processors up to an octa-core Core i9, and up to Nvidia GeForce RTX 2080 Max-Q graphics.

The new HP Omen X 2S is just 20mm thick and to help it cope with the thermal load HP has decided to apply liquid metal compound to the thermal system. Specifically it is using Thermal Grizzly Conductonaut. In its own test, HP says that the liquid metal compound provided up to a 28 per cent frames-per-second (FPS) performance boost over traditional grease when testing in Apex Legends, and an 8.5 per cent faster lead time in a Blender Benchmark test. These tests took place on a system with Intel i7-9750H, 16GB DDR4-2666, and RTX2070 Max-Q. 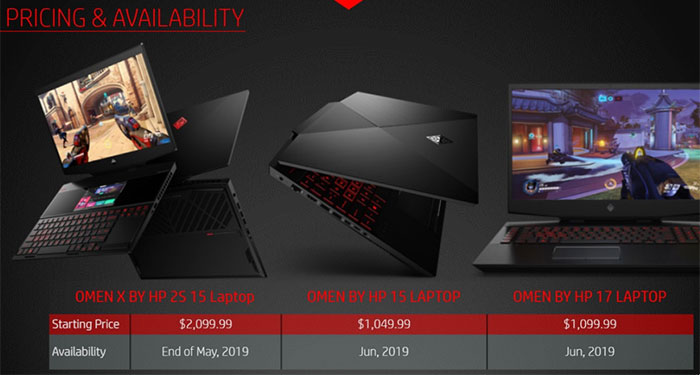 HP updated its Omen 15 and Omen 17 laptops with the 9th Intel H-series CPUs and up to Nvidia GeForce RTX 2080 Max-Q and RTX 2080 respectively. These will also come with fast screen options up to 240Hz. Whichever new Omen you choose (including the HP Omen X 2S) HP has implemented a new cooling system dubbed Omen Tempest. It uses a 12V fan and thre sided venting. All the new Omen gaming laptops feature new Intel Wi-Fi 6 (802.11ax) designed to support gigabit speeds.

Fleshing out the HP Omen product offerings was a new Omen Photon Wireless Mouse with 11 buttons, the Omen Outpost RGB Mousepad with wireless charging for mice and phones, and the Omen Citadel Gaming Chair.

Omen and Pavilion by HP Pricing and Availability

Posted by mtyson - Tue 14 May 2019 13:19
Here's a hands-on video from PC World, providing a good overview before any reviews become available.

https://www.youtube.com/watch?v=lvNKG5mc_iQ
Posted by globalwarning - Tue 14 May 2019 14:34
Interesting design for the dual screen, but I feel like it's probably just as easy to just use your phone. Also, what's going on with the black on either side of the screen, and a 1440 @120 or 144 Hz screen seems like it would make more sense than trying to drive a 4K @60, except maybe for content creation and editing.
Posted by Ttaskmaster - Tue 14 May 2019 14:45

HEXUS
“shakes the foundation of what's expected of a gaming laptop, with tremendous multi-tasking capabilities for various activities and support with dedicated hotkeys”

This ain't gonna change diddley-flippin'-squat, matey-boys…… This is the Logitech G19 all over again.
All that's gonna happen is that someone (like me) will buy your double-screen thingy, a couple of games/apps will support it as a novelty, and then no beggar on Earth will go near it apart from a couple of Elite Dangerous players, and one or two diehards who feel the desperate need to justify the amount of time and money they put into buying and learning the SDK.

And yes, I can already do some/most of what this thing does, on my nine-year-old keyboard screen… About the only really useful feature is the customisable display G19 applet in HWMon.
Posted by Platinum - Tue 14 May 2019 14:48
Didn't Razer do one years back with a screen / touchpad combo?
Posted by Troopa - Tue 14 May 2019 20:16
wow, a larger vent.