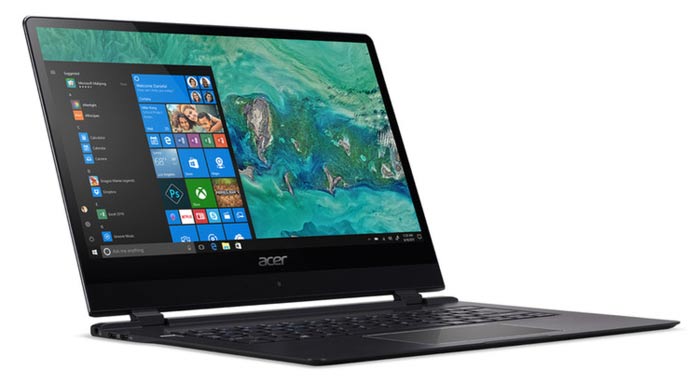 The new Acer Swift 7 is built for easy portability. Being supremely slim helps this 14-inch laptop in that aim, measuring just 8.98 thick, and being fairly light at 1.13kg. Other contributors to portability have been addressed; there is built-in Intel XMM 4G LTE connectivity with nano SIM slot, and up to 10 hours of battery life is useful when you are on the road. Acer describes the Swift 7 as “the perfect PC for those who have things to do and create anywhere, at any time”.

Acer’s press release says the new Swift 7 is powered by a 7th gen Intel Core i7 processor. We aren’t sure why it hasn’t been upgraded to an 8th gen model like the simultaneously launched Acer Spin 3. Meanwhle the processor is supported by 8GB of LPDDR3 memory, and the 256GB of PCIe SSD storage is “plenty” according to Acer. 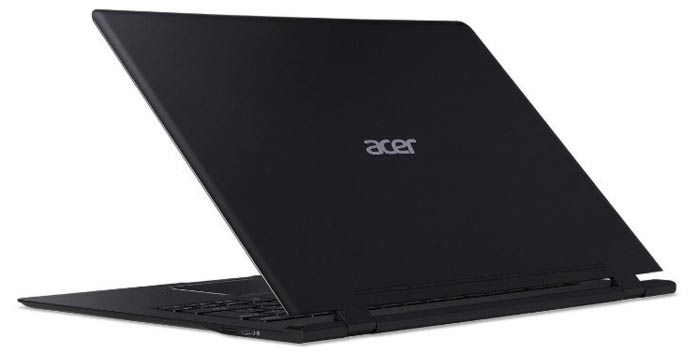 Other notable features of this super-slim laptop include; a fingerprint reader for Windows Hello, a 14-inch Full HD IPS display, an aluminium unibody chassis, a Corning Gorilla Glass NBT touchscreen and touchpad, a backlit keyboard, 802.11ac wireless with 2x2 MIMO, and the aforementioned LTE connectivity. On the topic of 4G LTE, Acer says that as well as the nano SIM slot users can enjoy eSIM technology allowing download and activation of eSIM profiles. It says that the Swift 7 “ships with a Transatel profile provisioned with up to 1GB of free data valid for one month in 48 countries”. That’s not a lot but good for plan B if you don’t have an international data SIM ready before you travel. 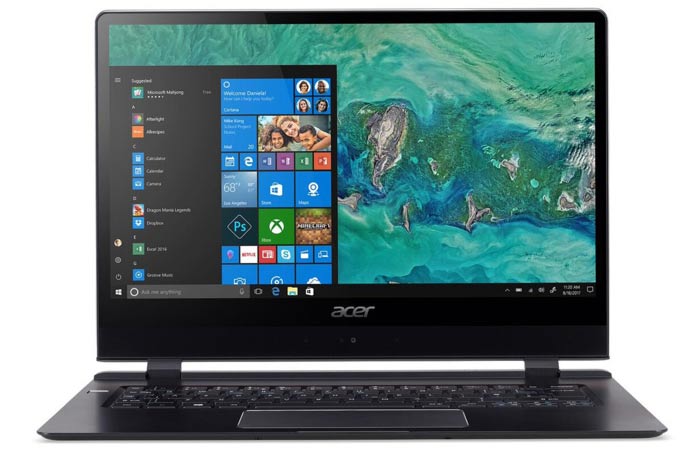 Acer’s press release says the new Swift 7 is powered by a 7th gen Intel Core i7 processor. We aren’t sure why it hasn’t been upgraded to an 8th gen model like the simultaneously launched Acer Spin 3.

https://ark.intel.com/products/95441/Intel-Core-i7-7Y75-Processor-4M-Cache-up-to-3_60-GHz
Posted by Luke7 - Mon 08 Jan 2018 18:12
“thin” and “portable” should not be confused. I'd argue this is less portable than a thicker same-spec competitor product. Why? Well, being this thin it is much more likely to be damaged while its being moved about… I'd constantly be even more worried about knocking it or crushing it getting on and off of trains etc. Portable = No. Thin = Yes.
Posted by ByteMyAscii - Mon 08 Jan 2018 18:54
This pushing for thinner and thinner just forces compromises.
When it costs more, and has lesser specs for no reason than the aesthetics, then that isn't a better product.