Just over a week ago HEXUS reported on Galax being one of the first Nvidia partners to officially update its GeForce RTX30 product stack with revised GPUs that featured Nvidia's reworked crypto-perf-nerf technology. It seems that the GPUs on which these new products are based are going to be widely referred to as LHR (Lite Hash Rate) GPUs.

Yesterday Twitter hardware watcher momomo-us spotted that Gigabyte / Aorus had updated its GeForce RTX 3060 product pages with five Rev 2.0 graphics cards, all of them featuring LHR GPUs. There is some hope that with the full GeForce RTX 30 series being updated to LHR more will stay on shelves to be bought by gamers, but we will see the fuller results of this strategy in the coming weeks / months. 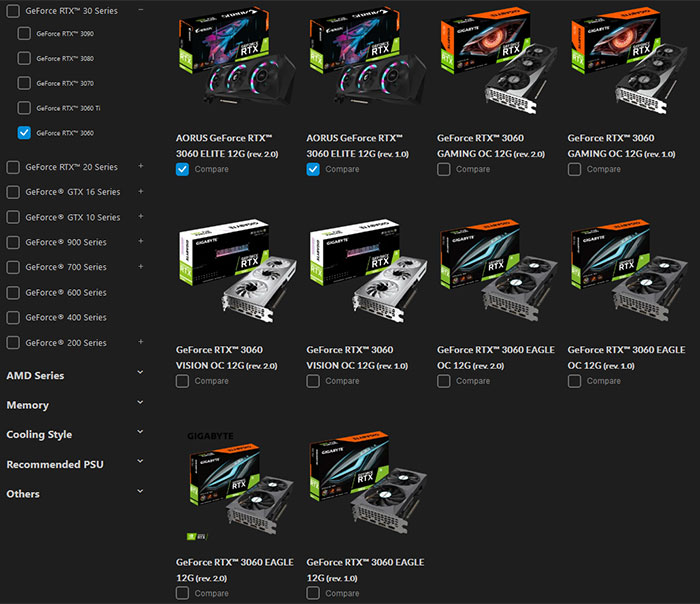 Nvidia's previous attempts at limiting ETH mining hash rates with the freshly launched GeForce RTX 3060 12GB back in February famously fell apart after a dev driver allowed users to bypass the limiter. Things went bad to worse when the use of multiple RTX 3060s in 'mining rigs' was found to be simple to achieve, by simply plugging dummy HDMI dongles into the cards that weren't connected to a display. 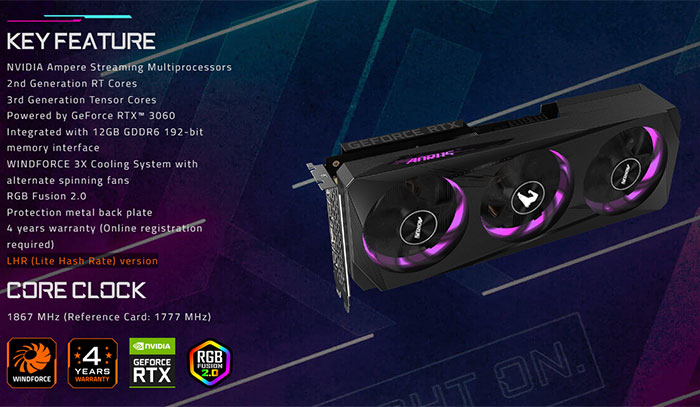 We have no detailed information about how this new LHR implementation works. One must hope that Nvidia has learnt lessons from its failure, if high-tech companies repeat silly mistakes it is particularly disappointing.

You can find all the new GeForce RTX 3060 Rev 2.0 products listed here. Filter to show only RTX 3060 and you will see 10 products, with the LHR and older version cards on one page, all together. Comparing the Aorus GeForce RTX 3060 Elite 12G Rev 2.0 and Rev 1.0, for example, reveals no spec differences at all. You will find the reference to the LHR GPU only on each product's feature page, as you can see highlighted in the screenshot above.

Now it only looks like a question of when, not if, all the GeForce RTX 30 series from all AIBs will be LHR GPU packing products as standard.

Posted by excalibur1814 - Tue 18 May 2021 12:06
It doesn't matter. People know that there's a shortage, so a select group will buy ALL of these cards and throw them onto eBay to make a profit. Greed is greed.
Posted by Corky34 - Tue 18 May 2021 12:11
While it's good to see something being done doesn't limiting the hash rate simply move the time to break even/profit window, for example instead of a GPU taking 6 months to pay for itself it will now take 12.
Posted by [GSV]Trig - Tue 18 May 2021 12:42
Still disagree with LHR, what about gamers like me that offset the cost of the card and mine when they aren't gaming, having 1 GPU in your system shouldn't trigger a slowdown, if the card detects more of its ilk in a system then its fair to assume its a mining rig and hash rate is reduced, but to blanket reduce hash rate on cards, and in some cases without anything being shown in the documentation or on the box, is just wrong IMHO…
Posted by Usernamist - Tue 18 May 2021 12:50
in what universe does LHR “keep 3060s on shelves”? Looks like Hexus has been ordered to write that
Posted by kalniel - Tue 18 May 2021 12:55

Usernamist
in what universe does LHR “keep 3060s on shelves”? Looks like Hexus has been ordered to write that

Hexus say there is some hope it will keep 3060s on shelves, but we will see. Which sounds completely accurate - many of us do indeed hope it has a positive effect on availability, and we will see :)