You are here:
Network Press-Releases 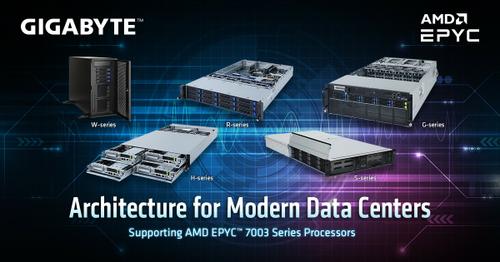 New Servers for AMD EPYC 7003 Series Processors
The general-purpose R Series has added 13 models that address the need for either one or two-socket servers, including new models that support U.2 and 3.5” drives: R162-ZA1, R262-ZA1 and R262-ZA2. In addition to updating two servers to support 3rd Gen EPYC processors, the H Series has created three new models, H282-ZC0, H282-ZC1, and H282-Z60; which all incorporate front loading nodes to deliver eight CPU sockets in a 2U chassis. The G Series has further expanded its coverage to update all servers to support AMD EPYC 7003, including all G482 servers that support up to 10 GPUs. Rounding out the update are a workstation server, two storage servers, an OCP server, and five server motherboards. All servers and server motherboards listed on the table below support 3rd Gen AMD EPYC processors.

Learn more about our servers: https://www.gigabyte.com/Enterprise
For further enquiries or assistance, email us directly: server.grp@gigabyte.com
Follow GIGABYTE on Twitter: http://twitter.com/GIGABYTEServer
Follow GIGABYTE on Facebook: https://www.facebook.com/gigabyteserver
AMD, the AMD logo, and other AMD marks are trademarks of Advanced Micro Devices (AMD) or its subsidiaries.