Apple has announced what it calls its most advanced iPad Pro ever. Packing the A12Z Bionic chip, Apple says the new premium tablet is faster than most PC laptops sold today. Some interesting new features have been delivered to Apple's premium tablet too; Ultra Wide camera, studio-quality mics, and a LiDAR Scanner. Moving on to essential accessories, the new Magic Keyboard cover offers a floating design with angle adjustment, backlit keys and a trackpad which is supported on iPads via iPadOS 13.4. 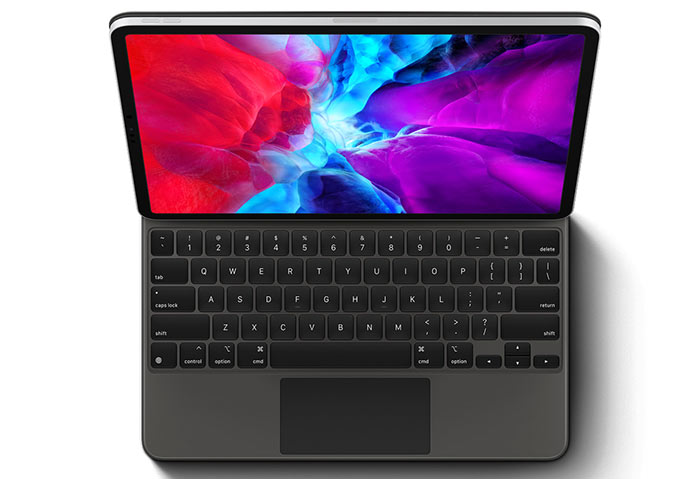 Phil Schiller, Apple's SVP of Worldwide Marketing, was typically bullish about the capabilities and prospects of the new iPad Pro, summing the new product up as "another huge leap forward for iPad". However, other than the faster processor, is there much that is truly worthwhile among all the added features announced yesterday?

The Apple iPhone flagships transitioned from using the A12 to A13 Bionic processors when refreshed last September. However, the iPads are somewhat out of step with their smaller siblings and utilise different SoCs. The previous iPad Pros utilised an octa-core A12X Bionic, but we don't have many details of this new octa-core A12Z Bionic. One thing that is documented is that the new SoC has an eight-cluster GPU, compared to the seven-cluster design previously. Furthermore, it includes tuned performance controllers and an enhanced thermal architecture, which could allow for higher base/boost clocks.

There appears to be no change in the screens used. The Space Grey or Silver finished models are available with either a 11-inch 2388 x 1668 pixel or a 12.9-inch 2732 x 2048 pixel Liquid Retina display with a ProMotion refresh rate adjustment up to 120Hz , and 600 nits peak brightness.

The imaging capabilities of the new iPad Pros are strong. First of all there is a rear Pro Camera array which offers a 12MP Wide camera for capturing photos and 4K video, and a new 10MP Ultra Wide camera that zooms out two times to capture a much wider field of view. Added to this Apple has included a LiDAR scanner which can measure the distance of objects up to 5m away. Data from this camera can be used for AR placement, improved motion capture and people occlusion purposes. Of course the new hardware makes the existing Measure app faster and more accurate, while the measure app includes a new ruler view. 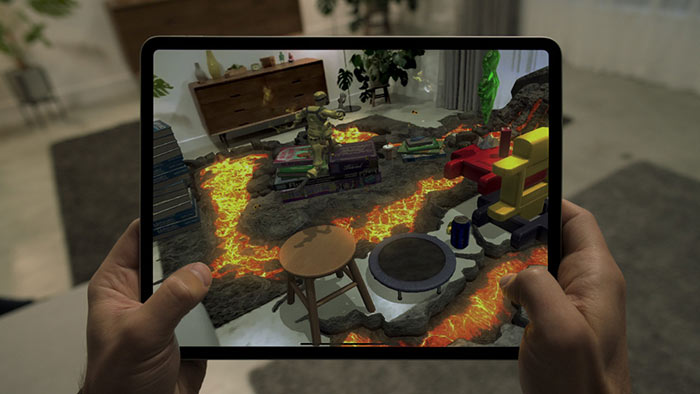 If you are capturing or streaming video via the iPad Pro you might welcome the inclusion of five "studio-quality microphones for capturing super clean audio and the quietest details". The iPad Pro can thus be the good basis of a mobile studio for creatives, reckons Apple. 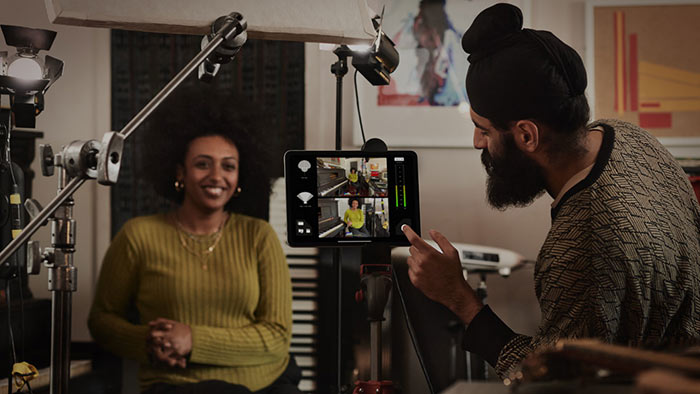 Trackpad support comes to the iPad for the first time with Apple iPadOS 13.4. If you are already using a keyboard accessory Apple has now decided it is more natural to be able to make use of a trackpad while you do so. Apple boasts of its trackpad implementation and that it enables fluid gestures for app switching, and greater productivity. On the topic of productivity, Apple will be updating the iWork suite of productivity apps to make best use of trackpads.

A first party accessory to make use of the new trackpad awareness of iPadOS is the Magic Keyboard for iPad. Apple says this accessory uses a floating design and can work well on your lap or a desk. The hinge allows for smooth viewing angle adjustment to 130 degrees. Reliable scissor keys with 1mm travel populate the keyboard deck. The keyboard is backlit and features USB-C pass-through charging.

Apple's iPadOS 13.5 will be available as a free update from 24th March for all iPad Pro models, the iPad Air 2 and later, iPad 5th generation and later, and iPad mini 4 and later.

Also, is the keyboard totally flat against the surface it's on? No potential for angling or a wrist rest by the looks of things? For £300 and for something that's the price of a desktop replacement, I'd really expect a more functional looking keyboard. It looks nice and I'm sure it's fine for the odd thing but prolonged typing requires a set of important ergonomic considerations, none of which appear present here. The screen appears to be angle adjusted, not the keyboard.

1mm travel is an acceptable trade off for a laptop but that stand does not look like it's designed to travel, but serve as the base station and then you take the tablet off it as required.

Gonna guess Apple won't be happy if you get a proper keyboard and mouse and a third party stand that does the job better for half the money, right?
Posted by CAT-THE-FIFTH - Thu 19 Mar 2020 14:02
£299 for a membrane keyboard.

CAT-THE-FIFTH
£299 for a membrane keyboard.