Apple has launched four new iPhone 13 models, which offer what most would describe as incremental updates – the faster new A15 SoC, improved battery life, and a brighter display, and you can buy them in new colours. Minimum storage was increased too, with the lowliest iPhone models now coming with at least 128GB of built-in storage (max 500GB). The Cupertino firm's biggest highlight to share with the new smartphones was its "breakthrough camera innovations," of which the most lauded was the delivery of Cinematic Mode to video recordings – like a Portrait mode for video.

Apple has four iPhone 13 models which are the iPhone 13, iPhone 13 Mini, iPhone 13 Pro and iPhone 13 Pro Max. Considering their design, they follow closely in the flat edged footsteps of the iPhone 12 models, but deliver 20 per cent smaller Face ID notches. Nowadays, Apple presents iPhone specs by fancy infographics, so I have embedded those below for you to peruse and compare.

All the new iPhones are capable of leveraging the new Cinematic mode. The feature allows for the adjustment of subject focus post-capture. The way it works, and the effects, look impressive, but it will be most interesting to see if it leads to people taking more videos than photos, for example. At first glance, it seems to be a bit of a specialist / niche appeal feature.

Looking closer at the new Apple A15 SoC, it was interesting to read the SemiAnalysis report on Apple's latest smartphone processor. The new A15 is a hexacore CPU (2 big, 4 little) with either 4 or 5 GPU cores depending on your device (iPhone/Pro/iPad). As a whole the SoC might be much faster and staying ahead of the competition but after pondering over the disclosed performance numbers Semi Analysis reckons its CPU performance advances have "ground to a halt". 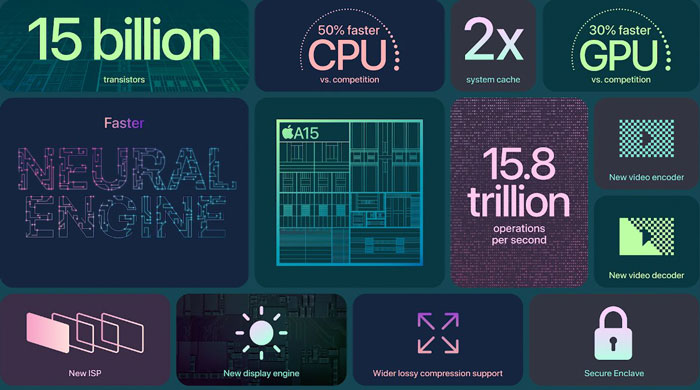 The reason behind Apple's stalling on the CPU front is said to be due to its engineers leaving for start-ups like Nuvia and Rivos. Moreover, it believes that "the next generation core was delayed out of 2021 into 2022 due to CPU engineer resource problems". This is troubling for Apple, as the competition revs up and is looking stronger than ever: Qualcomm has acquired Nuvia, Intel has brought back the geek, and every step AMD makes looks so well planned and assured.

Apple's base model iPad has been updated to a ninth generation. It now comes with the A13 Bionic processor for improved performance, as well as a TrueTone display update. Another change of note is the introduction of a 12MP front facing camera with 122 degree FOV, which works with Apple Centre Stage to keep you focussed and centre in video conferencing. Introductory pricing will remain the same as the previous gen, but with base storage doubled to 64GB.

If you prefer the portability of the iPad Mini, the newest design takes its inspiration from the latest iPad Air and iPad Pros, with flat edges all around. Apple has managed to increase the display size to 8.3- from 7.9-inches while maintaining the overall size of the device.

Other worthwhile advances of note are the TouchID moving to the power button atop of the device, and the move from Lightning port to a USB-C port. The same 12MP Centre Stage camera as with the new regular iPad is on the front. Last but not least, the new iPad Mini supports the Apple Pencil second gen, and it magnetically attaches to this tablet.

Thanks to reduced bezels, the new Apple Watch Series 7 has a 20 per cent larger display than its predecessor, without any growth in bulkiness. This size increase should boost text, and UI clarity and ease of use. It has even introduced a new full QWERTY keyboard for messaging. With this move comes a bit of controversy, as it appears that Apple removed the popular FlickType Keyboard from the App Store, then cloned it and released it as a standard feature of WatchOS 8…

Other important specs/changes with the new Apple Watch are the improved IP6X certification for dust and WR50 water resistance for swimming. Users should get battery life to last them through a busy 18-hour day, and can charge the new Watch for 8 minutes to deliver 8 hours of sleep monitoring. All existing watch bands that work with the larger Series 7 are compatible with the new model.

Posted by Friesiansam - Wed 15 Sep 2021 10:37
Nothing there to make me want to replace my iPhone 12. I'll wait and see what iPhone 16 has to offer.
Posted by SciFi - Wed 15 Sep 2021 11:17
I have to say that the excitement with which they introduce what is just expected iteration is getting a little embarrassing!

This forced release schedule that the markets have companies like Apple locked into is actually damaging their brands.. I mean it used to be exciting to see what new awesome innovation companies had but now is't just a version number and claims about % speed / battery life… yawn
Posted by Gentle Viking - Wed 15 Sep 2021 11:21
Nothing here that make me want to get a iphone.
Posted by kalniel - Wed 15 Sep 2021 11:56
Only incremental improvements, but the way other phones are going (larger, dropping 3.5 jack, expandable storage etc.) is pushing me more and more towards Apple where similar constraints are no longer unique.
Posted by Gentle Viking - Wed 15 Sep 2021 18:17
Apple would have to pay me to get one of their phones, and then i would only consider it, and probably reject it,,,,,, just like even with the biggest lotto win i would never buy a nice BMW or Audi,,,,,, at least not for a street car.¨, for track day they are probably good cars.