Head of Xbox Phil Spencer has shared an Xbox Wire blog post detailing some of the tech specs of the upcoming next generation of Xbox consoles. In an effort to be "open and transparent" with gaming enthusiasts, Spencer provides some interesting new details, and helps confirm/dispel various rumours, about the Xbox Series X. the Gestalt view of the next generation is that it will "set new standards in graphical power and processing speed," thanks to "innovative leaps in CPU, GPU and storage technology".

Of course the Xbox Series X will be Microsoft's most powerful console ever. It is claimed to offer four times the processing power of the current Xbox One. Moreover, the console's new RDNA 2 architecture GPU is claimed to deliver up to 12TFLOPS of performance - 2x that of the Xbox One X, and 8x the original Xbox One. Microsoft mentions that the CPU cores will be Zen 2 based but doesn't provide any inter-generational comparisons. Overall though, the updated APU will provide a "true generational leap in processing and graphics power," asserts Spencer. Thus games will be faster and smoother, and be able to offer larger, more sophisticated game worlds. 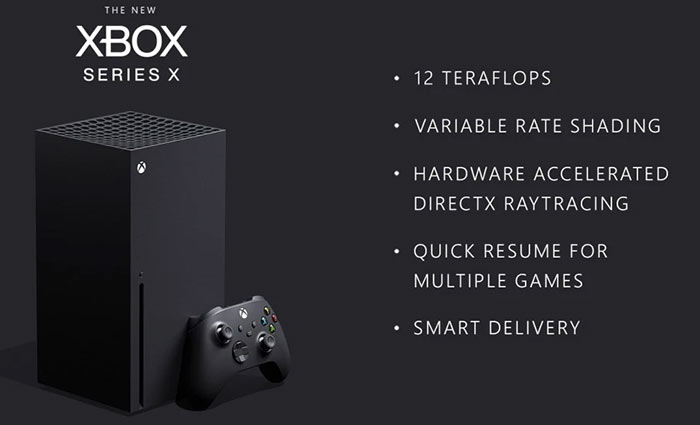 Some more interesting details about the RDNA 2 architecture are confirmed by Spencer. The GPU will support Variable Rate Shading (VRS) , and Hardware-accelerated DirectX Raytracing on the Xbox platform. The Xbox boss hints that as well as true-to-life lighting and accurate reflections, real-time raytracing power will be used for more realistic acoustics.

120fps support is coming to the Xbox Series X. Microsoft reckons developers might choose to implement this option for particularly fast-paced gaming titles.

More playing and less waiting - the Xbox Series X design should mean the fun can begin sooner, and in game fluidity and low latency will provide greater immersion. With next gen SSD storage game worlds will be able to be "larger, more dynamic and load in a flash," says Microsoft. Furthermore, a new Quick Resume feature will allow for user continuation of multiple games from a suspended state almost instantly, "returning you to where you were and what you were doing, without waiting through long loading screens."

The next gen Xbox consoles will feature HDMI 2.1 and enable some compelling gaming features on TVs from major manufacturers. Using the new interface features such as Auto Low Latency Mode (ALLM) and Variable Refresh Rate (VRR) will be available. Thanks to this tech and 120fps support Xbox gamers should be able to look forward to responsive gaming with minimal lag.

The Xbox Series X isn't all about hardware advances, and Phil Spencer outlines some software and service choices Microsoft has made. It might not be a surprise to hear that backwards compatibility will mean the new console will cover four generations of Xbox gaming. Older games will "look and play better than ever before," asserts Spencer - with steadier frame rates, faster load times and improved resolution and visual fidelity.

Xbox Smart Delivery sounds like another welcome new feature. It means that, at least for Xbox Game Studio titles like Halo Infinite, you can buy a game on one platform and when you upgrade you will get the newest version of that game for the new platform. It will be left up to third party developers and publishers whether they want to implement Smart Delivery.

More details about the Xbox Series X are promised in the coming months, as we head towards E3.

Current RTX users have a lot of untapped potential here once VRS starts getting used in PC games, I feel their investment is going to mature well which explains the price (Nvidia know once people realise the benefits of VRS, they won't be upgrading from a 20 series for a while), and for those holding off for the 30 series, they are going to be buying some killer performing cards!
Posted by QuorTek - Wed 26 Feb 2020 00:33
also they would do the same to the PS5, Nvidia may actually take a blow vs those machines as they will set the base standard for game performance and looks in general, AMD never been bad at what they do if you look around what they power up.
Posted by kalniel - Wed 26 Feb 2020 08:33

EvilCycle
VRS is going to be the game changer here, lets say AMD's 12Tflops real world game performance is roughly the same as Nvidias 10 Tflops, that puts the Xbox series X in the same ballpark of a 2080 which could handle 8K at 30fps via VRS.

Current RTX users have a lot of untapped potential here once VRS starts getting used in PC games, I feel their investment is going to mature well which explains the price (Nvidia know once people realise the benefits of VRS, they won't be upgrading from a 20 series for a while), and for those holding off for the 30 series, they are going to be buying some killer performing cards!

Why is VRS a game changer? You're going to get up to about 12% better FPS, which is not to be sneezed at, but nothing like the generational leap in performance we're seeing anyway.
Posted by EvilCycle - Wed 26 Feb 2020 08:52

kalniel
Why is VRS a game changer? You're going to get up to about 12% better FPS, which is not to be sneezed at, but nothing like the generational leap in performance we're seeing anyway.

Testing VRS under 3D Mark gave me wayyyy more than a 12% performance boost, I can't remember the actual numbers I will go back and test it soon, but it was more like a 60% boost at 4k when implemented properly.