Netflix is again looking into users who share passwords with others who might not be part of their household. We have seen indications that Netflix has been pondering over this missed potential revenue before, but the first has always stepped back from being the 'bad cop'.

Recently, GammaWire reports users in some regions have started to see warning screens regarding account sharing. The following message screen might pop up, when various logins are detected:

"If you don't live with the owner of this account, you need your own account to keep watching." 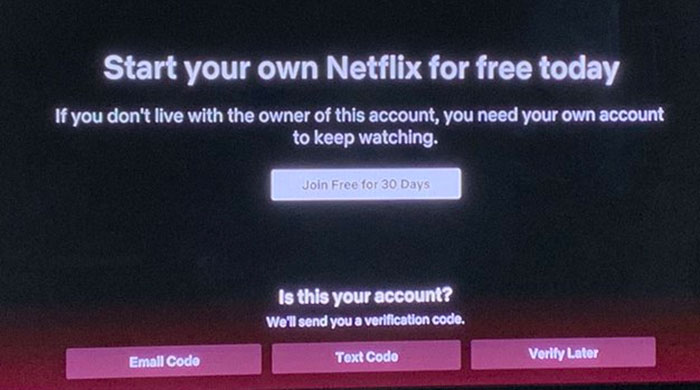 Netflix confirmed to the Hollywood Reporter that this is a message with a limited rollout which is "designed to help ensure that people using Netflix accounts are authorized to do so". It is therefore being pitched as Netflix keeping a careful eye on user accounts to keep them secure.

A quick way to dismiss the pop-up is to simply click 'Verify Later' but who knows how persistent these intrusions might become. Alternatively you can choose to get a verification code by email or SMS, which may or may not be convenient. Moreover, I'd question the next steps from Netflix should say you live in Tipperary and are sharing the account with a friend in Timbuktu.

If you have ever subscribed to Netflix you will know that there are several subscription choices to be made and, as you increase the base streaming quality – SD, FHD, UHD, typically more simultaneous users are allowed to stream. Thus, for example, someone who lives on their own but insists on UHD streaming may have three 'spare screens'. The T&Cs indicate that any others in your household can watch these other screens, but people like to bend the definition of household, and for a long time Netflix knows this has been going on.

Back in 2016, Netflix CEO Reed Hastings said that "Password sharing is something you have to learn to live with because there’s so much legitimate password sharing - like you sharing with your spouse, with your kids... so there’s no bright line, and we’re doing fine as is." Those are reassuring words, though from five years ago, and some industry watchers believe that as growth in media streaming services slows and competition tightens the likes of Netflix, HBO Max will have to reduce unauthorized access to their shows and movies. The technology to detect and block 'non-household' sharing is likely to get better too.

A recent price increase and folk being under lockdown has helped Netflix's bottom line with its latest results showing it has over 200 million paid subscribers, and it brought in $25 billion in revenue and made $2.8 billion in profit in 2020.

Posted by philehidiot - Fri 12 Mar 2021 11:23
I don't really begrudge them this. There's a grey area between reasonable sharing and taking the smeg. If they want to start nibbling at the people pushing the bounds of reasonableness, they just need to be careful they don't go full accusatory.
Posted by ik9000 - Fri 12 Mar 2021 11:41
shock horror: company asks users not to take the p.
Posted by CAT-THE-FIFTH - Fri 12 Mar 2021 11:42
It's probably because people are getting fedup of having to buy a 1000 streaming services for each show they want to watch,and then companies like Netflix nicely deciding to jack up prices at the same time. So people are being creative and probably sharing out accounts to family members,etc. I suppose the easier way is to not bother watching those shows, if you can't see the value in buying the attached streaming service.
Posted by DanceswithUnix - Fri 12 Mar 2021 12:00
With a son hoping to go to university next year, it will be interesting to see if they start enforcing this. They have been pretty lenient so far.
Posted by jimbouk - Fri 12 Mar 2021 12:09
Seen the notification and validated, not much of a pain. Pre lockdown it would have been ‘normal’ for one household member to watch when working away from home during the week for example so it's going to have to be nag rather than strict enforcement.

Real shame their stream quality and number of streams is linked - they're encouraging sharing by tiering it that way. Want HD? You now have an extra screen you'll never use. Want 4k, you now have 3. We don't all have a partner and 2.4 children…