Twitch has suffered from a massive data breach, with 125GB of code and user data uncovered and shared on the internet. Worryingly, this sizable data chunk, made available publicly as a torrent, is labelled as "part one," so there might be more sensitive info being prepared for release in the coming hours/days.

Motivation for the leak is said to be, firstly, that Twitch is a "disgusting toxic cesspool," and secondly, to "foster more disruption and competition in the online video streaming space".

Analysis of the data leaked thus far results in the following highlights:

Late on Wednesday, Twitch confirmed the data breach was genuine. In a Twitter statement, made just a couple of days after poking fun at Facebook's technical issues, the firm said that "We can confirm a breach has taken place. Our teams are working with urgency to understand the extent of this." Twitch promises to provide timely updates on its findings and the situation in general. Users of Twitch are encouraged to turn on 2FA for their security, even though, as in the bullet points above, passwords in the data dump are all thought to be encrypted. 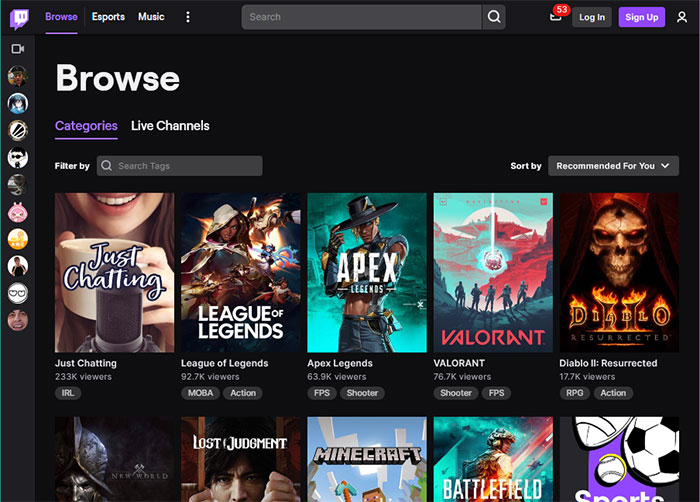 It is interesting to see Amazon is quietly planning to move into the PC games etail space, currently dominated by the likes of Steam and Epic Games Store. Its considerable reach, clout, server capacity, and experience - plus the popular Twitch video game streaming platform - should help it make a quick and resounding impact.

Much of the media seem to be most interested in the payouts Twitch makes to its top streamers. Figures in the chart below show the earnings made by the top 25 streamers since August 2019. See how many of the names you know. Many of these top earners will have considerable further income from merchandise, YouTube revenue, sponsorships, and donations.

Of all the millions of streamers on the platform, just 81 have received earnings over $1 million consolidated since August 2019.

Personally, it depends on what it is, exactly? If it has a client front-end, like Steam/Epic then not interested even as an existing Prime member, that being one of two existing subscriptions we have. The other, Virgin, we're about to dump the TV bit, andwill look at any alternative phone/broadband options.

If it's a GOG-type service where I can buy SRM-free games and not be locked in to either installing a client or online authentication, and no minimum term, then maybe, given our Prime subscription. Am I hopeful of that? Not at all. Am I holding my breath in anticipation? Hell, no. And in the words of the old catch-phrase, whether I much care …. “Bovvered? Do I look bovvered?”
Posted by cheesemp - Fri 08 Oct 2021 12:54
Its interesting as Amazon have their own Amazon games launcher so I wonder if this was planned before or after? Its pretty basic but the free games each month are ok (not Epic good though). I sort of always assumed Amazon had bigger plans.

(Saracen999 I would bet money you will be disappointed - gog is unique. It seems to give publishers a great deal of discomfort to go DRM less.)

I don't doubt it does.

Perhaps the way publishers ought/need to look at DRM-free is as a secondary, even tertiary market. Also, similar for type of user.

I have no doubt that some people like the features Steam offer, not least because it often comes up on here. Others don't like large parts of it but will grit their teeth and use it anyway because they want the games it gives access to.

Then there's those like me that don't/won't. Probably a much smaller group but, judging by GOG data, not by any means tiny.

Personally, I have no problem waiting months, or several years, for games to come out on GOG. If they never do, oh well, I can live without those games, no matter what they are. I like gaming but am nowhere near as much of a gamer as I was 15+ years ago.

What I am, though, is prepared to buy games, mostly at ‘old game’ prices but from time to time would even pay full launch price for games I really fancied …. if DRM-free. If not, so be it.

Then of course, there's those that really give publishers a problem - game pirates. There are those that, if they can get it free will do so, even compared to the heavily discounted GOG ‘offer’ prices, often less than a cup of coffee-shop coffee.

If those publishers completely avoid the likes of GOG for fear of piracy of DRM-free, I think they're missing that category, like me, that are quite happy to buy, don't/won't risk many of the dubious sources of hokey software, but aren't going to go down the Steam/Epic ‘launcher’ route either.

It's a bit like music publishers, and my age will show here, shifting copies of brand new CDs at premium prices, then a discounted tranche a year later, and eventually the supermarket quid or two bargain bin versions. That latter category might not be hugely lucrative but it is an extra slab of revenue and if they don't take it, they're missing a trick. I've bought more thana few of those - bands/albums that are ‘okay’ and worth a couple of quid but that I don't want enough to ever pay full price.

I'm genuinely not that bothered about any given game. If it comes out on GOG and the whim takes me, they'll get my money but if it doesn't come out on GOG (or similar) they'll get nothing from me.

Am I expecting anything to change? Nope.