Netflix shares have taken a tumble in afterhours trading in the wake of the publication of its second quarter earnings. As usual, the data that resulted in the significant share price action overnight was evidence of some difference between actuality and investor expectations. This time, for Netflix, it was a negative - membership growth seems to have stalled. 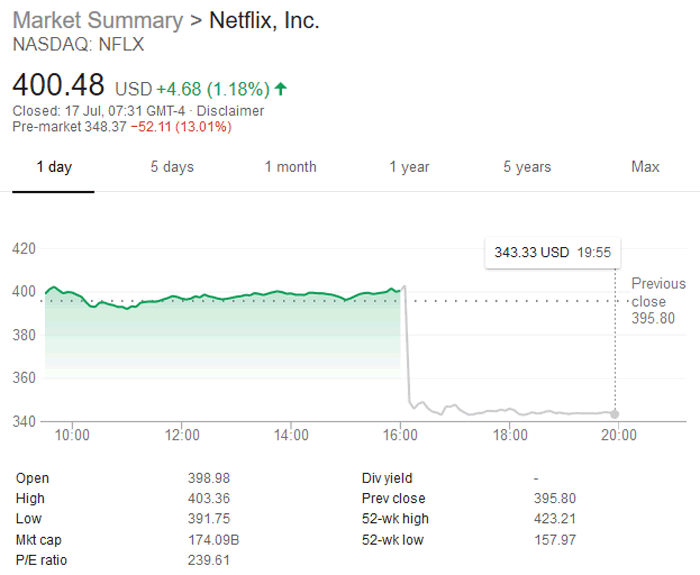 13 per cent down in after hours trading

In its trying-hard-to-be-positive letter (PDF) to shareholders, Netflix said that it had "a strong but not stellar Q2, ending with 130 million memberships". Unfortunately it had added 5.2 million new members, the same as in Q2 last year, and a significant double digit percentage lower than the expected 6.2 million new members. CNBC explains that "domestic additions were only a little more than half of its projections, while it just added 4.5 million subscribers internationally".

Bullet pointed highlights of the recent Netflix results are as follows:

There seems to be a number of things at play, most of which could have negative impacts on the progress of Netflix. First of all streaming services could be approaching saturation point for now. Secondly, there are more streaming competitors than ever and some, with plenty of resources, are pushing harder for subscribers using special offers and cross promotions (think about Apple, Google/YouTube, Sky, Amazon and others). Thirdly, it is pretty easy to chop and change streaming providers and some say the Netflix formula for content, and even its own shows, is getting stale.

One mediocre quarter doesn't set a bad trend in stone. The BBC report on this news suggests investors don't lose their heads, especially as Q2's results come in the wake of "two extremely strong quarters of comfortably beating expectations on adding subscribers." Some seasonality is probably at play here too.

Posted by shaithis - Tue 17 Jul 2018 13:12
Netflix suffers from the same issue that has plagued content providers for a while: Fragmentation of the market through greed.

These companies need to realise there is only so much money to go around and fracturing a market just makes it more expensive for us, to the point where we say enough is enough and look for alternative means of getting the content…..
Posted by aidanjt - Tue 17 Jul 2018 13:40
Perhaps more audiences have noticed how ‘woke’ Netflix has been getting as they've been growing in size. Companies tend to start haemorrhaging customers and potential customers when they go that way.
Posted by spacein_vader - Tue 17 Jul 2018 14:11

aidanjt
Perhaps more audiences have noticed how ‘woke’ Netflix has been getting as they've been growing in size. Companies tend to start haemorrhaging customers and potential customers when they go that way.

They aren't haemorrhaging customers, they're just growing more slowly. Surely the most likely reasons are that what has till now been a new market (IP TV) is becoming established and thus there are less unreached customers to convert combined with increased competition from Amazon etc.

aidanjt
Perhaps more audiences have noticed how ‘woke’ Netflix has been getting as they've been growing in size. Companies tend to start haemorrhaging customers and potential customers when they go that way.

I'm certainly not bothering with them until they go back to seeing child pr0n as not a subject for broadcast and stop being so stupid with their…. “wokeness”.
Posted by philehidiot - Tue 17 Jul 2018 14:15

spacein_vader
I've no idea what woke means in this context though.