Statistics from NetApplications data shows that only 20 out of 10,000 computers running Windows are running one of the freely available Windows 8 previews. It’s also taken four months for the uptake of Windows 8 preview to reach the level that Windows 7 preview attained after only seven weeks availability. 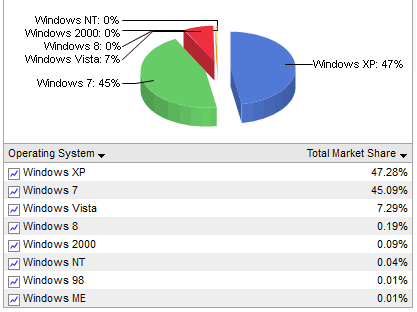 Last week we looked at two separate collections of statistics about Windows 7; one showing how Windows 7 has more than 50 per cent of the desktop market share, another saying Windows 7 is about to overtake Windows XP. Greg Keizer at ComputerWorld looked more deeply into these and earlier stats to see how the popularity of the Windows 8 preview releases compare to those of Windows 7.

The previews of these operating systems were not launched at the same time of year; the first Windows 7 preview was seven weeks earlier in the year than that of Windows 8. However it is still interesting to see the time comparison graph, even considering the one and a half month head start for Windows 7. 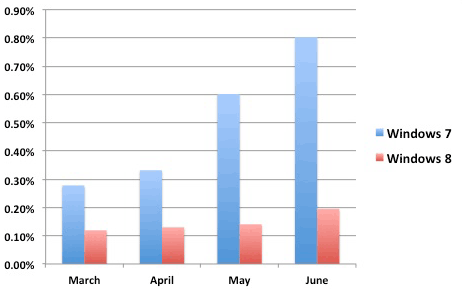 If the time line was adjusted to give both release previews a coinciding start date, then at four months after preview availability Windows 7 was three times more popular than Windows 8. Also is you look at the graph it doesn’t look like Windows 8 is catching up, the graph shows a divergence unfavourable to Windows 8.

Perhaps these figures (NetApplications data is often cited by Microsoft) have nudged Microsoft into issuing their most generous operating system upgrade prices ever. Also whereas Windows 7 was an upgrade that would appeal to the mass market, a headlining feature of Windows 8 is the touch friendly Metro interface. Touch screen equipped PCs are currently only a small minority of those in usage. I explained to my daughter, who has an HP touch screen laptop, how I could install the latest Windows 8 preview for her and she said “I can’t be bothered.” It looks like most people feel that way.

Posted by edvinasm - Mon 09 Jul 2012 11:18
This release sounds like Windows ME or Vista to me. I am definitely skipping the train on this. Just purchased Windows 7 Ultimate and holding on to it.
Posted by YenRug - Mon 09 Jul 2012 11:39
I think the biggest problem is the Metro interface, it's designed for a touch screen interface but being forced onto hardware that, in the main, doesn't have one. Whilst we keep on hearing that there is a “standard desktop” that you can switch to, I've yet to hear if that is a permanent option or something you have to do on every boot up.
Posted by Englander - Mon 09 Jul 2012 11:48
I really struggled with Windows 8. I installed it with the intention of keeping it on my PC for a long time - as I did with Windows 7 - but the Metro interface just ruined it for me. I could not get over the fact that it all felt like it was designed first for smart phones/tablets, with a desktop button tacked on for desktop users. It had some very nice points, for example the tiny boot up time, but for me the damage was already done. I get the impression that this will go the way of Vista. Windows 7 itself does everything I want pretty well, for me it is like Windows XP about 5 years ago.
Posted by cameronlite - Mon 09 Jul 2012 11:50
With regards to Mark Tyson's daughter and her touchscreen laptop, why would you not switch to metro if you have a touchscreen laptop?

YenRug
I think the biggest problem is the Metro interface, it's designed for a touch screen interface but being forced onto hardware that, in the main, doesn't have one. Whilst we keep on hearing that there is a “standard desktop” that you can switch to, I've yet to hear if that is a permanent option or something you have to do on every boot up.

There is a standard desktop and you do have to switch to it on every boot. However because the start menu has been replaced by the metro interface, you'll constantly be returning to the metro UI to launch programs.

If you aren't interested in the metro part there are hacks that allow the old start menu to return. If you only want the desktop part, you might actually find the metro live tiles useful (tells you when to check facebook or emails without opening a browser).
Posted by crossy - Mon 09 Jul 2012 11:54
Hmm, I've not got around to trying the Consumer Preview - mainly because the previous Developer Preview didn't like my VirtualBox setup and the laptop that I use for testing isn't available any more.

From what I've heard the “dissatisfaction” in tech geek/nerd circles is now beginning to filter outwards, so Microsoft might find that pushing ‘8 is going to be a bit harder that ’7. Plus the general consensus was that Vista was nasty, so there was an incentive to upgrade. Now however, folks seem to be quite happy with 7 - so that push isn't there.

That said, I was looking at the weekend at a touchscreen monitor (I hate the LG I got from Argos) with the idea of a bit of future-proofing. (This one http://www.scan.co.uk/products/236-iiyama-plt2451mts-b-black-widescreen-led-touch-screen-monitor-2ms-tilt-1920x1080-10001-speakers if anyone's interested).

At the moment I'm a “no sale” for Windows8 - but if they (Microsoft) can come up with a convincing reason (especially at the <£40 price for the upgrade) then perhaps I could be persuaded.