Intel has released its latest set of financials, covering its financial Q4 and FY 2020 accounting periods. Headlining revelations are: Intel recorded record full year revenue; the strength of PC sales, particularly laptops, helped Intel exceed its own expectations; and incoming CEO Gelsinger said that Intel 7nm was on track for the majority of products in 2023.

The latest results arrived rather dramatically. There were reports that the results had been hacked and released ahead of the closure of the stock markets yesterday in the US, so Intel published the results for all to analyse 15 minutes ahead of the markets closing, to help prevent any trader advantage. To be clear, these results statements are usually released 'after the bell'. The shares shot up by as much as 6.5 per cent in this short remainder of regular trading time. However, things have calmed after-hours, with the price moving down about 2 per cent. 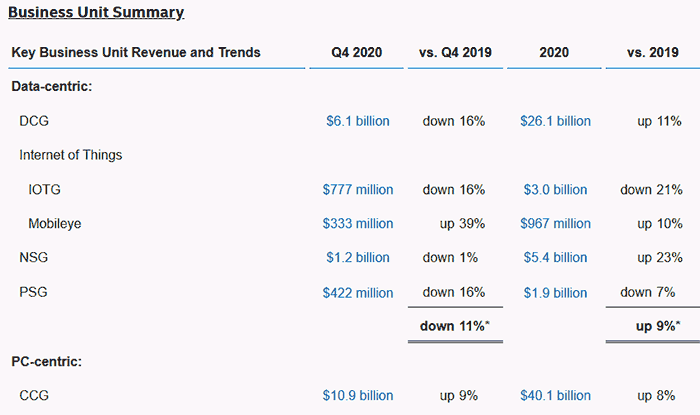 Intel's PC Centric business is by far its biggest, so when it is doing well, Intel is usually doing well. Its second largest business segment, the Data Centre Group offered up mixed results, with revenue down 16 per cent in the latest quarter but still managing to be up 11 per cent YoY. 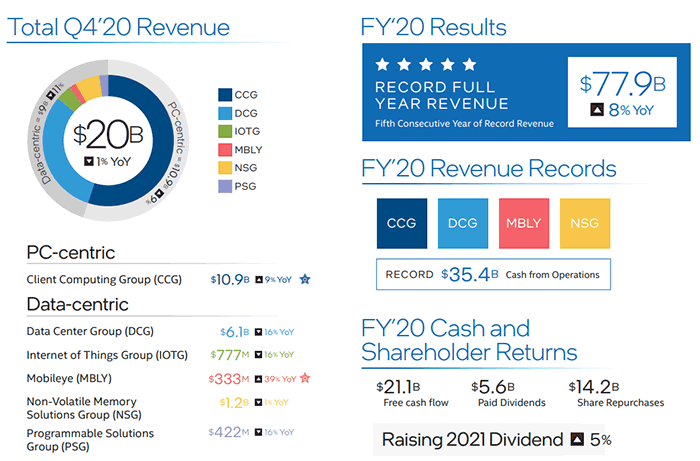 Outgoing CEO Bow Swan will be leaving on this positive note, and wrote that he was proud of Intel's achievements, with Intel in a strong strategic and financial position for the new CEO to take the reins.

The incoming CEO, Pat Gelsinger, was given room to talk about the future in the post results earnings call. Gelsinger said he has already taken time to review Intel manufacturing operations and its 7nm progress. He told analysts and investors that he was "confident that the majority of our 2023 products will be manufactured internally," indicating Intel 7nm mass production will be ticking over smoothly ahead of, or early in that year. However, he warned that Intel would likely increase use of outside foundries "for certain technologies and products."

In some recent related news, Gelsinger appears to be 'getting the old team back together' with the re-appointment of Glenn Hinton, the lead architect for Intel's Nehalem CPU architecture. He revealed in a social media post that he was coming out of retirement to work on an "exciting high-performance CPU project."