In May this year TSMC confirmed it was planning stages to set up a $12bn advanced semiconductor fab in Arizona, USA. The plan outlined that construction would begin in 2021, with production beginning in 2024, with lines designed to output 20k N5 wafers per month. Now news has emerged that Japan wants to similarly adopt the Taiwanese chip making giant.

A Japanese newspaper reported on Sunday that Japan intends to invite TSMC (and other global chipmakers) to build an advanced chip foundry there. The project would be somewhat collaborative with domestic chipmakers, and would be hoped to rejuvenate Japan's semiconductor industry, especially as advanced chip making has been under scrutiny with regard to national security issues. 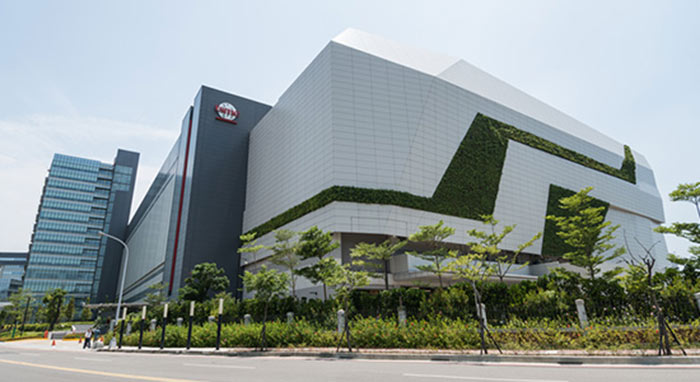 It is easy to understand why Japan, and its domestic chip companies, would want this but benefits gained by TSMC are less obvious - we don't know of any Japan government incentives, for example. The risk in the back of many people's minds, that China might one day consume Taiwan, may also mean this valuable company sees it was wise to take its eggs out of the single basket.

When questioned about the Japan possibility by a Taiwanese newspaper, the company stated somewhat obliquely that "TSMC gives top priority to its clients' demands". In other words I think TSMC is considering things carefully - it was equally cautious of confirming or denying the Arizona plans earlier in the year.

TSMC already has a '7nm/5nm and beyond' design centre in Yokohama, Japan.

Taiwan Semiconductor Manufacturing Company has become the world's most valuable semiconductor maker. It market capitalisation is currently US$337bn, which is tens of billions more than the likes of Samsung, Intel, and Nvidia. 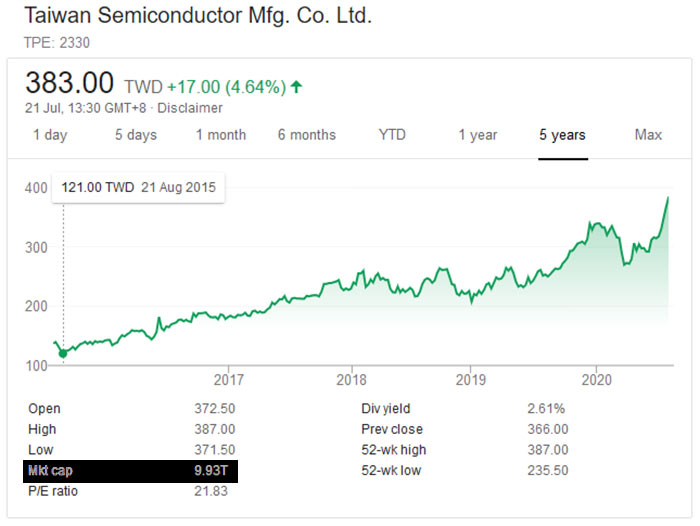 TSMC market cap highlighted in black (TWD). Will it continue to be a good investment?

Late last week TSMC confirmed that it had suspended new orders from Huawei to comply with new US regulations. The company actually hasn't taken any new Huawei orders since May. The result is that TSMC won't be shipping any further wafers to Huawei after mid-September. TSMC isn't too concerned about loss of business as it has plenty of other tech giants queuing up for mass production slots, however it warned in general about slow-downs in the 5G smartphone market.

Posted by philehidiot - Tue 21 Jul 2020 11:28
Huawei is in the news as it has been cut off from supply but, given Trump's recent far-reaching executive order, do we know if Oneplus are in the firing line? I've been looking to upgrade and I've ruled out a Oneplus phone due to the uncertainty.
Posted by CAT-THE-FIFTH - Tue 21 Jul 2020 11:34

philehidiot
Huawei is in the news as it has been cut off from supply but, given Trump's recent far-reaching executive order, do we know if Oneplus are in the firing line? I've been looking to upgrade and I've ruled out a Oneplus phone due to the uncertainty.

BBK Electronics own Oneplus,Oppo,Vivo and Realme. They actually have probably have as much share as a company as Huawei. Not sure why you should rule them out,especially since the distro of Android they ship with is this:
https://en.wikipedia.org/wiki/CyanogenMod#Cyanogen_OS

philehidiot
Huawei is in the news as it has been cut off from supply but, given Trump's recent far-reaching executive order, do we know if Oneplus are in the firing line? I've been looking to upgrade and I've ruled out a Oneplus phone due to the uncertainty.

It won't, the concern with Huawei is to do with the infrastructure side rather than phones, and OnePlus and its parent companies aren't involved in that.

In any event, any phone that's been released before any sanctions come into effect will be unaffected, so you can happily buy e.g. a OnePlus Nord without risks.
Posted by watercooled - Tue 21 Jul 2020 12:19
Yeah the side-effect of harming Huawei's phone business was a side effect of the shenanigans, not a cause. I'm sure the protectionists see it as a convenient one though given it removes one of Apple's biggest competitors. The irony being Apple stuff is still made in China…

Part of me has wondered whether Huawei could spin-off their phone business in some way to avoid the sanctions, but I know it's not necessarily that simple. It's a real shame to lose a good competitor in the market; they offered a pleasant change from the status quo of needlessly hamstrung and overpriced ‘mid-range’ devices.
Posted by rave_alan - Tue 21 Jul 2020 13:33
Trump is not looking for win-win kind of business, his whole career he used force, not sure if it works this time.