AMD shared some very good looking results in its third quarter 2019 financials. In fact the tech firm reported its highest quarterly sales figures in over a decade. However, at the time of writing, its share price is moving into negative territory (~ minus 2.5 per cent) in after-hours trading as most analysts had expected better. A cursory glance at the results tables reveals that weaker performing business segments dragged the company down. 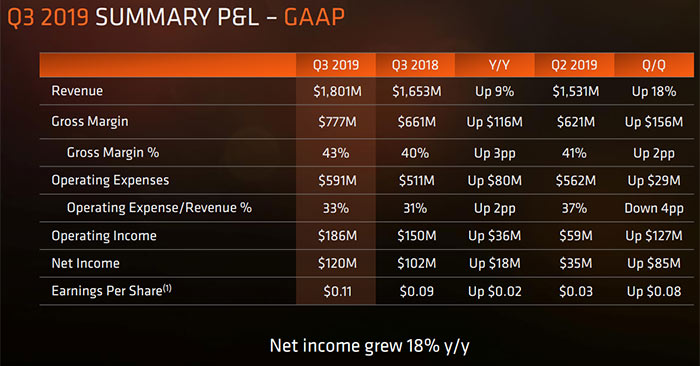 You can find AMD's official release, slides and webcast on its investor relations site. In summary, you can check over the tables above and below. On the surface, the Q3 2019 revenue was $1.801m, up 9 per cent YoY, and 18 per cent QoQ. More impressively net income was up 18 per cent YoY, and AMD enjoyed its highest quarterly earnings per share since Q4 2011 (up $0.05 to $0.18).

Pondering over our favourite PC tech company figures it is always essential to check through the segment results. Above you can see AMD's revenue and income broken down by business segment. You can see that Computing and Graphics is by far AMD's biggest segment with regard to revenue / income and was up and impressive 36 per cent YoY and QoQ. AMD said that there was notable strength in Ryzen and Epyc processor sales behind this. Unfortunately enterprise, embedded and semi-custom sales dragged down the results with revenue down 27 per cent YoY and 11 per cent QoQ. 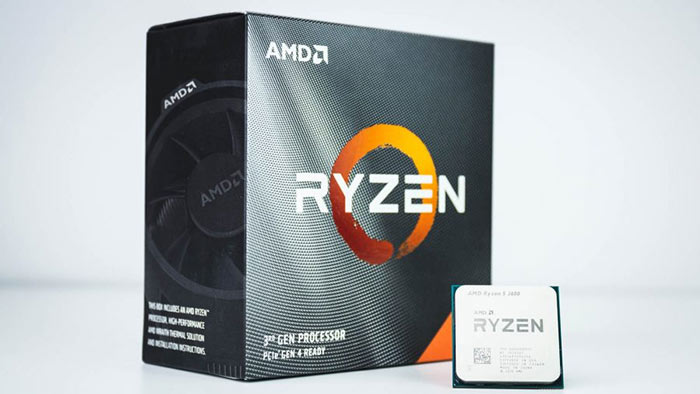 Some more details about the above trends were revealed in the conference call with Dr Lisa Su. The CEO confirmed that AMD "increased net income significantly…all driven by our first full quarter of 7nm Ryzen, Radeon and Epyc processor sales". Consumer sales of Ryzen chips were particularly strong and AMD was seeing success in expanding Ryzen orders into commercial, financial, retail, education, and healthcare. Laptop design wins with AMD processors were up 50 per cent this year and the Surface Laptop 3 15 was highlighted as a prestigious contract. Epyc processors sales were also strong with significant new customers like Twitter and Google using the powerful many-multi-core chips in servers. 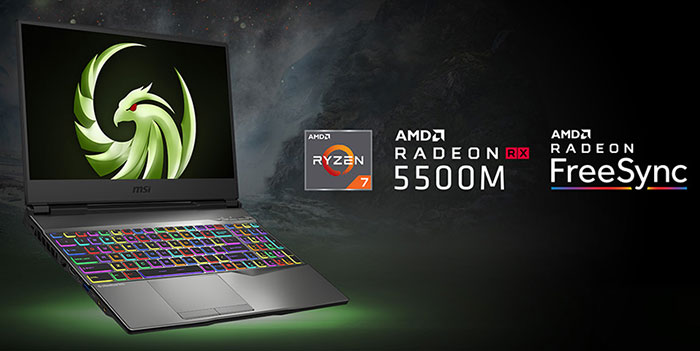 Moving onto GPUs, this area was roughly flat for AMD but helped by some high level cloud and HPC wins this year. In the near future AMD partners will start to ship PCs with Radeon RX 5500(M) GPUs. Meanwhile, Samsung smartphones powered by AMD graphics are starting to generate revenue for AMD.

If you remember from above that the semi-custom sales were a rough patch in the results - that is because both Microsoft and Sony are winding down current gen console production ahead of the ramp up of next-gen designs for Holiday 2020.

Posted by KultiVator - Wed 30 Oct 2019 11:08
Those figures are pretty good, especially since many have been waiting for the new higher-end Ryzens (e.g. the 3950x). The delays bringing these to market will have had some dampening effect on revenue.

The next couple quarters will see the top-tier Ryzen and ThreadRipper CPUs gain a foothold and start eating away at Intel's high-end desktop share… then there's the as yet unannounced GPUs with hardware-based ray-tracing to follow in the not so distant future (the Xbox Scarlett and PS5 dev kits include pre-production AMD GPUs with these capabilities already).

Dr Su's commentary stacks up better than the hype and hot air produced by Intel and NVidia these days.
Posted by scaryjim - Wed 30 Oct 2019 11:09
Markets, huh? If I'm reading that right, both operating expenses and net operating loss went up, but they still managed to turn an overall 17% increase in net profit year-on-year. That despite what should have been an anticipated drop off in semi-custom revenues due to the console renew cycle.

scaryjim
Markets, huh? If I'm reading that right, both operating expenses and net operating loss went up, but they still managed to turn an overall 17% increase in net profit year-on-year. That despite what should have been an anticipated drop off in semi-custom revenues due to the console renew cycle.

Where exactly do people think AMD are underperforming?!

That would imply the people doing the investing actually looked deeper than the figures… Most share buyers are semi-automated pension and hedge funds - always chasing the bottom line today not tomorrows.
Posted by Tabbykatze - Wed 30 Oct 2019 12:54
Wonder if the business side will spike up as adoption for EPYC Rome increases?

Very nice figures from AMD.
Posted by will19565 - Wed 30 Oct 2019 18:30
what could really eat into AMD is Intel releasing their Xe GPU's in 2020.
especially if they found a way to make them perform better with their own products (dunno about any potential legalities)