In addition to streamlining the appearance of its hardware, Tesoro is also taking the opportunity to refine the software ecosystem with a new utility dubbed Tesoro 360. It's a desktop app that sadly doesn't use our preferred Universal Windows Platform, and Tesoro tells us 360 will eventually become the one-stop software solution for all its upcoming hardware. 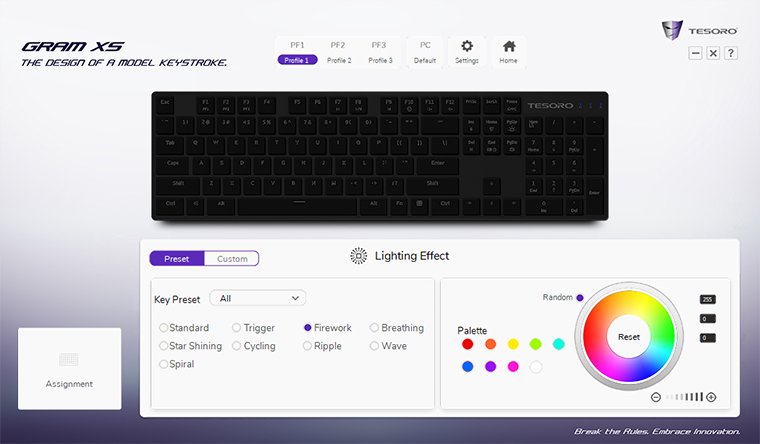 Right now the software is said to be 80 per cent complete, which is a tad worrying considering that Gram XS is now available at retail, but we're told to expect a final software release with custom lighting options and further bug fixes by the middle of next month.

First impressions are nonetheless quite positive. Tesoro's interface has a light and airy feel to it, with quick shortcuts to the four built-in profiles and all the customisation options split into two areas; lighting and assignment. The former, pictured above, offers quick access to a bunch of preset lighting effects and when applied colours are both bright and accurate. 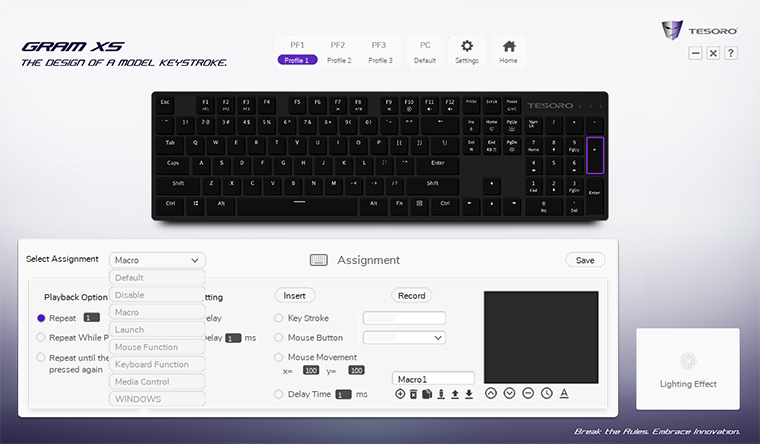 Assignment is where most of your customisation will occur. Keys can be disabled, re-assigned, set to a macro that can include both keystrokes and mouse input, or as a shortcut for multimedia functions or media controls. The essentials are well catered for, and though Tesoro 360 isn't the most feature-packed peripheral utility we've ever seen, it's a solid start that will no doubt evolve with time.

...Tesoro does a decent job of presenting mechanical functionality in a relatively sleek profile.

Tesoro's attempt to streamline the mechanical gaming keyboard is inevitably going to divide audiences. Some will be hoping that the chiclet keycap and slim switch deliver the best of both worlds, while others will fear for a technology that struggles to excel in any one area.

Gram XS is ultimately a compromise, but Tesoro does a decent job of presenting mechanical functionality in a relatively sleek profile. This is one of the best-looking mechanical solutions on the market, and though die-hard gamers may scoff at the shorter travel, others wanting to streamline their workspace will view it as a minor concession.

The keys feel good during use, there's no flex to the tray when bottoming out, and though our experience of the red slim switch suggests that the actuation point isn't quite as precise as, say, a full-fat Cherry MX, it's a marked improvement over a membrane or scissor-switch alternative. General typing feels quick and responsive, albeit a little noisy, and the slim switch is particularly well suited to fast gameplay. This was always going to be a balancing act, and Tesoro has judged it quite well.

Falling short of perfection makes the $120 fee seem a sizeable hurdle, yet Gram XS is on the right track and reinforces the belief that mechanical gaming keyboards can look good and play well in equal measure. The shallower mechanical switch remains an acquired taste, but these ingredients in a wireless, tenkeyless form factor would really have us intrigued.

The Gram XS low-profile mechanical keyboard is available to purchase from Tesoro Store.

Posted by Ozaron - Sun 25 Mar 2018 15:03
Wait, why do you prefer Universal Windows Platform?
Posted by ByteMyAscii - Sun 25 Mar 2018 21:27
I find the comments early on about the size of mechanical keyboards to be problematic.
Their footprint is going to be similar to any other construction, be it membrane or otherwise for any keyboard with the same number of keys.
They aren't “taking up your whole desk” more than any other.
And thickness-wise again standard cherry-type keyboards aren't different from bog-standard membrane keyboards we have been using for years.
And low-profile isn't simply better, but purely a preference for some.

Cherry are producing low profile switches now, so that should prove an interesting comparison later on.

The software being incomplete and being updated is also a trend, even from more recognisable names.
Posted by afiretruck - Mon 26 Mar 2018 12:11

Ozaron
Wait, why do you prefer Universal Windows Platform?

Thank you! I was about to ask the same.

Why would any software developer want to lock themselves into a single platform that offers no sizable benefits? Not to mention the complete lack of Windows 7,8,8.1 support (especially when Windows 7 is still used by a sizable number of gamers).

Nice looking keyboard, though! I've been waiting for this key style for a while now.
Posted by phoenixmystic - Mon 26 Mar 2018 12:14
I am going to second with ByteMyAscii though I do also want to add.

Where is it mentioned about the lack of compatible keycaps? Getting your own preferred set is a big thing with mech boards and I do not see a mention of it here. Those switches have few keycap sets available and even fewer when you factor in the low profile.

Are the switches plate mounted or PCB? Are they soldered? Just my little opinion but it is these sort of questions that are important to a mech user.
Posted by Valantar - Mon 26 Mar 2018 12:19

Ozaron
Wait, why do you prefer Universal Windows Platform?

Automatic, no-input updates and tighter control over what the app has access to? Sandboxed execution? Better platform integration? Even if UWP has some drawbacks, it also has a whole load of upsides. I for one am ready to leave behind the “a new version is available” notifications every time I start CPU-Z, HWmonitor, VLC and whatever else.

As for the keyboard, I like the concept, but the numpad makes it an ergonomic no-go for me. Even if it came in a Norwegian layout I'd need a shrunken version, and Brown-type switches. Blue are obnoxious, and red leaves out the key advantage of mechanical switches, tactility. Sure, they're “faster” and still as predictable in their response, but what does that help if you have to bottom out every stroke to make sure it registers?