The EVGA Z10 RGB mechanical gaming keyboard was teased back at Computex 2019, last summer. This would be a more colourful iteration of the existing EVGA Z10 (mono, red backlighting) with various tweaks such as the new EVGA Unleash RGB Software. 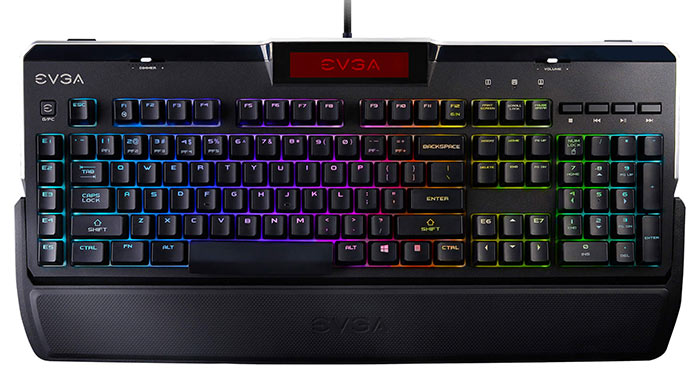 EVGA's Z10 RGB mechanical gaming keyboard isn't going to exist alongside the previously released red backlit version, rather it is a replacement for that model. This makes sense as the original was rather pricy for a mono backlit device with Kailh Blue or Brown switches (considered by some to be a notch beneath Cherry MX switches). Poring over the specs of the old and new versions of the Z10 there really doesn't seem to be any difference other than the colourful backlighting and the associated new software to configure, save, and recall lighting, macro and other features. 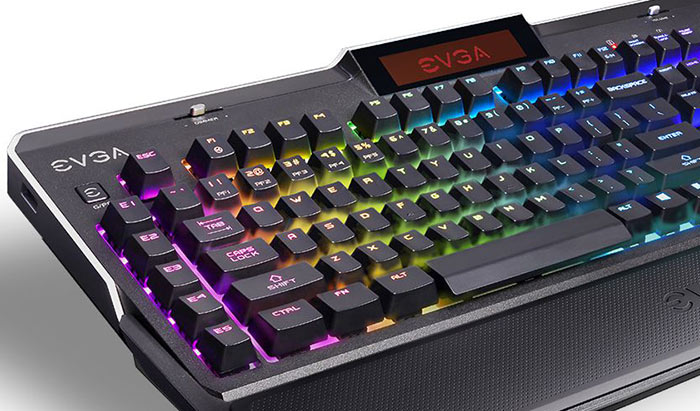 Among the best features brought over from the earlier Z10 are; the configurable LCD display, the array of Macro keys to the left of the main keyboard deck and filling out the inverted T arrow cluster, sliders for overall brightness and system volume (though I find dials or rollers preferable), dedicated media keys above the numpad, and the built-in USB hub. 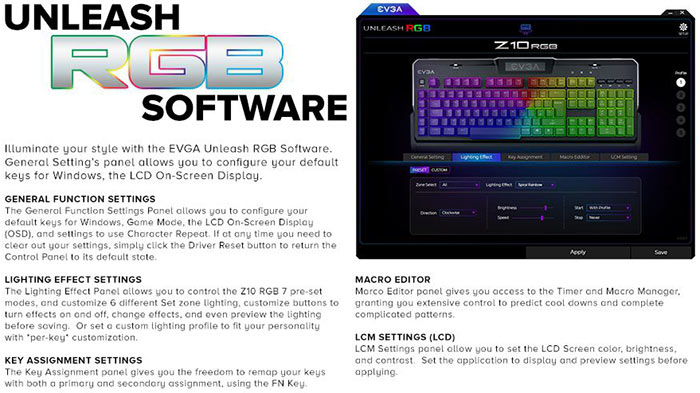 Before being discontinued the original EVGA Z10 keyboards were on offer for $69.99 direct (MSRP $149.99). In this competitive market with many reputable competitors the new EVGA Z10 RGB looks to be somewhat overpriced at an MSRP of $199.99 even though there is currently a $20 instant rebate making it $179.99 direct.

Posted by Ttaskmaster - Tue 28 Jan 2020 14:50
Only USB2.0? Should they not be on 3 or 3.1, these days?
Keyboard tripod looks nice, but could be delicate.
I like the volume slider, though would have been equally happy with a dial. At least it's not a roller.
LED panel will be interesting. I still adore my G19, though, as I can customise an HWMon applet to display whatever I want or run any number of in-game applets, all in full colour.
Needs more macro keys up the side.

I actually like the look of this thing. It's not as feature-packed as it could be, and I'm guessing the price and mech switches play a part in that, but if I were in the market I might well look into this one.
Posted by Tunnah - Wed 29 Jan 2020 01:34
Is it me or does that look…clunky ? Not sleek and smooth, just lots of rough shapes.
Posted by cronicash - Wed 29 Jan 2020 05:12
So wait, the keys have a wider spectrum than the screen? Bit arse about face?

One would think premium would be going just a tad further than a membrane color lcd keyboard from nearly a decade ago? (G19 cough cough)
Posted by maverick77_uk - Wed 29 Jan 2020 11:38

You'd have to be quite a typist to overwhelm the 480 MegaBits speed of USB2! ;) My rough maths makes that that you'd need to type faster than 60,000 characters per second to exceed USB requirements.

maverick77_uk
You'd have to be quite a typist to overwhelm the 480 MegaBits speed of USB2! ;) My rough maths makes that that you'd need to type faster than 60,000 characters per second to exceed USB requirements.
Number 5 is alive! Need input! ;)

Forget typing. I'm talking about the pair of USB2.0 ports on the sides, into which I'd want to plug peripherals, phones and other stuff that benefits from 3.1….