At an in its Tokyo HQ earlier this week, Sharp showed off a number of interesting new products and technologies. The most interesting new things, as covered by PC Watch Japan via Anandtech, stood out due to the innovative and envelope-pushing display technologies that Sharp is famous for.

We have seen 8K displays announced before in both the TV ad monitor segments, but Sharp's latest 31.5-inch IZGO panel, as used by its AiO PC is an HDR model with a 120Hz refresh rate. According to Google Translate the AiO isn't just a curiosity or tech demo, it is set to be commercialised by Sharp. The same display will be made available separately for connection to other PCs. 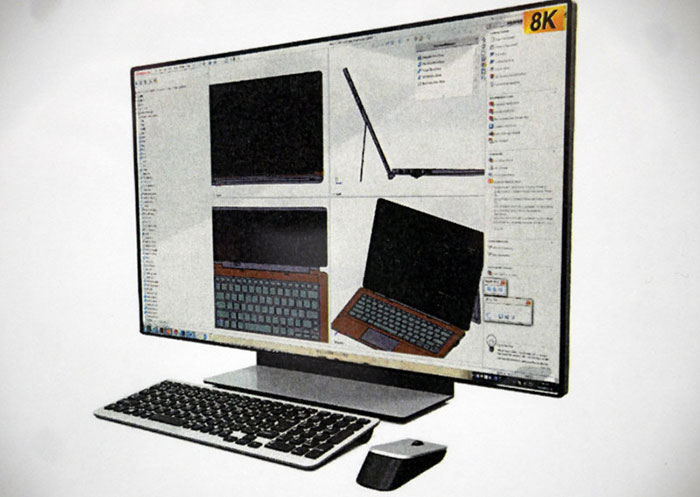 In its presentation Sharp said that the 8K AiO PC is a high performance machine that display 16x the detail of a standard tablet or PC screen and "uses AI-optimized screen division technology". This might be required to intelligently keep up with the data transfer demands of an 8K monitor (7680 x 4320 pixels) with 10-bit visuals and 120Hz refresh, which could need up to 4x inputs working in concert to deliver the bandwidth of 120Gbps or 15GB/s.

Sharp says that its AiO PC will offer a mechanism for user upgrading of video cards, memory and so on. It is good to hear of such accessibility in an AiO. Lastly it is possible Apple will be devising a new iMac Pro based upon this same screen.

Expanding its 8K product portfolio, Sharp also showed off a compact 8K video camera, which it had previously revealed at CES 2019 and noted that its AiO could be a good match for editing the video.

So far we have seen a number of landscape oriented foldable smartphones, from the likes of Samsung, Huawei and Royole. However there seems to be more interest from HEXUS readers in the possibility of a portrait oriented foldable. We have only seen drawings and renders of such smartphones so far, but the most highly anticipated such mobile seems to be a RAZR revival from Motorola.

At its show in Tokyo, Sharp showed off a likely candidate for screen choice for portrait foldable smartphones. The 6.18-inch OLED display it showed has been successfully tested past 300,000 fold/unfold cycles.

At Display Week 2021 it revealed larger foldable panels and an under display laptop webcam.

A high-framerate IPS screen that doesn't break the bank.

Worth to mention: Sharp has several times in the past showcased future tech and said it will be availabe very soon only to show up several years later.

Several companies are still passing of 4K@60Hz as so called PRO monitors with high pricetags so taking the jump to 8K@120Hz sounds like it is way to early to hit the market.

Stukes
Maybe it's just me, but both of these things seem like answers to problems no one has.

True, but i think them boasting about this display tech is what is more important here.
Posted by philehidiot - Mon 15 Apr 2019 10:36

Stukes
Maybe it's just me, but both of these things seem like answers to problems no one has.

I dunno, women's trousers come with stupidly small pockets a lot of the time and so they may well appreciate a phone that doesn't dangle out.