Apple has unveiled a new MacBook Pro featuring the very high resolution screen known as the Retina display. The high pixel density (220ppi) display offers over five million pixels within its 15.4 inch diagonal size. The screen resolution, measured in pixels is 2880x1800. We had previously reported rumours of the specs of various Mac models in these WWDC announcements, which have turned out to be correct.

Apple call this the “next generation MacBook Pro”. In addition to the exceptional display the computer has been upgraded in several other ways, I’ll list the Retina MacBook Pro specifications below to make it easy to see.

The other new MacBook Pro models announced were the 13 inch and 15 inch Pro models with standard displays with native resolutions of 1280x800 and 1440x900 pixels respectively. Also they are bulkier than the Retina equipped model at 2.41cm thick. These MacBook Pros are all upgraded to use Ivy Bridge processors and the 15 inch model has GeForce GT 650M options.

MacBook Air 11 and 13 inch models have also been updated and both models feature Ivy Bridge i5 processors and the usual accompaniments to that chipset such as USB 3.0 and Intel HD 4000 graphics. These 11 and 13 inch ultra-portables have battery lives of up to 5 and up to 7 hours respectively. 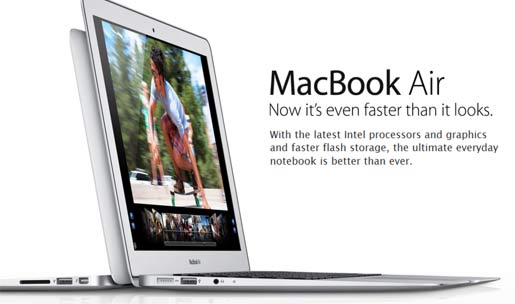 Apple CEO Tim Cook is especially proud of the new MacBook Pros “The next generation Macbook Pro is the most beautiful computer we've ever made. There's never been a notebook that is this gorgeous.” Phil Schiller, Apple’s senior VP of Marketing, went even further to ask the question to reporters; “Isn't the bottom of our computer prettier than the top of anyone else's computer?” However it’s the Retina display that is the headline feature of the new MacBook Pro models. Sharp enough at normal viewing distances so that pixels are not discernible, the biggest Retina display we have seen so far. We can’t show that in our screenshots.

Now, can I ask, why has the rest of the IT world been happy dawdling around with 1080p for so long? I know we can get 2560*1600, but the screens are really expensive and huge.

Embarrassingly, I'm going to have to ask you to catch up please.
Posted by warejon9 - Tue 12 Jun 2012 14:03
I have to say that the retina display version does look amazing, still wouldn't buy one though :p
Posted by j.o.s.h.1408 - Tue 12 Jun 2012 14:22
i will wait for the Dell alternative for half the price of this. good specs though
Posted by Bunjiweb - Tue 12 Jun 2012 14:29
If I had all the money in the world I would buy one of these and get a custom engraved lid to hide that hideous apple logo abomination, then stick Windows 7 on it instead….
Posted by Hicks12 - Tue 12 Jun 2012 14:31
Agreed snooty, this is the first apple product ive actually though has a pro :P, however the price as usual is a major off i wouldnt be able to justify £2k on a laptop, i could have put that back for ~15 years worth of main system upgrades (i try to get a major revision/replacement every 4 - 5 years, gpu usually stays around 2 or 3 and traded up).


Now i will be getting a new lappy next year so hopefully LG(or whoever is making the panel) will be selling it in every other device, id like a nice 15 or 17“ display at that res! It is quite depressing that my main monitor is a 23” 1920x1080… its got a higher res than mine :(, COME ON LG.