Apple has launched its updated MacBook Air laptops which are claimed to be up to 2x faster, offers twice the amount of base storage, and features the new-old-tech Magic Keyboard. These new thin and light laptops start at £999/$999. The oft neglected Mac Mini has also been updated today, again with double the standard storage, but with 8th gen Intel Core processors, and with prices starting from £799. 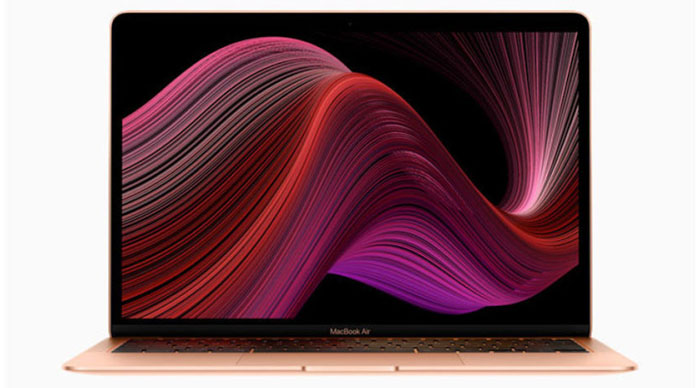 With its new 10th Gen Intel Core processor Apple asserts that the MacBook Air is up to twice as fast in CPU intensive tasks with graphics up to 80 per cent faster than the previous gen. Processor choices span from the 1.1GHz dual core Intel Core i3, up to the 1.2GHz quad-core Intel i7 which has an L3 cache of 8MB and a turbo speed of 3.8GHz. Accompanying the Intel CPU is Apple's T2 security chip for boot security, on-the-fly encryption, and more.

Another important upgrade, to the base model, is that the minimum storage is now a 256GB PCIe SSD. That is double the previous lower limit of the base-price machine. Buyers can configure up to 2TB of SSD storage when purchasing this laptop – again double the previous amount. As standard the Macbook Air still comes with 8GB of RAM but it is possible to upgrade to 16GB.

Apple is using a 13.3-inch 2560 x 1600 pixel IPS screen with its True Tone technology in this new laptop. This is the only screen option. Compared with rival thin and light designs such as the Dell XPS 13, the MacBook Air bezels look rather chunky.

Other key specs of the design are as follows:

Last but not least the MacBook Air's keyboard has been upgraded to one featuring the older tech often referred to as scissor switches. The new 'Magic Keyboard' features here which debuted on the 16-inch MacBook Pro in November last year. This move solidly establishes Apple's intention to move away from the problematic butterfly switches across all its keyboard-packing devices. 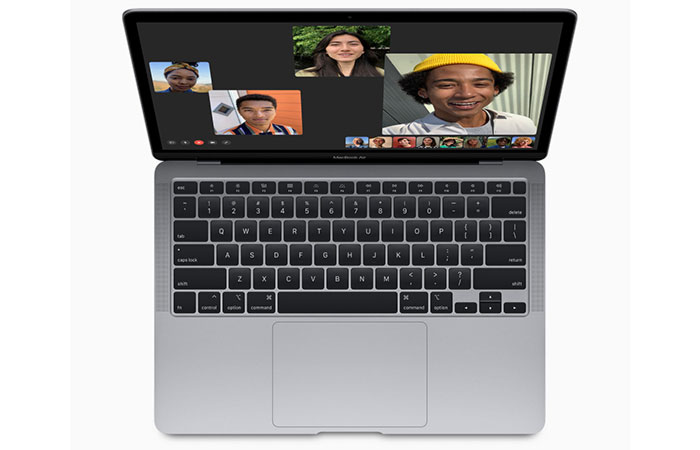 Apple is making its updated MacBook Air models available to pre-order in Space Grey, Gold and Silver from today. Shipping estimates point to a delivery of between 6th and 15th April in the UK at the time of writing. Remember, Apple has suspended trading from its bricks and mortar stores until further notice, everywhere except mainland China.

Nelviticus
It's 2020 and the base storage has been doubled _to_ 256GB? Seriously?

Way to go Apple STEREO like it's erm new
Posted by edmundhonda - Wed 18 Mar 2020 19:03
£799 for that Mini with an i3-8100: just in case you didn't think NUCs were expensive enough
Posted by philehidiot - Wed 18 Mar 2020 23:26
I have a 2011 Air. I think it's awesome. I really like it as a change from Windows for many reasons but, when I had a problem, despite it being £1200 of machine, despite me having Apple's care plan and despite me showing up to the store with the defective part in person….. Apple did not want to know. The store guy said “no, unless you bring the whole lot in, not just the defective part” and emails went unanswered.

For The price of the kit it goes beyond a simple laptop purchase and into the realms of a long term investment for which there should be adequate support. It's like buying a car - if the manufacturer has poor support you could be left with a totally useless, expensive paperweight. Especially with Apple trying to make it almost impossible to repair outside of their own services.

My Air is amazing to use but I can not justify the risk of buying an Apple product and them treating consumer protection like it's optional. If I buy something dirt cheap I know the support will be the part that suffers and I accept that risk. Just from memory we have:

-the keyboard issues which they denied existed (ingress, now “MAGIC” keyboard which is magic because it works)
-the phone which lost signal because most of the people who bought it were “holding it wrong”
-chargers which fail JUST outside of the warranty period and electronics so fragile that anything other than a very high quality third party charger could kill your device
- phones which rely on a brand new battery to perform as specified, slowing down over time as the peak available voltage drops off and extortionate battery prices (until caught)
- the bricking-by-update of phones which had a non-Apple screen replacement
- “Genius bar” which prescribe a new mobo for a dodgy connection
- engineering fails such as claiming a “unibody” where it's actually glued together and putting the glue holding it together next to the heatsink and then refuse to resolve the £2000 machines that drop apart
- having high voltage pins unprotected and next to low voltage data pins (leading straight to the CPU or an expensive ASIC) in a connector in a notoriously fluid ingress prone position with no proofing, using capacitors in always on circuits not designed to be always on and letting them fail, requiring expensive repairs or new products
- offering repairs for a problem (?GPU?) for machines that came out in 2010 only for three years from the date of purchase and oh, yes, starting that “warranty” repair service in 2013, leaving early adopters screwed, only servicing those who bought the machine when it was old stock.
- “repairing” boards by baking them as a temporary fix to get it to last a few more months and then fail again.
- failing batteries which are so tightly packed in when they expand due to failure they distort the case and crack the trackpad so your machine dies and no, you can't change the battery yourself and you'll have to pay for the secondary damage from a known battery failure mode.
- making user upgrades / repair practically impossible so as to force you into the Apple system under the guise of “security” or “think different”. No, my SSD doesn't need to be on a different board and tied to a specific chip for security. It just needs to be encrypted but you're making sure I can't just replace it with a different M.2 drive without coming through you….

That's just off the top of my head, I'm sure there are loads more. For me, they didn't support me and left me out of pocket. That being said, I repaired with a third party component and it has lasted maybe 7 years now. The Apple ones were known for failing in 14-18 months, repeatedly and costing £60 a go…