Microsoft's Surface Laptops have historically been rather challenging to teardown for upgrades, maintenance or repairs, say the experts at iFixIt. However, the team were moderately hopeful when the Microsoft Surface Laptop 3 15-inch arrived in the labs. The reason being that during the recent Surface Event, where this laptop was launched, Panos Panay showed how easily 'serviceable' the new laptop design was.

In the video above, from approx 19mins 40s in, Panay says that Microsoft's designers wanted to keep the "purity of the design" but especially for commercial customers it was desirable to improve serviceability and repairability. Panay asserts that Microsoft's designers managed to square this circle - without adding any inelegance, weight, or thickness - and especially no trap doors.

He showed how easy the keyboard deck can be removed to reveal the key upgradable components. The laptop shown in the presentation had already been prepared for this access though. As iFixIt finds, to get to this stage a few screws from the underside of the laptop need to be removed first and after that there is just a ribbon cable under the keyboard that needs to be delicately detached. 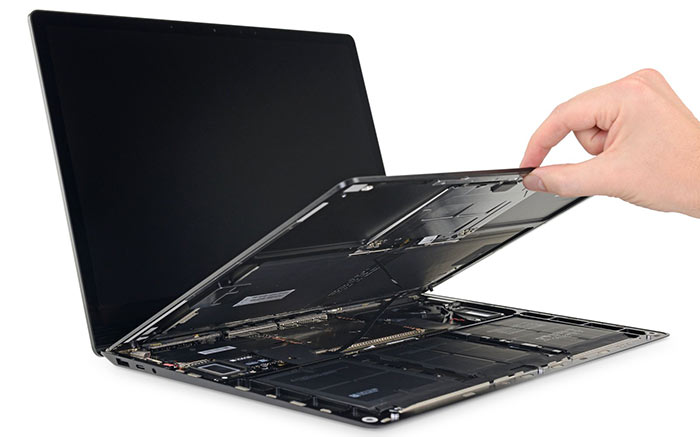 Perhaps the biggest difference is that after the screws were removed a person disassembling the Surface Laptop 3 15 doesn't have to do battle with delicate components stock to each other with very strong double sided tape or glue. Instead, Microsoft's designers have installed a series of magnetic components. These are seen in iFixIt's teardown as "some unusual dark bars around the perimeter," of the inner chassis. 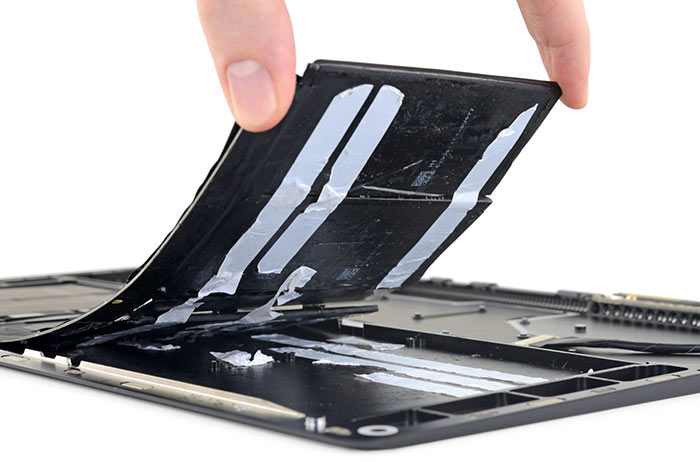 While the SSD was easy to change, as it is exposed as an M.2 2230 SSD secured by a single Torx screw, sadly the memory is soldered in. Furthermore, any battery removal and replacement will be a "miserable" process according to these experts, largely due to the copious amounts of adhesive deployed (see above). Another negative was that while it is easy to access the screen assembly it must be replaced as a complete unit (expensive). 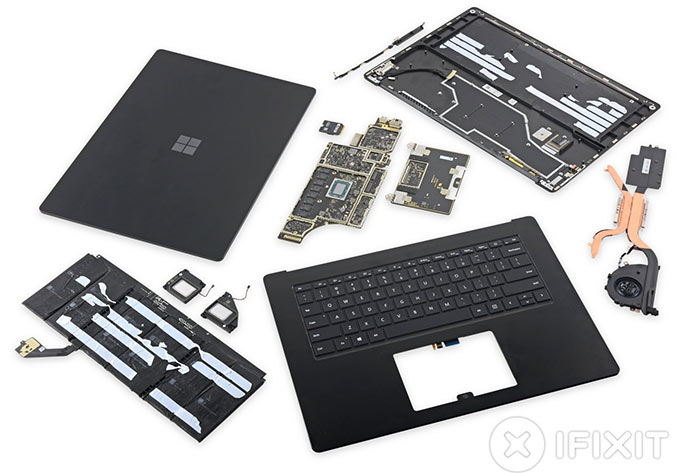 In summary then, the new Microsoft Surface Laptop 3 15-inch is a big step in the right direction for serviceability - and gets 5 out of 10 from iFixIt.

Posted by cheesemp - Fri 25 Oct 2019 15:37
This is good news apart from the battery and RAM which are the two components after the SSD you are most likely to change! I wish devices had replaceable batteries nowadays. I did an ipad4 the other day and it was so stuck together it was crazy. I keep finding perfectly usable equipment is now binable just due to dead batteries! I just don't understand it…
Posted by blokeinkent - Fri 25 Oct 2019 19:24
I was going to give them some credit to MS until I saw the RAM was soldered. Really? Still? After making the effort to go so far and then failing like that. Boo, Shame…. SHAME!
Posted by [GSV]Trig - Sat 26 Oct 2019 08:27
TBH I don't think it would take much to make the batteries easier to replace, MS seems to be using similar white double-sided tape that Apple use on iPhones, there are 2 covered “tags” that you can pull that pulls the tape out and then the battery drops out, wouldn't be much of a change from MS end…
Posted by DWhitley - Sat 26 Oct 2019 11:30

cheesemp
I keep finding perfectly usable equipment is now binable just due to dead batteries! I just don't understand it…

Couldn't agree more - and at a time when waste, and plastic waste in particular, is being criticised. I know several people who get very excited about plastic bottles but see nothing wrong with ‘upgrading’ their smartphones and fitness monitors with depressing regularity.
Posted by Xlucine - Sat 26 Oct 2019 15:50
It'd be nice if they used less adhesive, but the battery is still removable - it's not as if you need to unstick it to access anything under it, so if you're pulling it out then it's going in the bin anyway so you don't need to be too gentle with it. It's not going to stop anyone from replacing the battery, basically, whereas a glued on keyboard that'll need replacement each time you open the chassis will