Current industry estimates of TSMC's N5 capacity put it at between 55,000 to 60,000 wafer starts per month. Apple is by far the biggest N5 customer with its newest iPhone chips (A14 Bionic) and its 'Apple Silicon' processors (like the M1, and probably several unannounced more powerful SoCs).

Later in 2021 it is expected that Apple will launch a new iPhone with updated N5 processor, and around the same time both AMD and Qualcomm will be hopping onboard which could crank up demand significantly, so TSMC has to prepare. China Renaissance Securities, via Tom's Hardware, has forecast that in a year's time TSMC will have double the N5 capacity it has now (including N5, N5P, and N4 technologies) to up to 120,000 WSPM. It reports that the majority of TSMC's capital expenditure this year has been in getting production ready for this feat of manufacturing scaling. 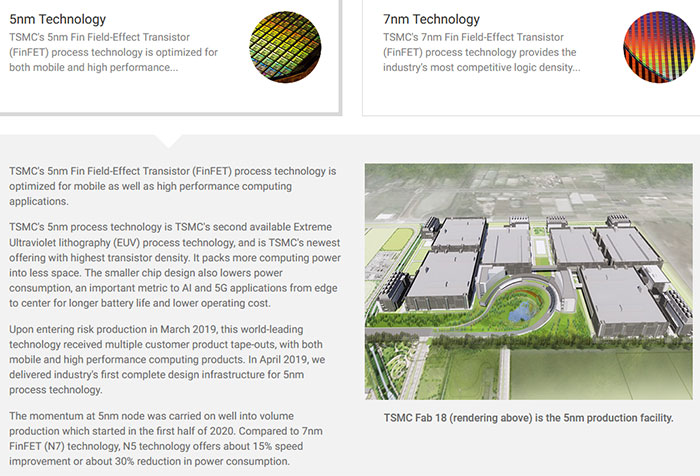 The next long node for TSMC will be N3, says the report. While we will get risk production of N3 later this year it isn't expected to transition to volume production until H2 2022. Thus, it sounds like Apple might be able to use TSMC N3 fabricated SoCs in its iPhone 14 range.

According to Nystedt's sources in local media "excess capacity for the 2nd quarter has gone to the highest bidders at a 15%-20% premium". What excess capacity? – I hear you all ask. History shows that TSMC will continuously improve and refine its foundry operations with stringent quality control, supported by AI and ML technologies on the production lines. Even if it doesn't expand its factories physically, production improvements can deliver spare capacity, as do refinements of N7 such as N7+ and the 18 per cent denser N6. It is likely such efficiency wins will allow capacity to be auctioned off - but let us hope that the water supplies don't dry up.

but let us hope that the water supplies don't dry up.

There's a pond in that render. Let's just hope we don't have them presenting their latest and greatest wafer of chips with a duck pressed into it.