Among the current generation Ampere-based GPUs, Nvidia's GeForce RTX 3090 sits at the top of the stack. This situation is going to change in the not-too-distant future, according to Twitter's Greymon, a hardware leaker usually more closely associated with AMD products. This rumour is interesting for a number of reasons, for example, one wonders why this full GA102 GPU isn't being dubbed a Titan, and whether this is the first sign of the launch of several new Super RTX 30X0 models. 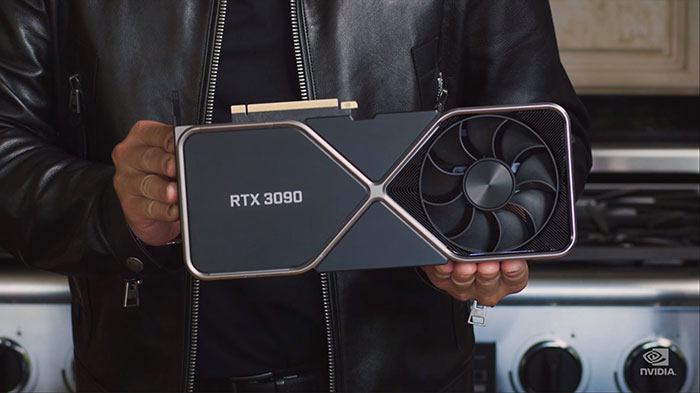 Considering the small increment in CUDA cores (in percentage terms it's 2.4 per cent up from the RTX 3090), and the power hike, will the RTX 3090 Super be worth it? The answer seems to be that whatever Nvidia might release at the top end, with whatever premium pricing is applied, it will sell in today's market. This will be all the more true with this maxed-out 'halo product'.

Even if the Twitter sourced rumours of the RTX 3090 Super are correct, there is still a lot we would like to know about this offering, especially specs like the memory configuration.

VideoCardz reckons the GeForce RTX 3090 Super may be part of a wider Super refresh that has been prepared for Q1 2022, to help reaffirm Nvidia's position in the consumer GPU market when Intel Arc Alchemist arrives.

I think that's the given :)

The power hike is the interesting bit - its already been shown how much that can help boost things, but even then..it still won't be worth it.
Posted by Saracen999 - Thu 26 Aug 2021 10:55
I guess it depends on what you need, but I don't need even standard 3090, let alone Super, and no way am I paying anything like current 3090 prices, let alone even more.

A Super will, IMHO, be either a pretty niche product, or for those where money is no object. Or more likely, both.
Posted by CAT-THE-FIFTH - Thu 26 Aug 2021 11:19
Its easy to see what Nvidia is doing here. They will replace the RTX3090 eventually with the RTX3090 Super at a higher RRP. Then one by one they will eventually replace the other models with Super variants - will be interesting to see if RRPs will rise too,especially for the “new” RTX3060 and RTX3070 variants we will eventually see.
Posted by cptwhite_uk - Thu 26 Aug 2021 11:29
Super were previously matching RRP for a mid-cycle bump of around 8-10% performance, which was fair enough. Now we're looking at 10% (if we're lucky), for a price bump, 1 year later…

I wonder where they will position the “Super” models in comparison to the “Ti” models, both in terms of stated MRRP and Performance. We've not really had them in direct competition before, except for the 1660 I suppose, which would suggest they slot just below the Ti variant but close to the Vanilla MRRP ….so 3060 Super at £349, with performance 3-4% below the 3060 Ti ….this can all be yours for 1 minute, sometime in October/November.