The launch of the Nvidia GeForce RTX 3060, 3070, and 3080 GPUs for laptops left some feeling a little disappointed. Enthusiasts were less than enthused, as the specs of the mobile GPUs were quite cut down compared to their desktop counterparts. Now there are signs that Nvidia is cooking up some mobile GPU updates, and they are going to be 'Super'. 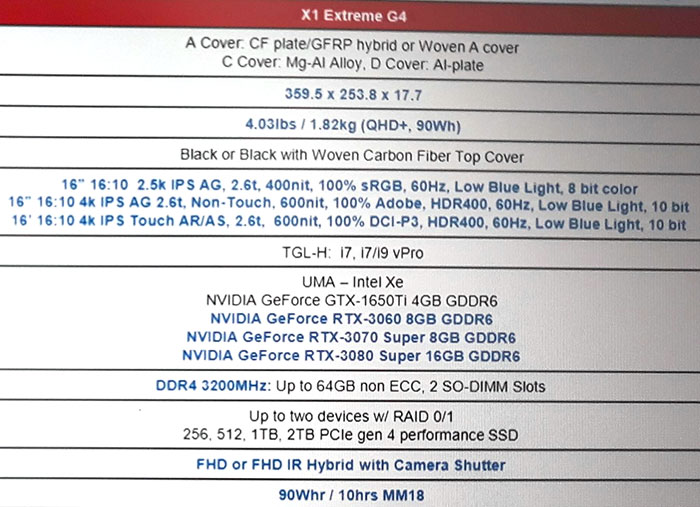 Nvidia hasn't used Super branding with its RTX30 series GPUs thus far, so it is an interesting decision to see it here in the laptop space, while the desktop series gets peppered with Ti tweener GPUs. However, there has already been a Ti added to the Laptop series with the GeForce RTX 3050 Ti recently introduced – making the lineup unnecessarily messy perhaps.

We don't have much in the way of specs for the new RTX 30 Super Laptop GPUs but VideoCardz made the table above, containing the known specs and these parts nestled amongst the existing set of Ampere Laptop GPUs.

Moving our focus back to the carbon fibre and Mg-Al alloy constructed Lenovo ThinkPad X1 Extreme G4 gaming laptop, it does indeed have some charms. It is one of the increasingly popular 16-inch designs, with various panel spec choices from 2.5 to 4K IPS with touch. All the options are 16:10 with HDR400 and with decent colour gamut/accuracy, but none can refresh faster than 60Hz max. Other highlights are the HDMI 2.1 port and 2x Thunderbolt 4 ports (supporting DP1.4), a 10-hour battery life, FHD Windows Hello IR webcam, and the 2.5K display model weighs in at just 1.82kg.