UL Benchmarks is pleased to announce that PC gamers submitted over a million benchmark results with 3DMark last month. Hoping to build on this milestone, the benchmark maker has some interesting additions to the testing suite, purposed to provide more meaningful comparisons, and give a better indication of AAA gaming performance. UL Benchmarks has thus revamped 3DMark and its UI to provide two key changes:

The above features are surfaced from the all-new results screen, pictured below. With regard to benchmark score comparisons a graph shows the distribution of scores from people who have the same CPU and GPU combo. Your own result will be indicated by a green vertical line slicing the bell curve. "If your score is close to the average, it means your PC is working as it should. A score well below the average could indicate a hardware or configuration problem." UL Benchmarks explained in its email to HEXUS. "The best score gives you an idea of the overclocking potential of your setup". 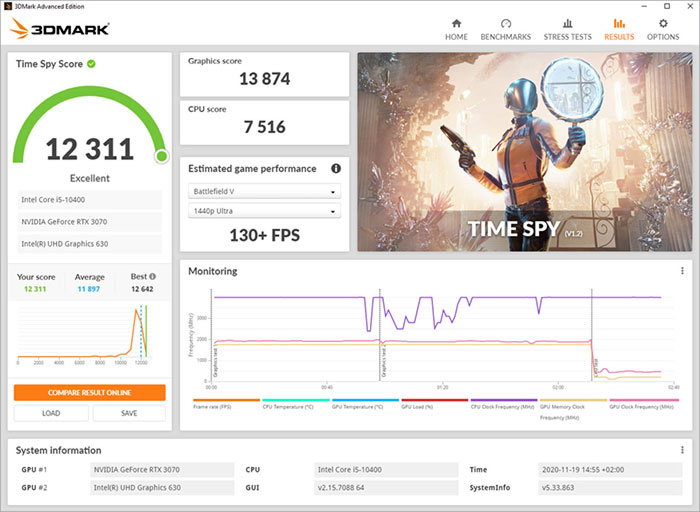 In the middle section of the new results UI, directly beneath your benchmark graphics and CPU scores you will find the estimated game performance tool. In this first release with this feature, 3DMark has integrated estimates for five games; Apex Legends, Battlefield V, Fortnite, GTA V, and Red Dead Redemption 2. Additionally you can check either the 1080p Ultra or 1440p Ultra settings. None of these settings include raytracing features turned on. Behind this feature is "extensive data from UL’s in-house testing". 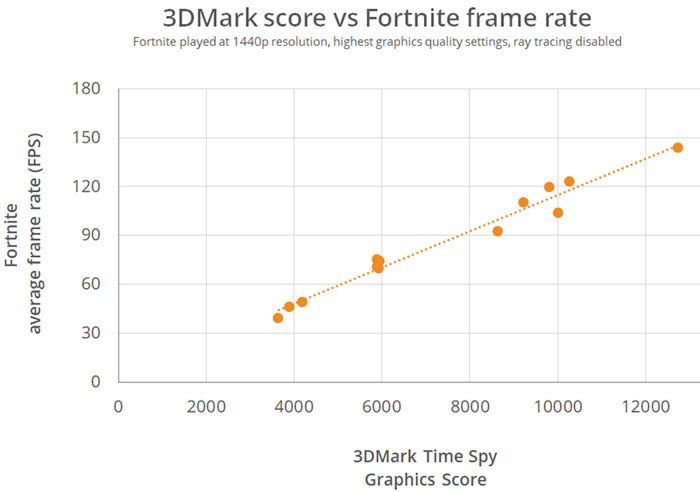 Backing up its game performance estimate intelligence claims, UL Benchmarks says it tests hundreds of PC systems for retail partners and you can see the chart above which plots 3DMark score vs Fortnite frame rate to see a clear relationship.

The revamped 3DMark is available now via the usual channels. You will need the Advanced Edition or better for game performance estimates. At the time of writing this edition is 85 per cent off (US$4.49) via Steam or the UL Benchmarks website (until 1st Dec).

Being out of the gaming/performance scene for a long time I'm unclear on something, is 3DMark as ‘big’ as it used to be? Are they updating to remain relevant or against some other competitor?
Posted by towell - Thu 26 Nov 2020 17:23

Being out of the gaming/performance scene for a long time I'm unclear on something, is 3DMark as ‘big’ as it used to be? Are they updating to remain relevant or against some other competitor?

I mean they've added RTX/DLSS specific benchmarks and stuff so yeah they're keeping up. People still use it to quantify overclocks and stuff.
Posted by kalniel - Thu 26 Nov 2020 17:33
It's best put to use as above, qualifying changes you're making to your own system - some of the premium features are testing specifics like VRS, PCI-E bandwitdh etc. which again might be of use when finding out what your own bottlenecks are.

This update is pretty much the first time they're trying to correlate 3D mark to real world relevance, and it's only for a few games, but it's a step in the right direction.
Posted by Millenialwithsky - Thu 26 Nov 2020 23:31
Bought in the Steam Autumn sale, thanks for the heads up!
Posted by EvilCycle - Fri 27 Nov 2020 11:49
Userbenchmark seems a better way to compare with the outside world, but it's never going to be completely accurate and there are too many competitive LN2 fuelled runs in the top end of these things for it to really mean anything anyway. Just stick to using it to compare your own systems and to try out new features I say.