The Nvidia GeForce RTX 3060 Ti leaks continue, with supposedly just one week left before official launch. In recent hours various sources have spotted benchmarks of this mid-range graphics card, which is expected to cost about US$399/ UK£349. The benchmarks include a Crazy 1080p run in Ashes of The Singularity (AoTS) and various Geekbench graphics tests. It is worth noting that we have already seen what looks to be a genuine Nvidia presentation slide charting the performance of the RTX 3060 Ti against both the 2060 Super and 2080 Super in a number of AAA games with RTX On and off.

Starting with the newly unearthed AoTS run, you can see how the new Nvidia GeForce RTX 3060 Ti fits in the stack next to a stablemate, the RTX 3070, and vs rivals like the AMD Radeon RX 6800 and 6800 XT. 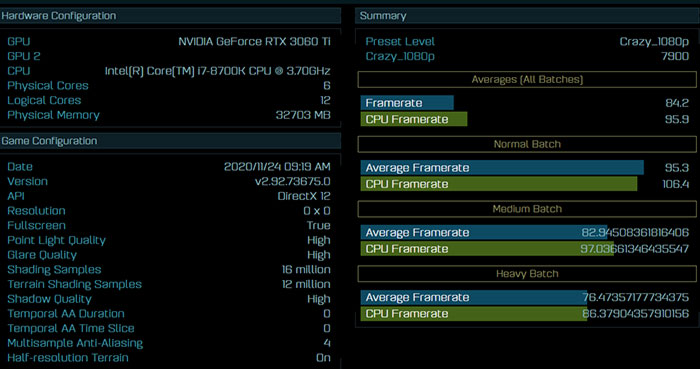 The RTX 3060 Ti score in the AoTS benchmark is about 14 per cent down from the RTX 3070. However, we expect the price of the upcoming entrant to the RTX 30 Series to be 25 per cent lower. It doesn't really challenge the AMD RDNA 2 GPUs in this test, so perhaps an upcoming Radeon RX 6700/X will be the price/perf competitor to the RTX 3060 Ti.

Serial leakster Tum Apisak has shared some Geekbench data which appears to come from someone testing the RTX 3060 Ti in said benchmark suite. An info page from the program confirms some key configuration details – 4,864 CUDA cores, GPU clock of 1.67GHZ, and 8GB of 14Gbps memory.

It's cool, AMD will be able to offer you a card with similar performance for a similar price, also not available to buy anywhere until February next year.
Posted by CAT-THE-FIFTH - Wed 25 Nov 2020 15:39

cptwhite_uk
It's cool, AMD will be able to offer you a card with similar performance for a similar price, also not available to buy anywhere until February next year.

Apparently people are thinking this generation is great as there is no price increase over the last!! Lets forget about Turing pushing prices up,and AMD deciding to rebadge the RX680/RX690. Just have a few cards as FE/reference at RRP,and hide the real street price!