The Nvidia GeForce RTX 3080 isn't that easy to get a hold of right now, and that may be a good thing as it seems that there are teething issues with the product. Reports of gamers crashing back to the desktop appeared to be increasing last week, suggesting there was something tangibly related to the GeForce RTX 3080 rather than various unknown system configurations falling over.

By the middle of the week sites like ComputerBase and VideoCardz decided the weight of evidence, indicating something was amiss with the GeForce RTX 3080, was worthy of a report. The story was that "in a certain group of games… as soon as the clock speeds reach a certain level [>2.0GHz], the game crashes to desktop," summed up VideoCardz. At that time no major Nvidia AIB partner had gone public with a statement about the reported user issues. To make the issue go away users were recommended to underclock/undervolt their RTX 3080 GPUs using the usual OC tools.

Over the weekend several AIBs have released official statements about the unfortunate instabilities. VideoCardz has collected them together this morning but most seem to be saying that 'it isn't us, we have followed Nvidia's specs carefully', or similar. Probably the clearest and most comprehensive answer to the underlying issue and why some products might be more susceptible than others has come from EVGA's Jacob Freeman. 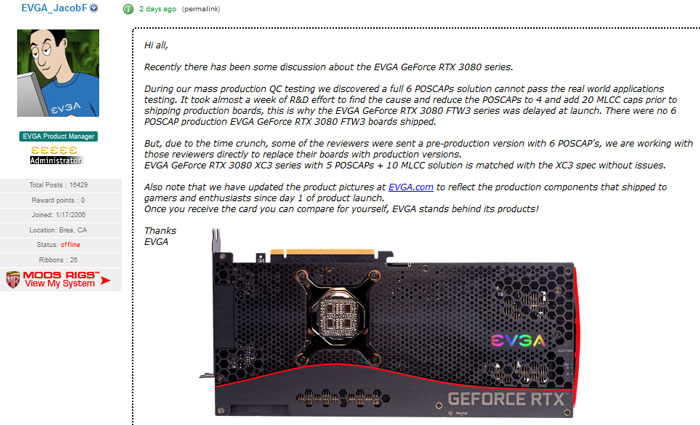 Freeman wrote about EVGA's R&D and quality control testing of its RTX 3080 models on the EVGA forums on Saturday. "During our mass production QC testing we discovered a full 6 POSCAPs solution cannot pass the real world applications testing. It took almost a week of R&D effort to find the cause and reduce the POSCAPs to 4 and add 20 MLCC caps prior to shipping production boards, this is why the EVGA GeForce RTX 3080 FTW3 series was delayed at launch. There were no 6 POSCAP production EVGA GeForce RTX 3080 FTW3 boards shipped," wrote the EVGA product manager. Please note that POSCAPs and MLCC caps are varieties of capacitors with their own strengths/weaknesses.

EVGA says that some pre-production graphics cards were sent to reviewers with different POSCAPs / MLCC configurations due to time constraints. Its production version of the EVGA GeForce RTX 3080 XC3 will feature 5 POSCAPs + 10 MLCC which is certified issue free (earlier models had 6 POSCAPs).

Here is a purported POSCAPs VS MLCC market snapshot.

Of the other AIB replies, Inno3D issued the very simple and forthright assertion, via Andreas Schilling, that "Inno 3D/iChill GeForce RTX 30 Series products do not have any instability problems". Some big players like Asus, Gigabyte, and MSI are still to make statements about this crash to desktop issue.

Posted by Kanoe - Mon 28 Sep 2020 11:38
Igors Lab did a good article on possible reasons why Link
Posted by EasterEEL - Mon 28 Sep 2020 11:40
Who would be an early adopter! I'm still smarting that my Gigabyte 1080ti failed one week outside warranty and they did not honour the £60 repair pledge advising they no longer stocked the part needed. That was power related part failure.
Posted by me-yeah - Mon 28 Sep 2020 12:12
it is probably caused by everyone's dodgy memory overclocking, with the best game for testing would be doom 2016 ( or eternal i have not bothered with ) the texture cache is in physical memory instead of VRam, so everything is taken from physical RAM per frame throughout the whole map and is one of the main reason's the game can easily run at 200 FPS on low end systems
Posted by kalniel - Mon 28 Sep 2020 12:29

To make the issue go away users were recommended to underclock/undervolt their RTX 2080 GPUs using the usual OC tools.

Quite how that's going to help the 3080 problems I don't know :p

me-yeah
with the best game for testing would be doom 2016 ( or eternal i have not bothered with ) the texture cache is in physical memory instead of VRam, so everything is taken from physical RAM per frame throughout the whole map

kalniel
Quite how that's going to help the 3080 problems I don't know :p

I spotted that too. Maybe to make 3080 users feel better when they have to downvolt theirs too?