Last week, in the wake of the GeForce RTX 30 series Ampere graphics card announcement from Nvidia I wrote a summary of what AIB partners were already showing off as potential GPU investments for PC enthusiasts and gamers. 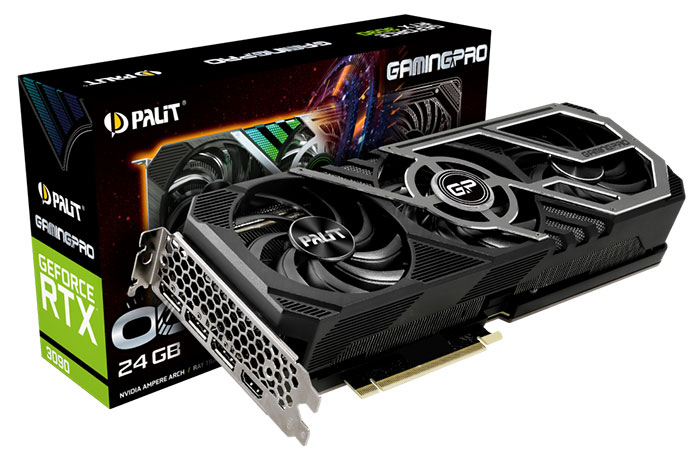 At that time Nvidia partners were forbidden, or reluctant, to reveal various key tech specs but I noted that Palit's GeForce RTX 3090 (OC), 3080 (OC), and 3070 specs had slipped through the net. What was quite striking about the specs revealed by Palit was the tiny boost clock difference between its Gaming Pro regular and 'OC' models. In either case they were just 30MHz faster out of the box, and people would be expected to cough up more hard earned cash for these 'OC' products? 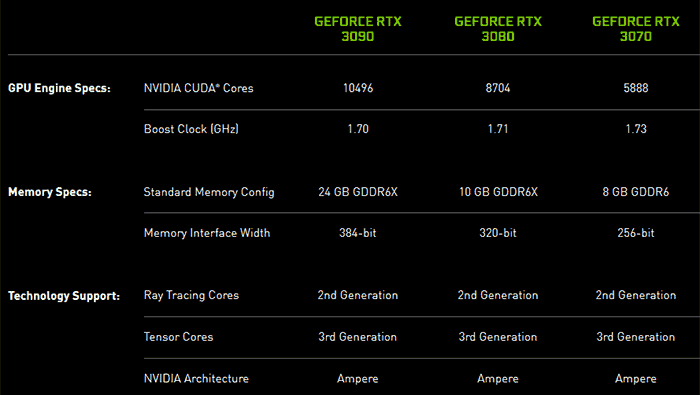 You can now view the official Founders Edition boost clocks on the Nvidia GeForce site, which has been updated since announcement day (see cropped screenshot above). You can see that the boost clocks of the GeForce RTX 3090, 3080, and 3070 FE are 1.70GHz, 1.71GHz, and 1.73GHz respectively. So, Palit's OC models even less impressive.

With the poor looking overclocks, very sizable coolers, and redesigned power inputs (with up to 3x 8-pin connectors) some enthusiasts were wondering about the RTX 30 series ( 8nm Ampere GPU) with regard to overclocking potential. Well, thanks to some teasing by EVGA and Zotac, it looks like there are some RTX 30 series cards waiting in the wings that provide meaningful overclocks, which could precipitate visible differences in game frame rates, for example.

CyberPunkCat spotted something interesting in the EVGA GeForce RTX 30 Series with iCX3 Technology, which we shared last Tuesday. If you stop the video at the right time you get a glimpse of the EVGA Precision Game Bar control panel operating next to an image of an EVGA GeForce RTX 3090 FTW3 (Ultra). The control panel reports an OC of 2.105GHz, with 1100mV, and a GPU temperature sitting at 35°C (temp indicating the card is not under duress). However, there is a possibility that the image is a mock up by a creative working for EVGA, rather than an actual screengrab. 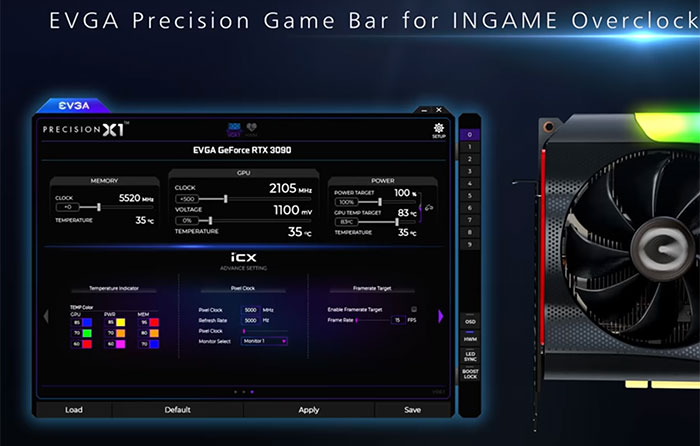 Moving on to a more direct tease, VideoCardz spotted Zotac sharing a screenshot of its OC control panel on a machine packing its new FireStorm RTX 3080 graphics card. There surely can't be any mistake here as it is clear and upfront displaying a GPU that is overclocked to 1.933GHz, with 40 per cent fan speed and 45°C GPU temp.

As a reminder, the first circa £649/$699 GeForce RTX 3080 cards will become available in 10 days time. It will be interesting to see the speed champs on the day and their prices, but they will likely be beaten in the weeks/months to come with custom water block and All-in-One cooler versions etc.

lumireleon
for the price 3090 should have been HBM2

maybe, but HBM2 would just increase the price further, and also complicate production as well as overclocking due to the HBM's nature

let alone that the GDDR6 and X are co-developed with micron and nvidia (far more lucrative deal for them) and hey.. techncially GDDR6 is faster than HBM2 if opted for 384bit bus, and G6X just makes it even beter, so why downgrade to HBM2?