You are here:
Graphics Enterprise News

Nvidia has published a curious video, which shows the CEO taking what looks like a DGX-1 out of his oven at home. The video is called "What's Jensen been cooking" and this piece of tech whimsy is under 30 seconds long. I've embedded it below for your convenience.

If you were to watch the above video on the YouTube page you would be able to click and reveal the description, which reads as follows: "The world’s largest graphics card, fresh out of the oven." Mr Huang, says as much, though not very clearly, at the end of his video appearance.

Looking carefully at what the Nvidia CEO took out of his oven, it looks very much like previous DGX-1 deep learning server systems based upon Pascal and Volta GPU architectures. One must presume, with this being 'fresh out of the oven', that it is an Ampere GPU based DGX-1 system. 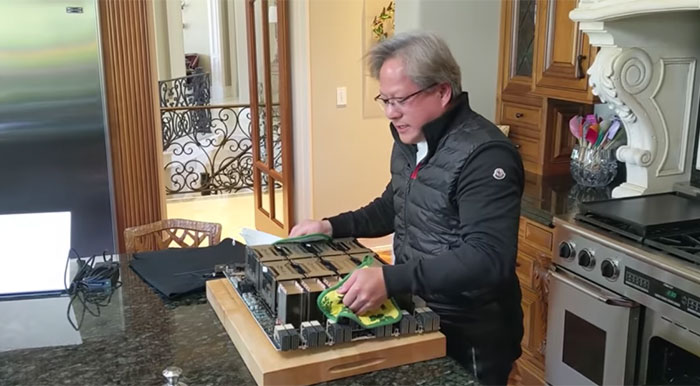 Of course, Huang has been very busy with his silicon cooker at home to get ready for the GTC Keynote on Thursday. In less than 48 hours time we hope to be able to pick through the announcements made via the Nvidia YouTube channel (Keynote video release is scheduled for 2pm UK time). 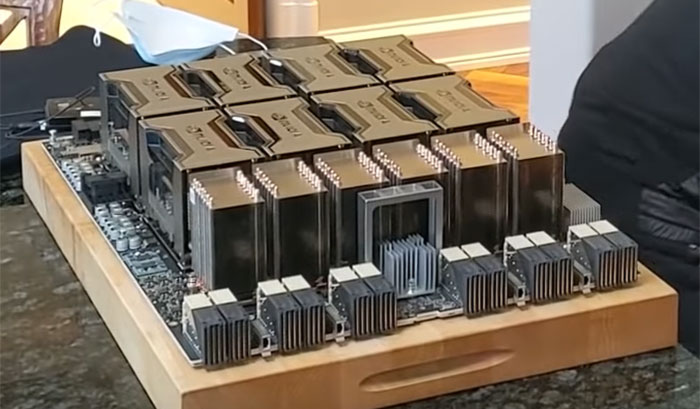 Chopping board not included

It is looking less likely that we will get any directly consumer-pleasing announcements on Thursday. In the purported leak we looked at earlier today, indications are that consumer Ampere graphics cards won't be unwrapped until September, to coincide with the delayed Cyberpunk 2077 release. You can read more about that here.

Thanks to the HEXUS tipster for the alert.

Must admit, I thought something along these lines, but I would have destroyed the delivery.