Over the weekend Nvidia and CD Projekt Red indulged in some Twitter teasing for a special edition GeForce graphics card to commemorate the upcoming Cyberpunk 2077 video game release. Now Nvidia has gone official with the product, sharing images and a video of a specially crafted GPU which will be a version of its top end consumer graphics card, the GeForce RTX 2080 Ti.

The previous teaser image didn't give much away but the new video and images provide an excellent preview of what will be a limited edition product. How limited? Just 200 will be made, says Nvidia. How will you be able to buy one with such limited stock? You won't, Nvidia will not be selling these beauties, they will feature in various social media giveaways and charity auctions. 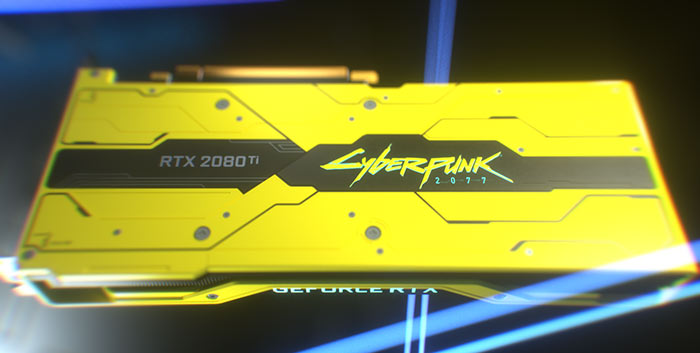 To kick off the giveaways, Nvidia has 77 available in what it has dubbed the 'RTX On Sweepstakes'. TO participate you have to complete a couple of tiresome social media tasks on Twitter, Instagram or Facebook . In brief you have to reply to one of these posts via retweet, like or comment, then save something positive about a fellow gamer, tag them and include the #RTXOn hashtag. 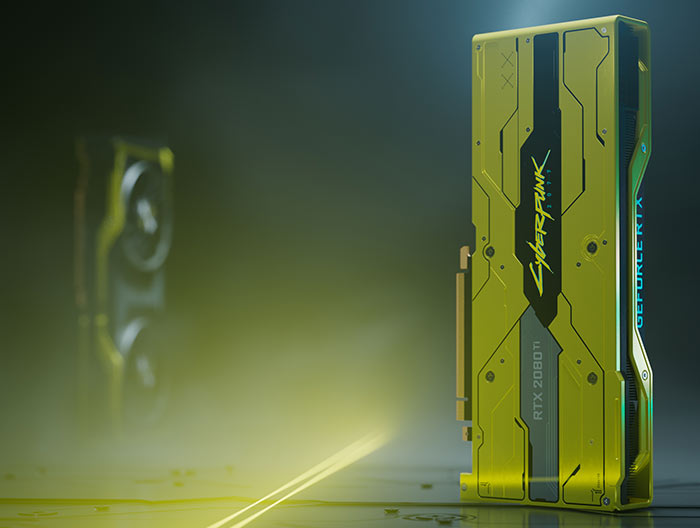 If you are one of the 77 lucky ones who win a GeForce RTX 2080 Ti Cyberpunk 2077 Edition you will receive one of the cards, as pictured. Nvidia provides a smattering of extra details about this product; it features a custom AL5052 aluminium shroud, with Cyberpunk 2077’s signature yellow styling, and it comes in a gift box which will look great on your hardware shelf. Underneath the twin fan shroud you will have a powerful GeForce RTX 2080 Ti GPU.

If you are planning on playing Cyberpunk 2077 at launch with raytracing effects there isn't anything else in the consumer space now that can beat this card. Obviously as such an object of desire, the resale values of these cards on places like eBay looks set to be astronomical.

HEXUS has previously reviewed Nvidia's reference Edition GeForce RTX 2080 Ti, as well as samples from the likes of MSI, and the liquid cooled Inno3D iChill Black.

Posted by Rubarb - Tue 18 Feb 2020 11:45
Should be a nice card once it's stripped down and an after market cooler added or water cooled :D
Posted by Rejuvination - Tue 18 Feb 2020 11:45
“You must be a legal resident of AUSTRALIA, AUSTRIA, BELGIUM, CANADA (EXCLUDING THE PROVINCE OF QUEBEC), COLOMBIA, CROATIA, CZECH REPUBLIC, DENMARK, FINLAND, FRANCE, GERMANY, GREECE, IRELAND, JAPAN, NEW ZEALAND, NORWAY, PERU, POLAND, SOUTH KOREA, SPAIN, SWITZERLAND, TAIWAN, THE NETHERLANDS, UNITED KINGDOM, THE UNITED STATES OF AMERICA (EXCLUDING PUERTO RICO AND ITS OTHER TERRITORIES AND POSSESSIONS) and you must be eighteen (18) or older to be eligible to participate.”

PC-LAD
You understand that forums are a form of social media?

Until there's summat like that on here, you'll be counting many of us out…
Shame, as it doesn't look too bad!